Six miles west of Amboy once stood the town of Bagdad, which has been totally obliterated today. You will also pass by the old sites of Siberia and Klondike, which, like Bagdad, are nothing more than names on an old map. At last, you reach Ludlow, where you finally see some signs of life. 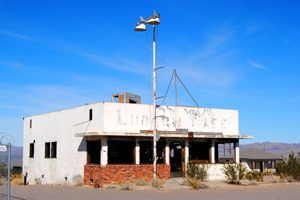 Remains of the old Ludlow Cafe, 2015, by Kathy Weiser-Alexander.

Though Ludlow is a virtual ghost town, you will see a few open businesses due to its proximity to I-40. Founded in 1882 as a water stop for the Central Pacific Railroad, the water was hauled from Newberry Springs in tank cars. Before long, gold was discovered in the area and Ludlow began to grow until the mining petered out in the early 1900s. Declining for the first time, Ludlow saw a revival when Route 66 came through, becoming a busy rest stop along the new highway. Ludlow died a second death when I-40 replaced the Mother Road. Though there are still a few people living in the area, supporting the service businesses along the interstate, the town is mostly littered with the decaying buildings of its former past.

On the other side of the railroad tracks behind the old settlement of Ludlow is an interesting cemetery surrounded by a rusty wire fence. Here, nameless graves are marked by a couple of dozen wooden crosses, leaving no testament to those who died here many years before.

The original road dies beyond Ludlow, as it once traveled to the south side of I-40. However, by joining the north frontage road, you will soon be riding on the real thing again in about two miles. 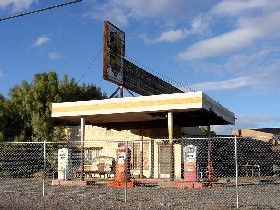 About thirty miles beyond Ludlow, you will come to Newberry Springs, which has long been a source of water in the dry Mojave Desert. Though the town wasn’t founded until 1911, the wagon trains heading to California on the old Mormon Trail in the mid 1800s made this place a regular stopping point along their travels. Located on an ancient lake, Newberry Springs has a large basin of underground water, the first water point for wagon trains west of the Colorado River.

While in Newberry Springs, be sure to visit the Bagdad Cafe, a Route 66 survivor that was once called the Sidewinder Cafe. Behind a high chain link fence, you can also view the remains of an old Whiting Brothers Gas Station.

Continuing to travel another 12 miles or so, you will reach Daggett, a town rich in history. Originally founded in the 1860s, the town boomed when silver was discovered in the Calico Mountains north of Daggett in the early 1860’s. Just a few years later, borax was also discovered and began to be actively mined. Daggett soon became the mining supply and support center for the many mines in the area. 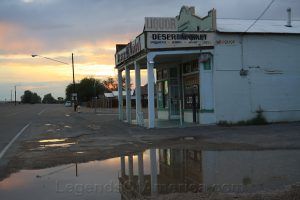 The sunsets on Desert Market in Daggett, California on historic Route 66. Photo by Jim Hinckley.

By 1902, Daggett was supported by three borax mines, had three saloons, two restaurants, a lumberyard, several stores, and the old Stone Hotel.

There are several vintage in buildings in Daggett including Alf’s Blacksmith Shop, which has been standing since 1894; the Stone Hotel, built in the 1870s, said to have hosted the likes of Governor John Daggett, Tom Mix, and Wyatt Earp; and a one time Visitors Information Center that opened in 1926. Now, a private residence, this building once invited newcomers to California as well as housing a cafe and service station.

Before heading on down the Mother Road to Barstow, be sure to take a side trip just seven miles north of Daggett to the historic ghost town of Calico, California.