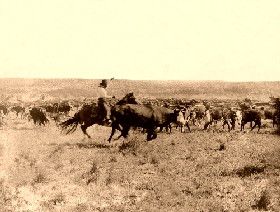 Joel Collins was an outlaw who rode with Sam Bass and other desperadoes who pulled off one of the greatest train robberies in the Old West – the Big Springs train robbery in Nebraska. Collins was working as a bartender in San Antonio, Texas when Sam Bass met him. Both were avid horse racing fans and quickly hit it off. Before long, the pair were running a crooked horse racing operation. For a year, the pair traveled about the Texas race-track circuit until the professional horsemen caught on to their scheme.

Collins, who had made four cattle drives from Texas to the Kansas cowtowns from 1871 to 1874, soon devised another scheme. Well known in the area, Collins soon bought a herd of several hundred cattle to be driven north. To finance the sale, he signed several promissory notes to pay after the cattle were sold. He, along with Sam Bass and another man named Jack Davis, then drove the herd north to Ogallala, Nebraska, where they the herd for $8,000.

However, instead of returning to Texas to pay off the notes, they headed to the gold-filled hills of Deadwood, South Dakota. Arriving in the fall of 1876, they found mining impossible due to snow and freezing rains. Undaunted, they moved on to other pursuits. Jack Davis built a brothel for a prostitute named Maud, while Bass and Collins began a freighting outfit. However, all three spent more time at the poker tables, drinking, and frequenting the “ladies” than they did on their businesses. Before long, their money was gone and the trio turned to outlawry. Three more men joined them, namely Tom Nixon, Bill Heffridge, and Jim Berry. The gang, known as the Black Hills Bandits, first robbed a number of stagecoaches in the Deadwood area, killing one stage driver. 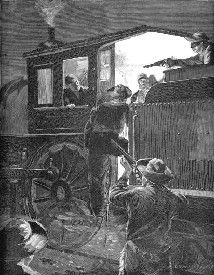 Finding stagecoach robberies not profitable enough, when split with six people, they soon decided to rob a train. On September 18, 1877, they robbed the Union Pacific Railroad at Big Springs, Nebraska, making off with more than $60,000. After dividing the money, the outlaws split up into pairs, each headed in a different direction. Joel Collins, along with Bill Heffridge rode south along the Republican River to Buffalo Station (now Gove), Kansas. There, they were recognized and authorities were notified.

As the pair were preparing to move on south to Texas, they were approached by Ellis County Sheriff George Bardsley and ten cavalry troopers from Fort Hays. Seemingly calm and innocent, Collins and Heffridge agreed to return with Bardsley to the station for questioning. As they were traveling there; however, Collins pulled his pistol, shouting “By God! Let’s die game!” However, with the cavalry right there, the outlaws were killed before they were able to fire their own weapons. Some $20,000 in gold coins were recovered hidden in a pair of pants.

Their bodies were then taken to Ellis, Kansas where they were positively identified and buried at the local cemetery. Though the old graveyard today has a number of unmarked graves, there is no way to determine which belongs to the outlaws.

In the meantime, James Berry would be killed in Missouri, and later, Sam Bass would die in Round Rock, Texas in an ambush by Texas Rangers. Tom Nixon and Jack Davis; however, were never apprehended.