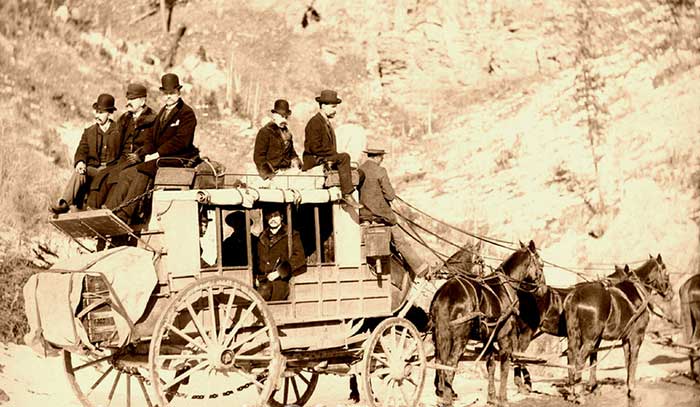 Perhaps the most historic stagecoach in existence is the famous Deadwood coach, which was carried for many years by Buffalo Bill in his Wild West shows all over America and Europe. This coach was built by the Abbott-Downing Company, of Concord, New Hampshire, in 1863, fitted with the thorough brace springs which made the Concord coaches the most popular used on the great trails.

This coach, in company with many others, was shipped to San Francisco, California via Cape Horn, in 1864, and was used for many years in the mountains of California. Eventually traveling the trails across the Rocky Mountains, it came into possession of the stage company operating in eastern Wyoming and the Black Hills.

The Black Hills booms were then in full sway, filled with men of all characters, with every business or vocation running in full blast, and prosperity at its fullest height. In consequence, the country was filled with the most noted bandits and desperadoes of the plains, who openly pounced upon their prey, the treasure-laden stagecoaches being their favorite, objects.

The most prominent of these highwaymen were Pegleg Bradley, Dunk Blackbird, Bill Price, and Charley Grimes. The Deadwood coach’s first baptism came with the killing of a driver, John Slaughter, in the White Wood Canyon. He was filled with buckshot, but the teams ran away, and the coach arrived safely at Greeley Station, thus outwitting the bandits.

From now on the coach went through several baptisms of fire, generally escaping without loss of life or treasure, until a drummer from Chicago was killed and a companion injured. The Indians also attempted on several occasions to hold up the stage but were successfully repelled.

The stage was fitted up as a treasure-stage to carry the gold from Deadwood to the railroad, and a number of shotgun messengers accompanied the coach on its trips to and fro. These shotgun messengers were men of a reputation as killers. Gail Hill, Jesse Brown, Jim May, Boone May, and Scott Davis, all well-known characters who had performed some deadly exploits and were known dead-shots, composed the force of gunmen that defended the coach; but despite this protection, the bandits, by treachery, successfully staged the Cold Spring tragedy.

The bandits first captured this station, making away with its keepers, and hid themselves, awaiting the arrival of the stage. Soon the stage arrived, and Jean Barnet, not suspecting danger, drew his teams to a standstill at the stable door. A crashing volley killed Hugh Stevenson and Gail Hill and wounded the other guards, making resistance impossible. Over $60,000 in gold was secured by the outlaws. A little later the coach was again attacked. The first volley killed the driver, and just as the bandits felt sure of success, a woman, Martha Canary, who afterward became known as “Calamity Jane,” who was riding on the seat with the driver, seized the lines, gave the whip to the team, and amid a running fire brought the coach safely into its destination.

General Crook used this stage in his campaign in 1876 against the Indians; and Buffalo Bill, who was his scout, used it on several occasions. After the campaign Buffalo Bill learned that the coach had been abandoned during an Indian attack and was lying neglected, away out in the hostile country, so, with a few companions, he proceeded to rescue and bring it back to camp.

The coach continued its daily trips on the Black Hills stage line until Buffalo Bill organized his Wild West shows. He secured possession of the historic coach, using it to depict the drama of overland staging in the Wild West.

Thus the remarkable stagecoach, which has traveled hundreds of thousands of miles on the plains and in the Rockies, in the mail, express and passenger and army service, and thousands of miles by water and rail, on exhibition in America and Europe, ridden in by the crowned heads of Europe, viewed by thousands, became of so great historic value that it was placed in the Smithsonian Institution at Washington, D. C., for preservation. [Today, the coach is at the Buffalo Bill Historical Center, an affiliate of the Smithsonian Institution in Cody, Wyoming.]

Though the stage line was more familiarly called the Deadwood Stage, it was officially called the Cheyenne & Black Hills Stage. It was established in 1876 by Red Cloud Agency trader, Captain F. D. “Frank” Yates and his father-in-law, W. H. Brown, who formed  F. D. Yates and Co. Though several attempts had been made prior to this time to establish a route from Cheyenne, Wyoming to Deadwood, South Dakota, but no one had been successful due to the many Indian attacks. However, Yates was successful and the first stage was run on September 25, 1876. Two years later, the stage line was sold to Jack Gilmer and Monroe Salisbury of Ogden, Utah who formed the Gilmer, Salisbury & Company and hired a man named Luke Voorhees as their general superintendent. Two years later Gilmer and Salisbury sold their interest to their superintendent, 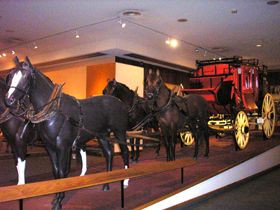 The Deadwood Stage in the Buffalo Bill Historical Center in Cody, Wyoming by Kathy Weiser-Alexander.

Luke Voorhees, who continued to operate the line until about 1882. The line was next owned by Russell Thorp, Sr. who also operated a stage line between Douglas and Wendover,  Wyoming. However, its life was doomed as the Fremont, Elkhorn and Missouri Valley Railroad pushed into central Wyoming and the Black Hills in 1886. The last coach was driven across the route in February 1887.

The line was operated under Mr. Thorp’s management until 1886, when the Chicago & Northwestern Railroad built a line from Fremont, Nebraska, to Lander, Wyoming, and the Cheyenne & Northern, now the Colorado & Southern, built a line from Cheyenne to Wendover. Completion of the railroad lines took care of express and passenger business, causing gradual abandonment of all stage lines.

During the eleven years that the stage line was in service, it was often the target of road agents, anxious to get their hands on the gold and money coming out of Deadwood.

After the company went out of business Buffalo Bill Cody bought one of the coaches and used it in his Wild West Show. It is now on display at the Buffalo Bill Historical Center in Cody, Wyoming.

Stagecoaches of the Old West