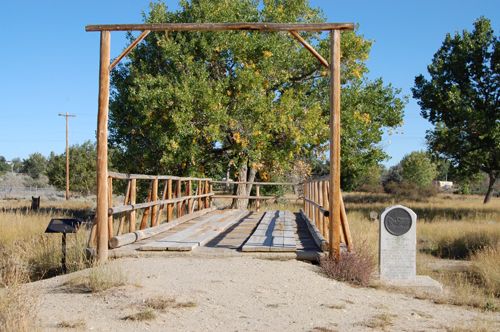 A replica of Guinard’s Bridge at Fort Caspar today by Kathy Alexander.

The predecessor of Fort Caspar, Wyoming (1865-67) was Platte Bridge Station, established in 1858 as one of a series of fortified stations on the Oregon-California Trail.

Located on the south side of the North Platte River at a crossing point and emigrant campground, the Platte Bridge post protected wagon trains, mail stages, and the supply-communication lines of the Mormon Expedition to Utah (1857-58). Adjacent to the fort, at a place known as Mormon Ferry, emigrants crossed the river, operated by some Mormons in 1847-50 and after that by a private company.

In 1859, Louis Guinard built a trading post and 1,000-foot toll bridge at the site, and that same year the army troops abandoned the station. The trading post would later serve as an overnight stage stop for the Overland Stage, Pony Express relay station, and telegraph office. 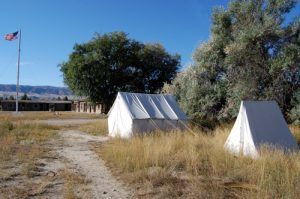 In 1861, volunteer cavalry was ordered to Guinard’s Bridge to guard against the increasingly frequent Indian Raids. The following year, the trading post became a one-company military post and was officially renamed Platte Bridge Station.

In response to the 1864 Sand Creek Massacre of Black Kettle’s Cheyenne by Colonel Chivington’s militia in Colorado Territory, Plains tribes increased raids along the trails the following spring. In Sioux and Cheyenne warriors, including Red Cloud, Old Man Afraid of His Horse Roman Nose, and Dull Knife, began to threaten the bridge. On July 26th, when an eastern bound Army wagon train was due to come in, Lieutenant Caspar Collins led his men to drive off the hostile Indians. As Collins and his troops crossed the bridge, they were quickly driven back by the Indians and in the battle that ensued, Collins and four other soldiers were killed. The battle became known as the Battle of Platte Bridge Station. 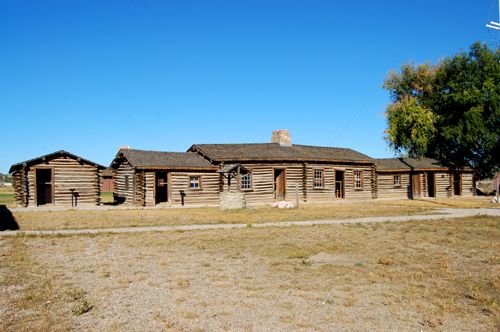 Later that same day, Sergeant Amos Custard and his men were bringing five supply wagons in from the Sweetwater Station near Independence Rock. As they came into view of the Platte Bridge Station, the Indians began to attack the train. Unaware of the morning’s skirmish, Custard was barely able to assume a defensive position before the battle occurred. After four hours, the Indians overran the soldier’s position. Sergeant Custard and 20 of his men were killed. Only three of the five men on advance patrol survived. The skirmish is known as the Battle of Red Buttes. Shortly after these skirmishes, the Army officially renamed the outpost Fort Caspar in honor of the fallen lieutenant. Through an Army error, the spelling of the post and the city that grew up adjacent to it were spelled “Casper.”

Troops enlarged and rebuilt the fort in 1866, but when the Union Pacific Railroad and the new transcontinental telegraph reached Cheyenne, Wyoming in the fall of 1867, migration along the Oregon-California-Mormon Pioneer Trail dramatically began to wane. The army then established new installations to protect the railroad route across southern Wyoming. On October 19, 1867, orders were issued to abandon Fort Casper, and troops and materials, including some of the buildings, were transferred to Fort Fetterman, Wyoming. Almost immediately after the troops were gone, the Indians burned the buildings and the bridge.

What was left quickly fell into ruins, and by the 1870s, the site of the old post became part of the CY Ranch. In 1936, Casper citizens and the Works Progress Administration (WPA) reconstructed parts of the fort and the Platte Bridge Station using sketches made by Caspar Collins and others in the 1860s. In the 1980s, a replica of the Mormon ferry and a reconstructed section of the Guinard bridge were added to the grounds.

Today, the City of Casper operates a museum at the site, listed on the National Register of Historic Places and features the reconstructed log buildings, wooden stockade, bridge, and ferry. Inside the museum, exhibits feature the history of the Plains Indians, ranching, the energy industry, the western emigrant trails, frontier army, and the City of Casper. Guided tours are available and a number of special events and programs throughout the year. 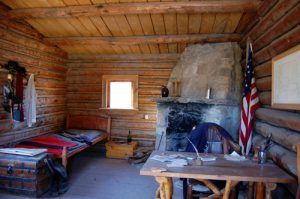