Although I was but a girl of 11 years, I distinctly remember many things connected with that far-off time when all of our western country was a wilderness. We were six months in crossing the plains in ox-wagons.

In our home, in Illinois, in the early 1850s, there was much talk and excitement over the news of the great gold discoveries in California — and equally, there was much talk concerning the wonderful fertile valleys of Oregon Territory and an act of Congress giving settlers 640 acres of land.

My father, John Tucker Scott, with much of the pioneer spirit in his blood, became so interested that he decided to “Go West.” The spring of 1852 ushered in so many preparations, great work of all kinds. I remember relations coming to help sew, of tearful partings, little gifts of remembrances exchanged, the sale of the farm, the buying and breaking in of unruly oxen, the loud voices of the men, and the general confusion.

The first of April came — 1852. The long line of covered wagons, so clean and white, but, oh so battered, torn and dirty afterward. The loud callings and hilarity — many came to see us off. We took a last look at our dear homestead as it faded from our view. We crossed the Illinois River on a ferry. We looked back and saw our old watchdog (his name was Watch) howling on the distant shore. Father had driven him back, saying, “Go back to Grandfather, Watch!” But, he never ate afterward, and soon died. We stopped at St, Joseph, Missouri, to get more provisions. We had never before seen Negroes, and all along this state we saw many negro huts and went into one to see some little negro babies. My remembrance of the state was muddy roads, muddy water and a sort of general poverty — of course, this was over 70 years ago. 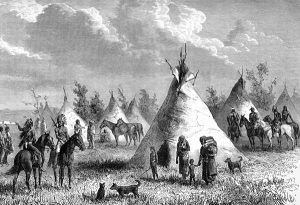 When we crossed into Nebraska, it seemed such a wide stretch of plain. We got our first sight of Indians — a group of them passing along, single file. They were the Potawatomi, dressed in buckskins, beads, and leading their ponies. An open country was now before us. The melting snows had made the streams high, the roads nearly impassable. The Platte River, swift and swollen, didn’t seem to have any banks. We had heard of the danger of quicksands. My father had, with the help of his drivers, raised the beds of his wagons, so as not to dip water. When everything was in readiness, all of us were tucked inside the wagons. My father put me, last of all, inside the back end of the last wagon, told me to keep still, and not be afraid. The loud voices of the drivers as they yelled and whipped up the oxen, the jogging of the wagons through the surging waters and over the quicksands, the memory is with me yet. When they got over the river, all were accounted for, but, they couldn’t find me. Finally, I was pulled out from under the bows, nearly smothered. There were nine of us children, ranging from four years to my eldest sister, who was about 19.

My mother kept the two youngest with her always in “Mother’s wagon.” Her health was not very good, and she had dreads and fears, but, hoped she would live to get to Oregon. Fate willed it otherwise, and being frail and weary with the long journey, she fell a victim to the cholera, so prevalent that year on the plains, leaving her sorrowing family to grieve for her. When we reached Wyoming, there in the Black Hills, this side of Fort Laramie, the passing of that dear, beloved mother was a crushing blow to all our hopes. We had to journey on, and leave her in a lonely grave — a feather bed as a coffin, and the grave protected from the wolves by stones heaped upon it. The rolling hills were ablaze with beautiful wild roses — it was the 20th of June, and we heaped and covered mother’s grave with the roses so the cruel stones were hidden from view. Her grave is lost. No one was ever able to find it again.

The old emigrant trail holds many hard experiences. Coming to the Snake River and for many miles along, it was impossible to reach it to get water for the oxen. We had to travel all night at times. On one occasion the camp was made after dark, and there was such a stench in the air. Early daylight found us camped close between two dead oxen, on one side, and a dead horse on the other — so we had to move before breakfast. 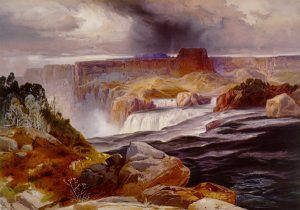 About two miles above the great American Falls we were able to get the cattle down to drink. It so happened that after the yokes of the oxen were removed and the oxen were driven into the water, an old headstrong bull plunged into the river and swam across, the rest of the cattle following, except two cows that our man was able to keep back. Our company was in great peril.  My father, generally equal to any emergency, decided that any one or more of the men who were good swimmers, should go above our camp, swim over and drive the cattle back. This was attempted by two young men, one of whom swam over first on one of our mares; the other was drowned, and as we, with agonized eyes, watched the stream, we saw the white face of our old mare “Sukey” bobbing up and down in the boiling waters. She was such a loved old mare that we could not bear to leave her at home in Illinois. A third man tried and got safely over. We could see his naked form over the river among the hot burning rocks. It was impossible for him alone to drive the cattle back. My father made a mighty effort to get across. Then he ordered the calking of one of the wagon beds to make a boat, and in this, three more paddled over and took some clothing to cover the poor sunburnt men on the rocks — he was over there in that awful predicament for three days; his skin all peeled off, and he nearly lost his mind from his awful experience. They got the cattle safely over the river again, but, the two cows that stayed behind ate of something poisonous and died during the night. 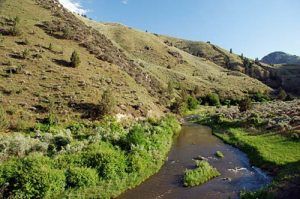 On and on we journeyed — averaging 15 miles a day over cactus, sagebrush, and hot sand. Everybody’s shoes gave out and we bartered with Indians for moccasins, but, that didn’t help much about the prickly pears. One by one, the oxen fell by the way. We came to Burnt River — a most desolate country. Here, our baby brother, Willie, fell sick. It was in the heat of August. The train was halted, that the darling child of four years could be better cared for, but, he became unconscious and passed away. The soil here was thin and full of rocks. My poor father, broken-hearted, had the men cut a cavity out of the solid rock jutting out of Burnt River Mountain, and here, the little form was sealed beside where the only living thing was — a little juniper tree. My brother Harvey found it, twenty years later, and he peeled some of the bark off of the juniper tree and brought it back to my father. My father had carved Willie’s name on the tree.