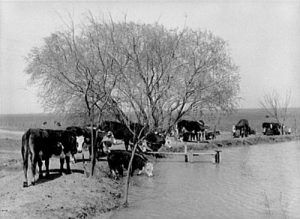 Continuing their journey, the emigrants proceeded to Beaver City, and thence to Parowan. Grain was scarce this year, and the emigrants were unable to purchase all they desired for their stock, though for their own immediate necessities they obtained what they required at this place. Arriving at Cedar City, they succeeded in purchasing about fifty bushels of wheat, which was ground at a mill belonging to John D. Lee, formerly commander of the fort at Cedar City, but then Indian agent, and in charge of an Indian farm near Harmony.

It is alleged by the Mormons, and on good authority, that during their journey from Salt Lake City to Cedar the emigrants were guilty of further gross outrage. If we can believe a statement made in the confession of Lee, a few days before his death, Isaac C. Haight, president of the stake at Cedar City, accused them of abusing women, of poisoning wells and streams at many points on their route, of destroying fences and growing crops, of violating the city ordinances at Cedar City, and resisting the officers who attempted to arrest them. These and other charges, even more improbable, have been urged in extenuation of the massacre; but little reliance can be placed on Lee’s confession, and most of them appear to be unfounded. It must be admitted, however, that rather than see their women and children starve, they perhaps took by force such necessary provisions as they were not allowed to purchase.

Near Cedar City the Spanish trail to Santa Fé branched off from what was then known as Frémont’s route. About thirty miles to the south-west of Cedar, and within fifteen of the line of the route, are the Mountain Meadows, which form the divide between the waters of the great basin and those that flow into the Colorado. At the southern end of the meadows, which are four to five miles in length and one in width, but here run to a narrow point, is a large stream, the banks of which are about ten feet in height. Close to this stream the emigrants were encamped on the 5th of September, almost midway between two ranges of hills, some fifty feet high and four hundred yards apart. On either side of their camp were ravines connected with the bed of the stream.

It was Saturday evening when the Arkansas families encamped at Mountain Meadows. On the Sabbath they rested, and at the usual hour one of them conducted divine service in a large tent, as had been their custom throughout the journey. At daybreak on the 7th, while the men were lighting their camp-fires, they were fired upon by Indians, or white men disguised as Indians, and more than 20 were killed or wounded, their cattle having been driven off meanwhile by the assailants, who had crept on them under cover of darkness.

The survivors now ran for their wagons, and pushing them together so as to form a corral, dug out the earth deep enough to sink them almost to the top of the wheels; then in the centre of the enclosure they made a rifle-pit large enough to contain the entire company, strengthening their defenses by night as best they could. Thereupon the attacking party, which numbered from three to four hundred, withdrew to the hills, on the crests of which they built parapets, whence they shot down all who showed themselves outside the entrenchment.

The emigrants were now in a state of siege, and though they fought bravely, had little hope of escape.

All the outlets of the valley were guarded; their ammunition was almost exhausted; of their number, which included a large proportion of women and children, many were wounded, and their sufferings from thirst had become intolerable. Down in the ravine, and within a few yards of the corral, was the stream of water; but only after sundown could a scanty supply be obtained, and then at great risk, for this point was covered by the muskets of the Indians, who lurked all night among the ravines waiting for their victims.

Four days the siege lasted; on the morning of the 5th a wagon was seen approaching from the northern end of the meadow, and with it a company of the Nauvoo legion. When within a few hundred yards of the entrenchment, the company halted, and one of them, William Bateman by name, was sent forward with a flag of truce. In answer to this signal a little girl, dressed in white, appeared in an open space between the wagons. Half-way between the Mormons and the corral, Bateman was met by one of the emigrants named Hamilton, to whom he promised protection for his party on condition that their arms were surrendered, assuring him that they would be conducted safely to Cedar City. After a brief parley, each one returned to his comrades.

By whose order the massacre was committed, or for what reasons other than those already mentioned, has never yet been clearly ascertained; but as to the incidents and the plan of the conspirators, we have evidence that is in the main reliable. During the week of the massacre, Lee, with several other Mormons, was encamped at a spring within half a mile of the emigrants’ camp; and, as was alleged, though not distinctly proven at his trial, induced the Indians by promise of booty to make the attack; but, finding the resistance stronger than he anticipated, had sent for aid to the settlements of southern Utah. Thus far the evidence is somewhat contradictory. There is sufficient proof, however, that, in accordance with a program previously arranged at Cedar, a company of militia, among whom were Isaac C. Haight and Major John M. Higbee, and which was afterward joined by Colonel William H. Dame, bishop of Parowan, arrived at Lee’s camp on the evening before the massacre.

It was then arranged that Lee should conclude terms with the emigrants, and, as soon as they had delivered themselves into the power of the Mormons, should start for Hamblin’s rancho, on the eastern side of the meadows, with the wagons and arms, the young children, and the sick and wounded. The men and women, the latter in front, were to follow the wagons, all in single file, and on each side of them the militia were to be drawn up, two deep, and with twenty paces between their lines. Within two hundred yards of the camp the men were to be brought to a halt, until the women approached a copse of scrub-oak, about a mile distant, and near to which Indians lay in ambush. The men were now to resume their march, the militia forming in single file, each one walking by the side of an emigrant, and carrying his musket on the left arm.