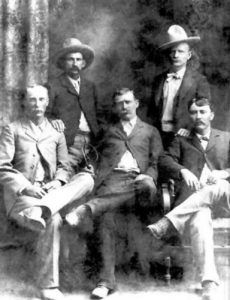 Just four days after that indictment, Riggs was arrested by his brother-in-law, Sheriff Bud Frazer on a gun-carrying charge and brought before County Judge George M. Frazer, Bud’s father, and Barney’s father-in-law. However, because of the relationship, the case was transferred to another district and was later dismissed.

Bud Frazer and Jim Miller would have two gunfights, one in April and the other in December, but, both men would survive. Having lost the 1894, re-election, Frazer then made his way Carlsbad, New Mexico where he operated a livery stable.

In early 1896, two of Miller’s henchmen, John Denson and Bill Earhart, were overhead in Fort Stockton muttering threats against Barney Riggs. Later, they left for Pecos, Texas to seek out Riggs.  U.S. Deputy Marshal Dee Harkey wired a telegram of warning and when they arrived Riggs avoided them. However on the morning of March 3rd, as Riggs was substituting for a friend as a  bartender in R.S. Johnson’s Saloon, he was alone.

Denson and Earhart burst into the room and a shot from Earhart grazed Barney, who instantly fired back killing the other man. He then grappled with Denson before he was able to flee. Riggs followed and as Denson was running away, shot him in the back of his head, killing him on the spot. Riggs surrendered himself. Though tried for murder, Riggs was acquitted.

Later that year, Riggs’ brother-in-law, Bud Frazer would not be so lucky. While visiting his family in Toyah, Texas, he was assassinated by Jim Miller on September 14, 1896.

Over the next several years, Riggs continued his drunken and violent antics and finally, his wife, Annie left him. She then began running the Koehler Hotel in Fort Stockton, Texas. During their separation, Barney pulled a number of stunts and constantly harassed her when he was intoxicated. She was granted a divorce in March 1901.

A provision of the divorce settlement required periodic child support payments and Daniel J. “Buck” Chadborn, the 21-year-old husband of Annie’s daughter by a previous marriage was named as the trustee to handle the payments. Barney resented Chadborn’s involvement in the matter and was quick to loudly berate the young man at every opportunity. A year later, Chadborn petitioned the court to relieve him of the responsibility, but, the furious Riggs was still angry and beat him with a cane in April 1902. The very next day, when Riggs spied Chadborn again, he once again approached the young man, brandishing a cane. When Riggs made a threatening move towards Chadborn, the younger man shot Riggs in the chest. Riggs was then taken to the Koehler Hotel where he died the next day.

Barney Riggs was buried in the old fort cemetery at Fort Stockton. Also buried there is his old partner, A.J. Royal.

Daniel J. “Buck” Chadborn was indicted for second-degree murder and tried in Brewster County in October 1903, but was found not guilty. He then moved on to New Mexico where he had a long career in law enforcement, serving as a deputy sheriff and U.S. customs agent.

In 1904, Annie Riggs purchased the hotel where she worked and changed the name to the Riggs Hotel. She operated it successfully for many years before she died in May 1931. Today, the building continues to stand as the Annie Riggs Museum in Fort Stockton.

R.S. Johnson’s Saloon in Pecos, Texas, where Riggs killed Miller’s henchmen William Earheart and John Denson, is part of the West of the Pecos Museum. There is a plaque on the floor designating the spot where Denson was killed. 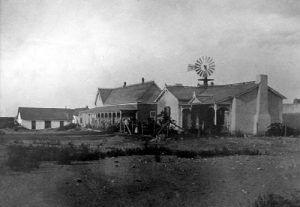 The Koehler Hotel in 1900. Annie Riggs later bought the property and changed the name to the Riggs Hotel. Today, it is the Annie Riggs Memorial Museum.

Though the notorious Jim Miller would continue with his wicked ways for the next few years, he too would finally get his just end when he was hanged by vigilantes in Ada, Oklahoma in 1909.