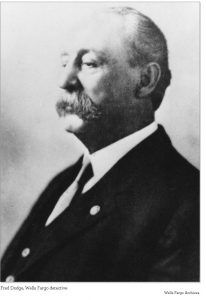 Fred Dodge was born at Spring Valley, California on August 29, 1854 and raised in Sacramento. When he grew up, he went to work as an undercover agent for Wells Fargo, working in California, Nevada, and Arizona. In December 1879, he was working in Tombstone, Arizona and recommended that Wyatt Earp be hired as a guard and messenger for the stage line. The two quickly became good friends and Dodge supported Wyatt and his brothers in their troubles in Tombstone after the Gunfight at the O.K. Corral and during the Earp Vendetta Ride. He and Wyatt remained friends for the rest of their lives.

Dodge was an integral part in the investigation into the “Bisbee Massacre,” on December 8, 1883, where six desperados left four people dead inside the Goldwater and Castenada Store in Bisbee.

In the end, five of the killers would be legally hanged, and when the sixth man, John Heath, was sentenced to life in prison, a vigilante group descended upon the Tombstone jail, where Heath was being held and lynched him.

Later, Dodge was elected constable of Tombstone, while still working undercover for Wells Fargo, where he solved a number of train and stage robberies. In December 1890, Dodge went to work “openly” for Wells Fargo in Texas, where he worked on a number of cases, not only in the Lone Star State but also in Oklahoma. He was known to have teamed up with U.S. Deputy Marshal Heck Thomas, in the pursuit of the Doolin-Dalton Gang.

While he and his wife, Patsy, and daughter, Ada, were vacationing in Leon Springs, Texas, they fell in love with the hill country and in 1906, Dodge purchased 2,000 acres, which he called the Dodge Ranch near Boerne, Texas.  He retired from Wells Fargo in 1917 and settled down on his ranch.

After his first wife died, he remarried a woman named Jessie in 1917 and the couple had a son named Fred James Dodge, Jr. the following year. Dodge continued to live on his ranch until his death at the age of 84 on December 17, 1938. He was buried at the Boerne Cemetery in Kendall County, Texas.

During his long career as a detective, Dodge was described as an intelligent and determined investigator. He was also an extremely meticulous man, who kept a daily diary of his activities and travels, collecting some 27 journals over the years. These would later be used as research for two books — The Life and Times of Wyatt Earp and Undercover for Wells Fargo.