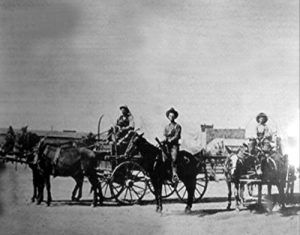 John Denson was the son of Mary Jane Clements, a sister to Mannie Clements, and cousin to John Wesley Hardin, and had a reputation as bad as the rest of the clan.

Having hooked up with the likes of Killin’ Jim Miller, to whom he was related by marriage, Denson got emerged in the Frazer-Miller Feud in Pecos, Texas, which began in 1892. Miller who had worked for Reeves County Sheriff, Bud Frazer, was fired by Frazer, at which time the feud began. After a scheme by Miller to kill Frazer backfired when it was overheard by a man named Con Gibson, in May 1893, Miller, Mannie Clements, and Martin Hardin were arrested for conspiracy to commit murder. The trial was scheduled to be held in El Paso, Texas, but, a very afraid Con Gibson fled. He was shot and killed by John Denson in a saloon in Eddy (now Carlsbad,) New Mexico on June 1, 1894.

Afterward when Denson didn’t like how the local newspaper, the Eddy Current, which had reported the killing, he attacked editor William H. Mullane with a club. For that, Denson was fined only $5.00. In September 1894, Denson was accused of invading the home of Mrs. Juan Aureloa and attempting to rape the woman. When her husband came to her defense, Denson fired off four shots. He was arrested and bound over on $300 bail. Later that year, Denson got into an altercation with a gambler and sometime law officer named Richard Alonzo “Lon” Bass, wounding him slightly. Denson was again arrested. In March 1895, John Wesley Hardin, who had studied law in prison and was, by then,  an attorney, came to defend his cousin Denson who was facing multiple charges. After arranging for bail, Denson skipped town and soon made his way to Pecos, Texas, where he joined up with Jim Miller once again.

In early 1896, Jim Miller determined that he wanted a man named Barney Riggs, who was the brother-in-law of Bud Frazer, to be killed. He soon hatched a plan with Denson and another man named Bill Earhart to kill Riggs, who was said to have been the only man that Miller ever feared. However, while Denson and Earhart her discussing the scheme in a Fort Stockton saloon they were overheard by a saloon patron who notified U.S. Deputy Marshal Dee Harkey who wired a telegram of warning to Riggs. When the criminal pair arrived in Pecos, Texas Riggs initially avoided them. However on the morning of March 3, 1896, as Riggs was substituting for a friend as a  bartender in R.S. Johnson’s Saloon, he was alone. Denson and Earhart burst into the room and a shot from Earhart grazed Barney Riggs, who instantly fired back killing the other man. He then grappled with Denson before the would-be assassin was able to flee. Riggs followed and as Denson was running away, shot him in the back of his head, killing him on the spot. Riggs surrendered himself. Though tried for murder, Riggs was acquitted.