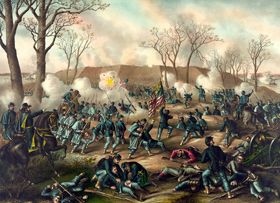 Fort Donelson (February 11-16, 1862) – After capturing Fort Henry on February 6, 1862,  General Ulysses S. Grant advanced cross-country to invest Fort Donelson. On February 12-13, the Union made several small probing attacks, and on February 14th, U.S. Navy gunboats under Flag-Officer Andrew H. Foote attempted to reduce the fort with naval gunfire. However, they were forced to withdraw after sustaining heavy damage from Donelson’s water batteries. The next day, the fort was surrounded by Union troops, and the Confederates, commanded by Brigadier General John B. Floyd, launched a surprise attack against Grant’s army, attempting to open an avenue of escape.

Grant, who was away from the battlefield at the start of the attack, arrived to rally his men and counterattack. Despite achieving partial success, Floyd lost his nerve and recalled his men to their entrenchments.

On the morning of February 16th, Floyd and his second-in-command, Brigadier General Gideon J. Pillow, both turned over their command to Brigadier  General Simon Bolivar Buckner, who agreed to unconditional surrender terms from Grant. The estimated casualties of the battle were 2,331 U.S. and 15,067 Confederate. This was a major victory for General Grant and a catastrophe for the South. It ensured that Kentucky would stay in the Union and opened up Tennessee for a Northern advance along the Tennessee and Cumberland Rivers. Grant received a promotion to major general for his victory and attained stature in the Western Theater. 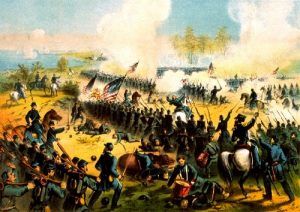 Shiloh (April 6-7, 1862) – Also called the Battle of Pittsburg Landing, this battle took place in Hardin County, Tennessee. As a result of Forts Henry and Donelson’s fall, Confederate General Albert Sidney Johnston, the commander in the area, was forced to fall back, giving up Kentucky and much of West and Middle Tennessee. He chose Corinth, Mississippi, a major transportation center, as the staging area for an offensive against General Ulysses S. Grant and his Army of the Tennessee before the Army of the Ohio, under Major General Don Carlos Buell, could join it. The Confederate retrenchment was a surprise, although a pleasant one, to the Union forces, and it took Grant, with about 40,000 men, some time to mount a southern offensive, along the Tennessee River, toward Pittsburg Landing. Grant received orders to await Buell’s Army of the Ohio at Pittsburg Landing.

Grant did not choose to fortify his position; rather, he set about drilling his men, many of which were raw recruits. Johnston originally planned to attack Grant on April 4th, but delays postponed it until the 6th. Read More …

The Union troops would continue into Corinth, Mississippi, where opposing forces would battle between April 29-June 10, 1862. When General P.G.T Beauregard evacuated the town, the Union had consolidated their position, ending the Cumberland and Tennessee Rivers Campaign.

Joint Operations Against New Madrid, Island No. 10, and Memphis (February-June 1862) 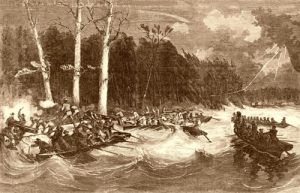 Pope and Foote planned to take the fort, but Pope was ordered to join Major General Henry W. Halleck’s army at Shiloh, Tennessee. Without adequate troops, Foote could only threaten Fort Pillow. In response, Confederate Colonel M. Jeff Thompson’s River Defense Fleet, commanded by Captain James E. Montgomery, attacked the Union troops with a makeshift fleet on May 10, 1862. Though the Confederates were outgunned, they took the Union fleet by surprise and sink two U.S. Ironclads — the Cincinnati and Mound City. After just 30 minutes, the Confederates withdrew to Fort Pillow. Both of the Federal warships were sunk in shallow water and were soon put back into commission. Later, Fort Pillow was discovered abandoned, and when the Battle of Memphis took place the following month, the Confederate fleet would be destroyed.

Memphis (June 6, 1862) – After the Confederate River Defense Fleet, commanded by Captain James E. Montgomery and Brigadier General M. Jeff Thompson of the Missouri State Guard, bested the Union ironclads at Plum Run Bend, Tennessee, on May 10, 1862, they retired to Memphis. Confederate General P.G.T. Beauregard ordered troops out of Fort Pillow and Memphis on June 4th, after learning of Union Major General Henry W. Halleck’s occupation of Corinth, Mississippi. Thompson’s few troops camped outside Memphis, and Montgomery’s fleet was the only force available to meet the Union naval threat to the city. From Island No. 45, just north of Memphis, Union Flag-Officer Charles H. Davis and Colonel Charles Ellet launched a naval attack on Memphis after 4:00 am on June 6th. Arriving off Memphis at about 5:30 am, the battle began. In the hour and a half battle, the Union boats sank or captured all Confederate vessels; General Van Dorn escaped. Immediately following the battle, Colonel Ellet’s son, Medical Cadet Charles Ellet, Jr., met the mayor of Memphis and raised the Union colors over the courthouse. Later, Flag-Officer Davis officially received the surrender of the city from the mayor. The Indiana Brigade, commanded by Colonel G.N. Fitch, then occupied the city. Memphis, an important commercial and economic center on the Mississippi River, had fallen, opening another Mississippi River section to Union shipping. The estimated casualties of the battle were 1 Union and 180 Confederate.