Major General Ambrose Burnside, commander of the Department of the Ohio, undertook this campaign into East Tennessee to clear the roads and gaps to Virginia and reduce or extinguish Confederate influence in the area. The ultimate goal was to secure the saltworks beyond Abingdon, Virginia, if possible.

Blountsville (September 22, 1863) – Major General Ambrose Burnside, commander of the Department of the Ohio, undertook an expedition into East Tennessee to clear the roads and gaps to Virginia and, if possible, secure the saltworks beyond Abingdon. In Sullivan County, Tennessee, Union Colonel John W. Foster, with his cavalry and artillery, engaged Colonel James E. Carter and his troops at Blountsville on September 22nd. Foster attacked at noon and in the four-hour battle, shelled the town and initiated a flanking movement, compelling the Confederates to withdraw. Blountsville was the initial step in the Union’s attempt to force Confederate Major General Sam Jones and his command to retire from East Tennessee. The Union victory resulted in 27 Union casualties and 165 Confederate.

Blue Springs (October 10, 1863) – While the Union was continuing to clear the roads and passes to Virginia,  Confederate Brigadier General John S. Williams, with his cavalry force, set out to disrupt Union communications and logistics. He wished to take Bull’s Gap on the East Tennessee & Virginia Railroad. On October 3rd, while advancing on Bull’s Gap, he fought with Brigadier General Samuel P. Carter’s Union Cavalry Division, 23rdI Army Corps, at Blue Springs, about nine miles from Bull’s Gap, on the railroad. Carter, not knowing how many of the enemies he faced, withdrew. Carter and Williams skirmished for the next few days. On October 10th, Carter approached Blue Springs in force. Williams had received some reinforcements. The battle began about 10:00 am, with Union cavalry engaging the Confederates until afternoon while another mounted force attempted to place itself in a position to cut off a Rebel retreat. Captain Orlando M. Poe, the Chief Engineer, performed a reconnaissance to identify the best location for making an infantry attack. At 3:30 pm, Brigadier General Edward Ferrero’s 1st Division, 9th Army Corps, moved up to attack, which he did at 5:00 pm. Ferrero’s men broke into the Confederate line, causing heavy casualties, and advanced almost to the enemy’s rear before being checked. After dark, the Confederates withdrew, and the Federals took up the pursuit in the morning. Within days, Williams and his men had retired to Virginia. Burnside had launched the East Tennessee Campaign to reduce or extinguish Confederate influence in the area; Blue Springs helped fulfill that mission. The Union victory resulted in about 100 casualties for the Union and 216 for the Confederates.

After the disastrous defeat at Chickamauga, Major General William Rosecrans and his men took refuge in Chattanooga, Tennessee. However, the only supply line that was not controlled by the Confederates was a roundabout, tortuous course nearly 60 miles long over Walden’s Ridge from Bridgeport, Alabama. The campaign was an effort to relieve the Union forces in the city, who, by the end of October, rations had been cut to  “four cakes of hard bread and a quarter pound of pork” every three days. 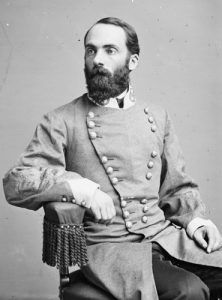 Wheeler’s Raid (October 1-9, 1863) – A large cavalry raid in southeastern Tennessee, Major General Joseph Wheeler’s Confederate cavalry scored a great initial success in cutting off supply lines to the Union Army. After the disastrous Battle of Chickamauga, Georgia, Major General William Rosecrans and his troops were pushed back to Chattanooga and desperately needed supplies and ammunition. There was only one avenue for supplies — the Sequatchie Valley Road, a winding, narrow path through the south Tennessee woods. Confederate General Braxton Bragg decided to deliver a final blow to the starving Federals by cutting off this lifeline and sent a reluctant Major General Joseph Wheeler, who questioned the ability of his already depleted force to carry out the order, to do the job. Wheeler quickly broke through the defensive screen of Brigadier General George Crook’s 2nd Cavalry Division near Decatur, Tennessee. Wheller was then joined by some of Brigadier General Nathan B. Forrest’s brigades and converged on the Sequatchie Valley and captured the Union supply trains.

Pursued by General Crook and his men, Wheeler galloped through the valley for the next week, destroying nearly everything in sight. During these nine days, he and his men destroyed or captured more than 1,000 supply wagons, hundreds of draft animals, two towns in Tennessee, five critical bridges, miles of railroads, and millions of dollars of supplies. However, Wheeler’s command was roughed up quite a bit by Union horseman, as Crooks men were able to push the Confederates back, deflect Wheeler from a supply base, recapture some Union supplies, and force Wheeler to escape across the Tennessee River.

At 3:00 am, on October 27th, portions of Hazen’s brigade embarked upon pontoons and floated around Moccasin Bend to Brown’s Ferry. Turchin’s brigade took a position on Moccasin Bend across from Brown’s Ferry. Upon landing, Hazen secured the bridgehead and then positioned a pontoon bridge across the river, allowing Turchin to cross and take a position on his right. Hooker, while his force passed through Lookout Valley on October 28th, detached Brigadier General John W. Geary’s division at Wauhatchie Station, a stop on the Nashville & Chattanooga Railroad, to protect the line of communications to the south as well as the road west to Kelley’s Ferry.

Observing the Union movements on the 27th and 28th, Confederate Lieutenant General James Longstreet and General Braxton Bragg decided to mount a night attack on Wauhatchie Station. Although the attack was scheduled for 10:00 pm on October 28th, confusion delayed it till midnight. Surprised by the attack, Geary’s division, at Wauhatchie Station, formed into a V-shaped battle line. Hearing the din of battle, Hooker, at Brown’s Ferry, sent Major General Oliver Otis Howard with two 11th Army Corps divisions to Wauhatchie Station as reinforcements. As more and more Union troops arrived, the Confederates fell back to Lookout Mountain. The Federals now had their window to the outside and could receive supplies, weapons, ammunition, and reinforcements via the Cracker Line.

Relatively few night engagements occurred during the Civil War; Wauhatchie is one of the most significant. Resulting in a Union victory, the estimated casualties were 420 Union and 408 Confederate.