Union Major General A.J. Smith, commanding a combined force of more than 14,000 men, left LaGrange, Tennessee, on July 5, 1864, and advanced south. Smith’s mission was to ensure that Major General Nathan Bedford Forrest and his cavalry did not raid Major General William T. Sherman’s railroad lifeline in Middle Tennessee and, thereby, prevent supplies from reaching him in his campaign against Atlanta. The first two battles of the campaign were fought in Mississippi at Tupelo and Brice’s Cross Roads. The third and final battle of the campaign was waged at Memphis, Tennessee. 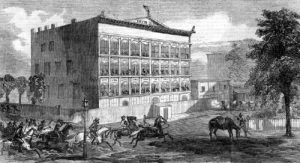 Memphis (August 21, 1864) – At 4:00 am on August 21, 1864, Confederate Major General Nathan Bedford Forrest made a daring raid on Union-held Memphis, Tennessee, occupied by 6,000 Federal troops. The raid was not an attempt to capture the city; rather, it had three other objectives: to capture three Union generals posted there, to release Southern prisoners from Irving Block Prison, and to cause the recall of Union forces from Northern Mississippi. Striking northwestward for Memphis with 2,000 cavalry troops, Forrest lost about a quarter of his strength because of exhausted horses. Surprise was essential. Taking advantage of a thick dawn fog and claiming to be a Union patrol returning with prisoners, the Confederates eliminated the sentries.

Galloping through the streets and exchanging shots with other Union troops, the raiders split to pursue separate missions. One Union general was not at his quarters, and another escaped to Fort Pickering dressed in his nightshirt. Irving Block Prison’s attack also failed when Union troops stalled the State Female College’s main body. After two hours, Forrest decided to withdraw, cutting telegraph wires, taking 500 prisoners and large quantities of supplies, including many horses. Although Forrest failed in Memphis, his raid influenced Union forces to return from northern Mississippi and provide protection. The Confederate victory resulted in an estimated 160 Union casualties and 34 Confederate. 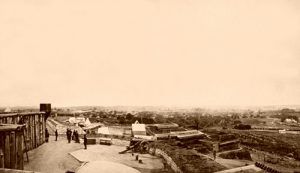 The Franklin-Nashville Campaign, also known as Hood’s Tennessee Campaign, was a series of battles in the Western Theater, conducted from September 18 to December 27, 1864, in Alabama, Tennessee, and northwestern Georgia.  The Confederate Army of Tennessee under Lieutenant General John Bell Hood drove north from Atlanta, threatening Major General William T. Sherman’s communications and central Tennessee lines. After a brief attempt to pursue Hood, Sherman returned to Atlanta and began his March to the Sea, leaving Union forces under Major General George H. Thomas to deal with Hood’s threat. The first two battles of the campaign were fought in Allatoona, Georgia, and Decatur, Alabama. Six more battles would be fought in Tennessee before the campaign ended.

Johnsonville (November 4-5, 1864) – To check the army’s advance through Georgia, Major General Nathan Bedford Forrest led a 23-day raid culminating in an attack on the Yankee supply base at Johnsonville, Tennessee. Swinging north from Corinth, Mississippi, toward the Kentucky border and temporarily blockading the Tennessee River at Fort Herman, Forrest then moved southward along the Tennessee River’s west bank, capturing several U.S. steamers and a gunboat which he later had to abandon. On November 4th, Forrest began positioning his artillery across the river from the Federal supply base and landing at Johnsonville. They discovered the Confederates finishing their entrenchments and battery emplacements in the afternoon of the 4th. The gunboats and land batteries, across the river, engaged the Confederates in an artillery duel. The Rebel guns, however, were so well-positioned, the Federals were unable to hinder them. In fact, Confederate artillery fire disabled the gunboats. Fearing that the Rebels might cross the river and capture the transports, the Federals set fire to them. The wind then extended the fire to the piles of stores on the levee and a warehouse loaded with supplies. Seeing the fire, the Confederates began firing on the steamboats, barges, and warehouses to prevent the Federals from putting out the fire. An inferno illuminated Forrest’s night withdrawal, and he escaped clutches without serious loss. Damages totaled $2.2 million. On the 5th, some Confederate artillery bombarded the depot in the morning but then left. Although this brilliant victory further strengthened Forrest’s reputation and destroyed a great amount of material, it failed to stem the tide of success in Georgia. The number of casualties is unknown.

Columbia (November 24-29, 1864) – Conflict near Columbia, Tennessee during Confederate General John Bell Hood’s 1864 Tennessee invasion constituted a Confederate diversion as part of a maneuver designed to cross the Duck River upstream and cut off the army’s line of communications with Nashville. As General John Bell Hood’s army advanced northeastward from Florence, Alabama, Major General John M. Schofield’s force quickly withdrew from Pulaski to Columbia, arriving on November 24th, just ahead of Forrest’s Confederate Cavalry. The Federals built two lines of earthworks south of the town while skirmishing with enemy cavalry on November 24th and 25th. Hood advanced his infantry on the following day but did not assault. He made demonstrations along the front while marching two corps of his army to Davis Ford, some five miles eastward on the Duck River. Schofield correctly interpreted Hood’s moves, but foul weather prevented him from crossing to the north bank before November 28th, leaving Columbia to the Confederates. The next day, both armies marched north for Spring Hill. Schofield had slowed Hood’s movement but had not stopped him. A Confederate victory, the number of casualties is unknown.

Spring Hill (November 29, 1864) – Spring Hill was the prelude to Franklin’s Battle. On the night of November 28, 1864, General John Bell Hood’s Army of Tennessee marched toward Spring Hill to get astride Major General John M. Schofield’s army’s lifeline. Cavalry skirmishing between Brigadier General James H. Wilson’s cavalry and Major General Nathan Bedford Forrest’s Confederate troopers continued throughout the day as the Confederates advanced. On November 29, Hood’s infantry crossed Duck River and converged on Spring Hill. In the meantime, Major General Schofield reinforced the troops holding the crossroads at Spring Hill. In the late afternoon, the Federals repulsed a piecemeal Confederate infantry attack. During the night, the rest of Schofield’s command passed from Columbia through Spring Hill to Franklin. This was, perhaps, Hood’s best chance to isolate and defeat the army. The engagement has been described as “one of the most controversial non-fighting events of the entire war.” The number of casualties of the victory is unknown.