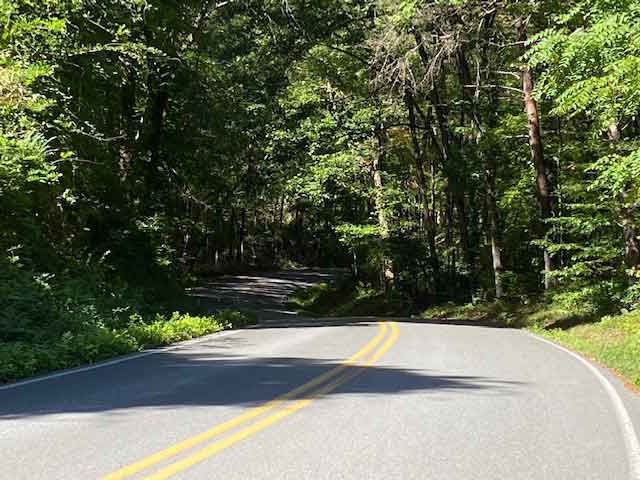 Shipley Hollow has been synonymously known as Pitty Pat Hollow for almost one hundred fifty-five years. Many colorful stories have come out of that part of Sale Creek – some true and some probably not so true. Two truths exist: (1) many people believe that they had an experience with some type of mysterious creature there, and (2) people who lived in that area long ago were afraid to venture along the road after dark. 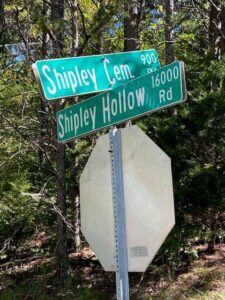 The pitty-pat is a shadowy creature that has inhabited that area since the late 1860s and has been the subject of ridicule, disbelief, fear, story-telling, entertainment, and many other descriptors; however, for many people who have encountered the pitty-pat, there is a sense of total belief and fear in its existence.

The first known stories about the Pitty Pat came about shortly after the Civil War. Those accounts appear to have taken place just past the hairpin curve at the McDonald Mill and Dam on Daugherty Ferry Road, also known as the Plank Road at that time. The original story involved a young woman accompanying her baby in a horse-drawn carriage. Supposedly, one night shortly after making the sharp turn and approaching the split between Shipley Hollow and Daugherty Ferry Road, the creature made its move on the couple and the horse. The horse sensed danger and spooked, taking off and eventually causing the buggy to overturn, spilling the passengers onto the roadside. The creature then carried off the baby, which was never seen again. That was the beginning of the set of horror accounts that came about over the next 153 or so years.

In the late 1890s, steamboat captain Samuel P. Elsea was in the process of returning to his home in the hollow one night when some type of shadowy creature got after him in the same area as where the young lady’s baby was carried off, just a couple of hundred yards past the Mill Dam. Samuel drove his poor nag like a Kentucky thoroughbred to the first house he passed, pulled up in the yard, and ran to the door. He is reported to have told the owner of the house that he was staying in his house that night because some kind of spook was close on his heels. After putting the horse in the barn, Sam told the resident to scoot over in the bed because “I’m staying with you tonight!”

Over the years, accounts of the original tragedy became the substance of many tales about the creature as yarn spinners entertained people with scary stories that became standard fare around candlelit parlors and living rooms. However, mixed in with all these tall tales, eventually, stories about real-life encounters with a shadowy figure began to filter into the conversations, stories about people seeing shadowy creatures and people being chased by them in the darkened area of Shipley Hollow. 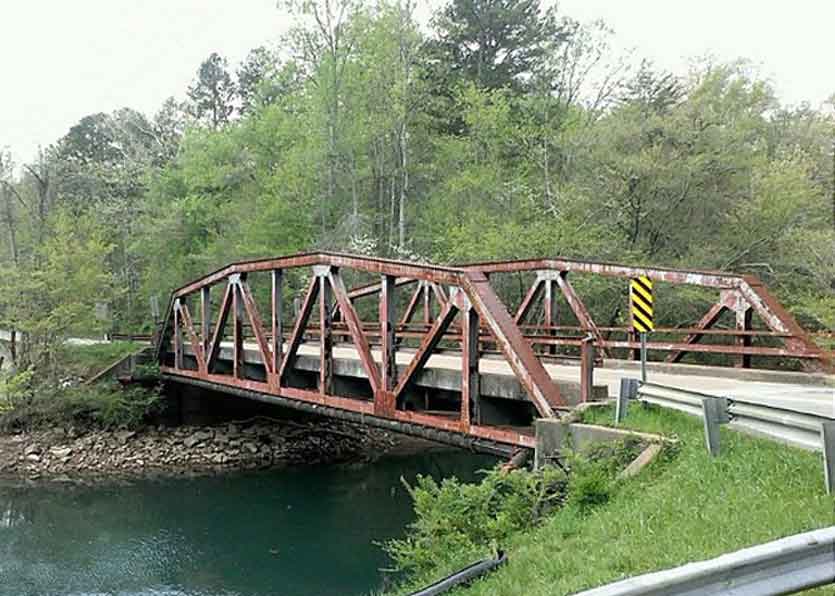 As previously stated, Shipley Hollow lies about a mile east of U.S. Highway 27 off Daugherty Ferry Road. The road forks right there, and the left fork goes into the shadowy hollow as Shipley Hollow Road. Along that stretch of road, the Pitty Pat tales got their start.

But let’s digress for a moment. The fact is that people enjoy having the living daylights scared out of them. Everyone is hungry for a good scary tale to come along, especially around Halloween, and the Pitty Pat provided just the medium to satisfy that hunger. I have seen older adults sitting around a dimly lit room telling all kinds of scary stories about the mysterious creature (many of them flat out lies) to a bunch of unsuspecting kids and scaring them so badly that they had to be led by the hand if they even wanted to go into the next room to the bathroom. But the kids ate it right up and wanted more. 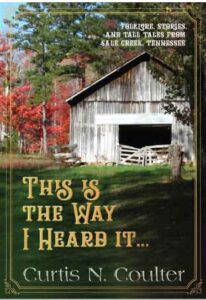 During the late 1800s and early 1900s, many supposedly true stories began to circulate around Sale Creek that there was some funny business going on in the vicinity of the old mill and dam and extending through the hollow – a distance of over two miles. People began encountering sights and sounds in the woods as they walked along the road there at night. Now, if you have never walked up through that area right when darkness falls, you cannot imagine how dark it can get with no outside lights visible and trees hanging over the road. I’m telling you, if someone’s eyes were blindfolded and then covered with a heavy dark hood, it wouldn’t be any darker than Pitty Pat Hollow after dark. It gets dark there, and I mean somethin’ another ferocious dark!

Unsuspecting people would be walking up that hollow, and they would hear pitty-pat, pitty-pat, pitty-pat in the darkened woods. Now, just let me say right here and now that no one wanted to listen to the sound of something pitty pat pitty pattin’ through the woods at night because it was proof positive that the booger was coming to do someone much bodily harm. It sounded like a large creature running behind the person, barely audible except for the faint pitty-pat sound. People would whirl around and look and…nothing…then the pitty-pat sound again, and brother, that was when the rubber met the road. That is when the shout was heard, “Run! Run for your life!” And run everyone did. They took off like a shot. I hate to tell the sportspeople this, but the three-minute mile record was shattered by a minute and a half by those sprinters in Pitty Pat Hollow over one hundred years ago because those sprinters were not running for medals or accolades. Those poor sufferers were running for their very lives. Some of the best runners in the country were the Shipleys, Elseas, and Iles families that lived in that hollow. 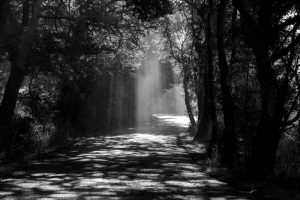 People driving teams of horses along the darkened roads at night often reported that things dropped out of trees onto the backs of their horses, causing them to stampede uncontrollably. Other team drivers reported plodding along slowly in the dark and becoming conscious in their peripheral vision of some type of apparition moving alongside them. When they turned their heads to observe, the thing was gone. Drivers often described the apparition as looking like a young woman in a white dress and veil. Walkers, if not hearing the sound of pitty-pat, pitty-pat, pitty-pat, often became aware of something walking along beside them – wearing that same white dress and veil. They saw it with their peripheral vision, but when they wheeled around to observe the apparition, it was gone!

Even two of the community doctors, Dr. C.E. Downey (1846-1906) and Dr. Vitruvius J. Kennedy (1841-1890), told stories about having something either chase them or, in the case of Dr. Downey, something jumped out of a tree onto the back of his horse while he made his way to visit a patient late one night. In Downey’s case, the horse went to bucking and thrashing around in the middle of the road, finally shook off whatever the devil was on its back, and took off up the hollow with the doctor hanging on for dear life. After he finally reached the safety of his patient’s homes and tended to their need, he told them that he would stay with them for the rest of the night because there was no way that he was going back through the hollow that night.

Stories of things getting on the backs of horses were numerous, but there were many other types of narratives as well. Travelers in the hollow would hear things up in the woods and freeze in their tracks, listening intently. They would take a couple of steps and then stop and listen again. By that time, their senses were heightened to a razor’s edge as they awaited the confirmation of evidence that they were facing a confrontation with the dreaded pitty-pat. Rock throwing usually came into play about that time as the traveler attempted to test the waters, you might say, to determine if there was some mortal person up there fooling around with road travelers or if it was indeed the dreaded apparition of the hollow. 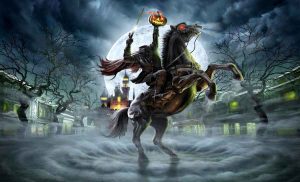 But the common denominator in most of the spooky encounters involved the pitty-pat, pitty-pat, pitty-pat sound; hence, the hollow became known as Pitty Pat Holler. Washington Irving and his Legend of Sleepy Hollow had nothing on the outright terrors encountered in the local spook house known as Pitty Pat Hollow, for not only did we have a local spook just as bad as the headless horseman, but we had one bonafide booger on our hands and even one that was certified headless as well. Stories did circulate about having some type of thing all of a sudden occupy the other half of a wagon seat, and in the driver’s side vision, he could tell that it had no head.

Now, after so many of these tales circulated, it was no longer a matter of whether or not the stories were true or not. There were enough of them around by then that was told for the truth that everyone accepted the actual existence of some kind of booger lurking around in those woods. The sheer volume of encounters and the convincing narratives outweighed the false tales spun in story-telling sessions in darkened rooms at night.

In my 1990 book, A Sentimental Journey Down Country Roads, I interviewed Mrs. Elsie Iles, who told me several Pitty Pat stories and emphasized several truths about the hollow. (1) People did feel uneasy walking the roads at night. There was most definitely a fear that something was lurking around out there. (2) People were mindful of the danger and completed their outside work before total darkness set in. (3) People avoided going through the hollow at night…period! If it meant following the Daugherty Ferry Road to Providence and then Black Oak Ridge, then that’s what they did. What are an extra two miles of travel compared to having an ugly encounter and risking your life facing the dreaded pitty-pat apparition? 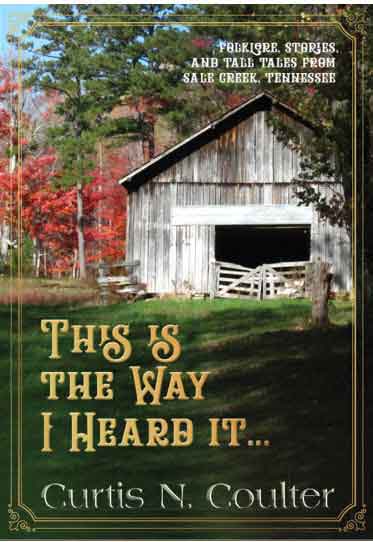 About the Author:  Curtis N. Coulter is the author of This Is The Way I Heard It, Folklore, stories, and tall tales from Sale Creek, Tennessee. Stories include humorous things that happen at church services and baptisms as well as the humor of growing up in pre-modern eras. Also includes tributes to a couple of outstanding citizens as well as the complete and unabridged Pitty Pat Hollow tales and the anthology of the famous Coulterville Osprey couple.