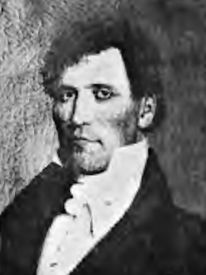 Russel Farnham was a frontiersman, explorer, and fur trader in the American West.

Farnham was born in Massachusetts in 1784 and when he grew up, he joined an expedition organized by John Jacob Astor to establish the Pacific Fur Company. First hired as a clerk, he later began to oversee the trading of the American Fur Company in the Great Lakes region during the 1810s and 1820s. He was arrested as a spy during the War of 1812, but when several of his friends appealed to British authorities, the charges were eventually dropped. He made one of the first trips into the Midwest on behalf of the American Fur Company in 1817, and later formed a partnership with George Davenport, trading with the Sac and Fox in the Missouri River Valley. During this time he took a wife from the Menominee tribe named Agathe Wood and the couple would have a daughter.

In 1826, he moved to St. Louis, Missouri where he married a white woman named Susan Bosseron, and they too would have a child. In 1827, he and a man named Ramsey Crooks absorbed the Columbia Fur Company, and with former Columbia traders such as Kenneth McKenzie, the two founded the American Fur Company’s Upper Missouri Outfit. On October 23, 1832, he contracted cholera while in St. Louis, and died within hours.