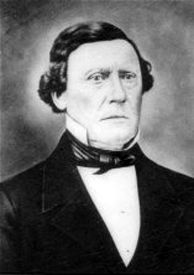 Kenneth McKenzie nicknamed the “King of the Missouri,” was a fur trader for the American Fur Company who controlled a territory larger than most European nations.

McKenzie was born in Bradlack, Scotland, on April 15, 1797, and immigrated to America in 1816. He first worked as a clerk for the North West Company, but after a few years, he quit and moved to St. Louis, Missouri, in 1822. With Joseph Renville, he formed the Columbia Fur Company, of which he was President when it merged with the American Fur Company in 1827. McKenzie was placed in control of the American Fur Company’s interests on the upper Missouri River and formed the Upper Missouri Outfit subdivision with William Laidlaw and Daniel Lamont.

To McKenzie fell the responsible task of carrying the trade into those hostile regions from which the traders had always been driven. He was very ambitious and entered this new field with great enthusiasm and untiring energy. Within four years, he occupied the entire trade area with posts at the mouth of the Yellowstone, Bighorn, and Marias Rivers. He established the noted post of Fort Union in present-day North Dakota — the best-built and equipped post west of the Mississippi River.

By 1833, the American Fur Company controlled the entire Missouri River area, and McKenzie was widely considered the “King of the Missouri.” From his headquarters at Fort Union, McKenzie ruled over an extent of country greater than that of many a notable empire in history. His outposts were hundreds of miles away; his parties of trappers roamed far and wide through the vast mountains. From every direction, tribes of roving Indians came to his post to trade. Altogether, it was a remarkable business that he ran and one that only a man of great ability could have handled so successfully. He was universally feared and respected, while his immediate subordinates in charge of the various posts considered him not merely their superior but a friend. His correspondence with them shows superior diplomatic skills. He could, with equal facility, praise well-doing, administer mild censure to rob it of all bitterness or bear down with merciless weight upon those who deserved it.

He was successful in his work, but stiffer competition allowed his zeal to lead him into a faux pas, ending his usefulness in the upper country. This was the erection of a distillery at Fort Union, which violated U.S. laws. The detection of this fraud brought widespread contempt upon the company, seriously threatened its charter, and forced McKenzie to retire from the country.

He visited Europe and, after his return, went again to Fort Union but did not long remain there. He closed up his affairs with the American Fur Company with about fifty thousand dollars to his credit. He then established himself in the wholesale liquor trade but was unsuccessful, and with his habits of lavish hospitality, he soon spent the greater part of his fortune. He died in St. Louis, Missouri, on April 26, 1861, and is buried in Bellefontaine Cemetery.

McKenzie married late in life and left two children, daughters. He also had a son named Owen McKenzie from an Indian wife. Owen was given a good education and became a man of considerable prominence in the upper Missouri River trade. Malcolm Clarke killed Owen in 1863.