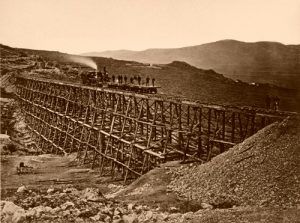 I’m on intimate terms with one of the biggest robbers in this country. He’s an expert at the business, but has now retired from active work. The fact of the matter is, Joe didn’t know he was robbing, at the time he did it, but he got there, just the same, and come mighty nigh doing time in the penitentiary for it, too.

Maybe I’d better commence at the beginning and tell you that I first knew Joe Hogg in ’79, out at the front, on the Santa Fé Trail. Joe hailed from Salt Lake City, and had run on the Utah Central, which gave him the nickname of “Mormon Joe,” a name he never resented being called, and to which he always answered. I never did really know whether he was a Mormon or not, and never cared; he was a good engineer, that’s about all I cared for. Joe took good care of his engine, wore a clean shirt and behaved himself — which was doing more than the average engineer at the front did.

I remember, one night, Jack McCabe — “Whisky Jack,” we used to call him — made some mean remark about the Mormons in general and Joe in particular, and Joe replied: “I don’t propose to defend the Mormon faith; it’s as good as any, to my mind. I don’t propose to judge or misjudge any man by his belief or absence of belief. All that I have got to say is, that the Mormon religion is a practical religion. They don’t give starving women a tract, or tramps jobs on the stone-pile.

The women get bread, and the tramps work for pay. Their faith is based on the Christian Bible, with a book added — guess they have as big a right to add or take away as some of the old kings had — bigamy is upheld by the Bible, but has been dead in Utah, for some years. It can’t live for the young people are against it. In Utah the woman has all the rights a man has, votes, and is a person. (Since cut out of new constitution.) Before the Gentiles came to Salt Lake, the Mormons had but one policeman, no jail, few saloons, no houses of prostitution — now the Gentile Christian has sway, and the town is full of them. I guess you could argue on the quality and quantity of rot-gut whisky a good engineer ought to drink, better than on theology, anyhow.”

I never heard any of the gang twit Joe about the Mormons again.

I didn’t take an awful sight of notice about Joe until I came in, one night, and the boys told me that Joe was arrested as an accomplice in the robbery of the Black Prince mine, in Constitution Gulch.

This Black Prince was a gold placer owned by two middle-aged Englishmen. They had a small stamp-mill, run by mule power; and a large number of sluice-boxes. They always worked alone, and said they were developing the mine. No one had any idea that they were taking out much dust, until the mill and sluice-boxes were burned one night, and the story came out that they had been robbed of more than thirty thousand dollars.

Each partner accused the other of the theft. Both were arrested, and detectives commenced to follow every clue.

Joe’s arrest fell like a thunder-clap among us. The Brotherhood men took it up right away, and I went to see Joe, that very night. It was said that Joe had visited the Black Prince, the day before, and had been seen carrying away a large package, the night before the robbery.

Joe absolutely refused to say a word for or against himself.

“The detectives got this scheme up and know what they are doing,” said he; “I don’t. When they get all through, you’ll know how it’ll come out.”

To all questions as to his guilt or innocence, to every query about the crime or his arrest, he replied alike, to friend or foe:

“Ask the sheriff; he’s doing this.”

He was in jail a long time, but nothing was proven against him and he was finally released.

Neither of the Englishmen could fasten the crime on his partner, and they sold out and drifted away, one going back to England and the other to Mexico.

Joe ran awhile on the road again and then took a job as chief-engineer of a big stamp-mill in Arizona, and going there he was lost to myself and the men on the road, and finally the Black Prince robbery passed into history, and nothing remained but the tradition, a sort of a myth of the mountains, like Captain Kidd’s treasures, the amount only being increased by time. I believe that the last time I heard the story, it was calmly stated that thirty million dollars were taken.

When I was out West, last time, I got off the train at Santa Fé, and when gunning through the baggage for my kiester, I saw a trunk, bearing on its end this legend:

While I was “gopping” at it, as they say down East, and wondering if it could be my Joe Hogg, a very nice-looking lady came in, leading a little girl, glanced along the lines of trunks, put her hand on the one I was looking at, and said:

“That’s the one; yes; the little one. I want it checked to New York.”

Just then, a little fellow with whiskers on his chin and a twinkle in his eye came in and took charge of the trunk, the woman and the child, and with the little one’s arms around his neck, bid them good-by, and got them into their seats in the sleeper.

I watched this individual with a great deal of interest; he looked like my old friend, “Mormon Joe,” only for the whiskers and the stockman clothes.

Finally he jumped off the moving train, waved his hand and stood watching it out of sight, to catch the last glimpse of (to him) precious burden-bearer; he raised his hand to shade his eyes, and as he did so, I saw that it was minus one thumb, and I remembered that “Mormon Joe” left one of his under an engine up in Colorado — I was sure of him.

There was a tear in his eye, as he turned to go away, so I stepped up to him and asked:

“Any new wives wanted down your way, Elder?”

He glanced up, half angry, looked me straight in the eye, and a smile started at the southeast corner of his phiz and ran around to his port ear.

“Well, John, old man, I don’t mind being sealed to one about your size, right now. I’ve just sent away the best one in the wide world. Old man, you’re looking plump; by the Holy Joe Smith, a sight of you is good for sore eyes!”