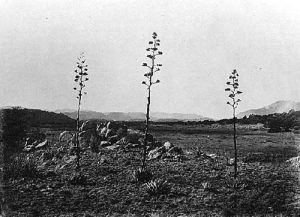 The desire to travel was strong within me, and in the following June, I left Mankato, went out to Arizona and secured a position on the A. & P., at Blue Field, a small town almost in the center of the desert. Alfreda, Kansas, was dreary and desolate enough, but there, I was at least in communication with civilization, because I had one wire running to Kansas City, while Blue Field was the crowning glory of utter desolation. The Bible says that the good Lord made heaven and earth in six days, and rested on the seventh. It needed but a single glance at Blue Field to thoroughly convince me that the Lord quit work at the end of the sixth day right there, and had never taken it up since. There was nothing but some scattering adobe shacks, with the usual complement of saloons, and as far almost as the eye could see in every direction,—sand—hot, glaring, burning sand. To the far northwards, it could be dimly observed the outlines of the Mogollon range of mountains.

The population consisted chiefly of about four hundred dare-devil spirits who had started to wander westwards in search of the El Dorado and had finally settled there, too tired, too disgusted to go any farther, and lacking money enough to return to their homes. It wasn’t the most congenial crowd in the world. There was only one good thing in the place, and that was a deep well of pure sparkling water. The sun during the day was so scorching that the rails seemed to sizzle as they stretched out like two slender, interminable bands of silver over the hot sands, and at night no relief was apparent, and the office so stifling hot that my existence was well-nigh unbearable. But the pay was ninety dollars per month and I hung on until I could save funds enough to get back to God’s own country. To sleep in a house, in the daytime, was almost killing, so I used to make up a sort of bunk on a truck and sleep in the shade of the freight shed. At seven-forty-three in the evening, the Trans-Continental flyer went smashing by at a fifty-five mile an hour clip and the dust it raised was enough to strangle a man.

The Arizona climate is a well known specific for pulmonary troubles, and thousands of people come down there in all stages of consumption from the first premonitory cough to the living emaciated skeleton.

The first station west of me was Clear Creek (so-called on account of a good-sized stream of water that came down from the Mogollons), and a few days after I arrived at Blue Field, I heard a message going over the wires saying that Fred Baird was coming down there to take charge. I had known him up in Kansas, and his looks and a hacking cough indicated only too truly, that the dreaded consumption had fastened itself on him; therefore when I heard of his assignment to Clear Creek, I knew it was his health that brought him down to that awful country. He had a wife (and a sweet little woman she was), and two beautiful children, aged two and four. A few evenings after this I had the pleasure of talking to them for several minutes as they went through on a slow passenger train, and I must say that my heart ached when I thought of the town to which that family was going. What a place to bring a woman? But then women have a faculty of hanging on to their liege lords under all circumstances and conditions. God bless ’em. Baird, himself, looked wretched, being a mere shadow of his former self, but like all consumptives, he imagined he was going to get well.

Just about this time, two Indian gentlemen, named Geronimo and Victorio, were raising particular mischief all through that section of the country, and the feeling that any moment they might come down on you and raise your scalp after puncturing you full of holes was anything but pleasant. It was decidedly creepy and many a time I wished myself back in the good old state of Texas. I had come for excitement and adventure and it was not long until I had both articles doled out to me in large chunks. Those Indians used to break out from their reservations, swoop down on some settlement, kill everything in sight and then loot and burn to their heart’s content. There was no warning—just a few shots, then a shrill war-whoop, and a perfect horde of yelling and shooting red devils would be upon you. Precautions were taken and some of the larger settlements were able to stand them off until some of the small army could come and scatter them. Blue Field had pickets posted every night, chosen from among the four hundred toughs that lived there, and was pretty well protected.

They gave us a wide berth for a while, but one night, I was sitting dozing in my chair about eleven-thirty, when I was awakened by the sharp crack of a rifle, followed in quick succession by others until it was a regular fusillade. Then I heard the short shrill Apache war-whoop, and mentally I thought my time had come. I tried to breathe a prayer, but the high and unusual position of my heart effectually prevented any articulation.

The window had been closed on account of a high wind blowing, or I fancy I should have gone out that way. However, I grabbed up a rifle, and then opening a trap door, dropped down into a little cubbyhole under the floor, where we used to keep our batteries. What I brought the rifle along for I can’t say unless it was to blow the top of my own head off. The place was like a bake-oven and all the air I received came through a small crack in the floor, and it was not long until I was soaked with perspiration.