Tiptonville, New Mexico, located just northwest of Watrous, was once an independent town that serviced numerous travelers and traders along the Santa Fe Trail. The town is extinct today, and what little remains are part of Watrous, New Mexico. 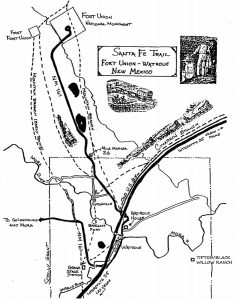 This community had its beginnings in a Mexican land grant known as La Junta de los Rios Mora y Sapello, later known as the John Scolly Grant. This 1846 grant was comprised of 10 square leagues of land situated on the junction of the Mora and Sapello Rivers. Scolly and others actually settled on the grant land in 1843 and built a large diversion dam and ditch from the Sapello River to irrigate their fields.

In 1846 brothers William B. and Enoch Tipton, from Boone County, Missouri, came to New Mexico with General Stephen Kearny’s army. Later, William was hired by Samuel B. Watrous to help him claim and settle his portion of the Scolly Grant. Soon, William and Enoch Tipton settled on the Mora River.

Samuel Watrous established a ranch a couple of miles away in 1849 and soon laid out the town of La Junta (later renamed Watrous.) That same year, William Tipton married Samuel Watrous’s daughter, Mary Manuela, who was only 12 years old. He then became a partner with Watrous in the firm of Watrous and Tipton, which would eventually own 20 freight wagons that hauled merchandise for many years on the Santa Fe Trail, between Missouri and New Mexico. The two would remain business partners until 1864.

In 1862, Enoch Tipton, along with Lemuel B. Searcy, purchased property a couple of miles east of Watrous. The $450 they paid for the property gave them a one-seventh interest in the Scolly Grant. Calling the area Boone Valley, Tipton built the first log and adobe section of his house and a large diversion dam and ditch from the Mora River to irrigate his fields.

Enoch Tipton had earlier married Martha Jane Goslin in Boone County, where both the Tipton and the Goslin families were early settlers. At their new residence, they raised cattle and crops that they sold to nearby Fort Union and travelers on the Santa Fe Trail. 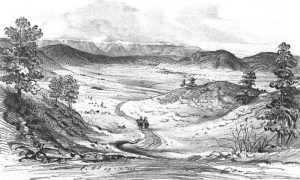 William B. Tipton built a large galleried ranch house on the Mountain Branch north of Barclay’s Fort. He farmed, ranched, and raised beef for sale to Fort Union, founded ten miles north of the Mora River.

In 1869, the young Reverend Thomas Harwood, a pioneer Methodist missionary, arrived in New Mexico, making Tiptonville his home. He soon built a school for the benefit of the few Americans in the vicinity and from his home, ranged widely across the land, traveling on horseback or by buggy as a “circuit preacher.”

In 1870, William Tipton platted the Tiptonville townsite adjacent to his ranch, which became a gathering place for caravans on the Santa Fe Trail. The town was laid out in a grid pattern by surveyor W. R. Shoemaker on the Mora River’s north bank. 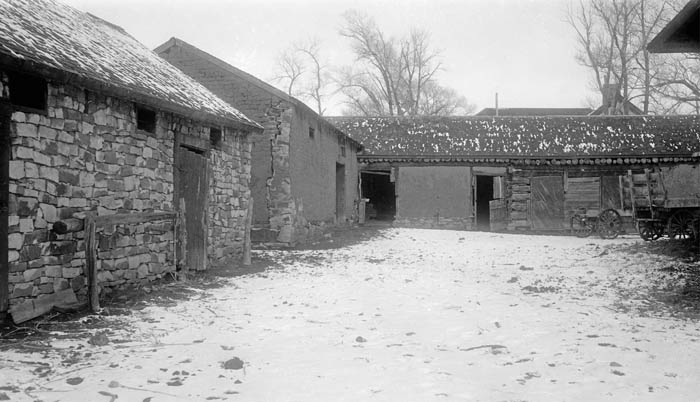 Tipton’s new town grew fairly quickly, soon having several stores, stables, a saloon, a Masonic Lodge, and a Barlow & Sanderson Stage Station. Its post office opened in 1876. The Homes & Wallace Company briefly published the Weekly Pioneer in Tiptonville because they expected the town to expand and eventually engulf nearby Watrous. However, when it was evident that it would be the other way around, they moved the paper to Watrous.

Tiptonville was called home to 128 people at its peak, but with the nearby proximity to Watrous, its glory wouldn’t last. The post office closed in 1908.

Meanwhile, Enoch Tipton purchased Samuel B. Searcy’s undivided one-half of one-seventh interest in the Scolly Grant from Searcy’s widow for $3,500 in 1871. Enoch then claimed property that stretched for 6.5 miles from the east boundary of the grant. Most of the land was used for pasture for cattle and horses.

Today, this old community is gone. Somewhere along the line, William Tipton’s house was destroyed by fire, but several largely unaltered buildings remain, reflecting the adobe brick construction characteristic of the Territorial period. 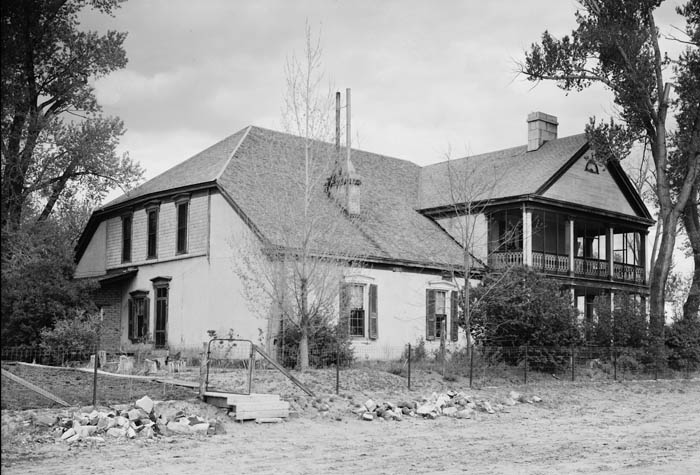 When Enoch Tipton died on March 11, 1878, he left 364.93 acres of irrigable land divided between his wife and children. After Enoch’s death, the farm continued to thrive, and by 1880, it was valued at $15,000. The farm had five acres planted with fruit trees, more fields were planted with peas, beans, wheat, corn, and oats, and livestock was abundant. in 1883, Enoch’s and Mary Jane’s son, Charles Quarles Tipton, built a new house for his mother. Sitting apart from the other buildings and facing the Mora River through a stand of Black Willow trees, the two-story Italianate brick house reflects more sophisticated construction methods made possible by rail connections to the east.

Three-quarters of a mile north of the ranch houses is the Marshall family cemetery site, containing four children of Robert J. and Mary E. Tipton Marshall, a daughter of Enoch and Martha Jane Tipton.

To the south and west, the Tipton irrigation ditch and fence line are historic demarcations left intact due to the relative isolation of the district and the general lack of development in the area. In all, there are eleven contributing resources that comprise the Tipton/Black Willow Ranch Historic District. These resources are highlighted by hundreds of Black Willow trees growing along the roads and the irrigation ditches.

The Tipton/Black Willow Ranch Historic District remained in the hands of the Tipton family from Enoch Tipton’s purchase in 1862 until Elizabeth Duncan Tipton sold the last parcel in 1945. The land is presently owned by the Black Willow Ranch, LLC.

These trail-era buildings are on private property but can be seen from an access road. The old Enoch Tipton Ranch is 2.23 miles southeast of State Road 97.

The actual site of Tiptonville is about two miles northwest of Watrous, near Highway 161. The Tiptonville Cemetery still exists, and Santa Fe Trail ruts cross the South of NM 161. 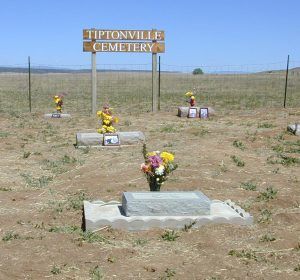