The La Cueva Historic District in Mora County, New Mexico was founded as the La Cueva Ranch in about 1851 by Vicente Romero. 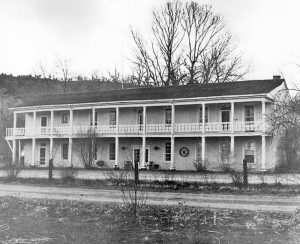 Located in the middle of the Mora Land Grant, Romero was not one of the original grantees but purchased shares totaling 33,000 acres from grantees or their descendants. The name La Cueva, meaning “the cave” is attributed to Romero, who was a sheepherder, who utilized the many caves in the area for shelter when needed.

Romero was an important freighter and sheepman who had grown up in the area herding sheep. Originally from nearby Mora, New Mexico, when Vicente grew up he married Maria Josefa Valdez, the daughter of an original grantee of the Mora Land Grant who owned the largest parcel of land. The couple would eventually have three children — Rafael, Maria Anastana, and Jose Antonio.

After purchasing the property, Romero soon built an 8,000 square foot two-story adobe home for his family and in the 1860s a grist mill, warehouses, a mercantile building, and corrals were added. With his property nestled among three streams, Romero realized the potential of the land and the power of the nearby Mora River. In 1868, a post office was established in the mercantile building. 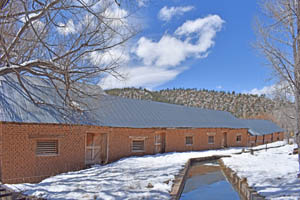 Romero diverted a portion of the Mora River into a network of acequîas (irrigation ditches) that powered the La Cueva Mill. The acequîas also provided irrigation to Romero’s farm which produced large quantities of fruit, vegetables, and grain. For a time, the mill was the primary supplier of flour and wheat to Fort Union in nearby Watrous about 20 miles to the east. The military post was the largest fort in the Southwest and very important in protecting travelers along the trail. During the Civil War, the mill delivered as many as 60 horse and oxen-drawn wagons of milled grain to the fort each day. This was the period when Indian reservations were being established by the United States government and Romero’s mill provided flour to the Indians as well. The ranch also provided needed grain and produce to travelers along the Santa Fe Trail. 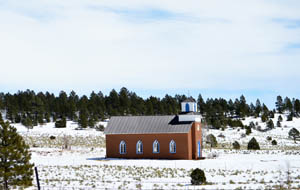 Romero also began to build a church on his property in 1862. When the adobe and wood building was finished in 1870, it was called San Rafael Church, for his oldest son. Priests from nearby Lamy came to help build the church, which became a family chapel for the Romeros and for subsequent property owners. The gothic-style church that shows strong French influence, was last used for mass in 1952, but it has been restored and maintained.

Soon, the small Hispanic village of La Cueva formed around Romero’s ranch and became an important trade center along the Santa Fe Trail. The Romero hacienda served as a social center for the region. The large house had a large stable where travelers could water their horses. Adobe walls in the back provided travelers and settlers protection from Indian raids. A bell used to warn settlers of attacks is still mounted on the west side of the house. 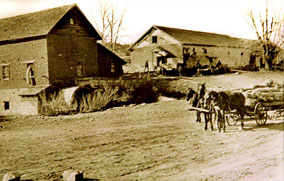 Vicente Romero died on August 30, 1879, and he was buried beneath the altar of the church. Years, later when his wife died, her remains were also interred there.

In 1880, the ranch officially passed to Vicente’s wife, Josepha, and his oldest son, Rafael. In September 1883, Rafael Romero, along with David Deuel, and Charles White incorporated the La Cueva Ranch Company, to manage real estate, construct and operate irrigating ditches, raise, buy and sell livestock; and engage in merchandising, milling and farming.”

Deuel and White later bought out the Romero’s interest in the La Cueva Ranch. In 1908, the rancho was listed as the second-largest in New Mexico Territory. At that time, much of the area was under cultivation and about 4,500 head of cattle were pastured on the rancho during the winter months. 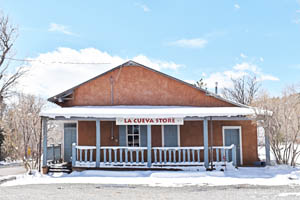 In the next years, the ranch was broken up and sold into several parcels. However, the mill continued to grind wheat and generated electricity until the middle of the 20th century. It was also used to water 3,400 acres using the acequias and lakes

In 1944, Colonel William Salman and his wife Frances purchased a portion of the La Cueva Ranch which he renamed the Salman Ranch. He revitalized the land by producing farm products, particularly raspberries. By 1950 Colonel Salman had reunited the five separate properties to restore the original Romero property. Colonel Salman had two sons, William and David, and a daughter, Frances. David managed the Ranch for 40 years, continuing his father’s legacy of conversation and protecting the land and its resources. When he retired, his younger sister, Frances, took over as Managing Partner. Frances continued to promote and protect the family values and land until it was sold in 2016.

The ranch was then acquired by the cattle-ranching Abell family of Austin, Texas. The Abells who owned adjoining property had been operating in Northeastern New Mexico since 1996. The name was then changed to La Cueva Farm, but the family continues with the same operations, traditions, and community presence that the Salmans had built. Today, La Cueva is a private residence as well as a farm. In the summer months, travelers can pick raspberries. 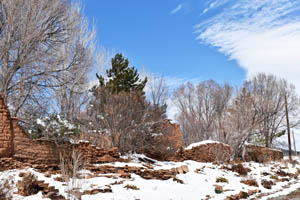 The La Cueva Historic District, encompassing 470 acres, was added to the National Register of Historic Places in 1973. Most of the original ranch buildings continue to stand including the two-story stone and adobe La Cueva Mill, mercantile store, the large two-story hacienda, storage buildings, the San Rafael Church, stables, some acequîas, a farm, and a few outbuildings. Surrounding some of this property are corrals made of adobe and flagstone.

Although much of the mill machinery has been removed from the interior, the water wheel is still in position. Much of Romero’s elaborate irrigation system still serves the valley.

La Cueva is located five miles southeast of Mora, New Mexico at the intersection of NM 442 and NM 518. 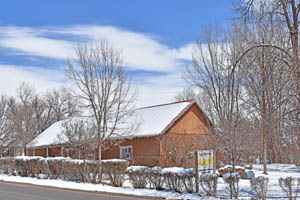