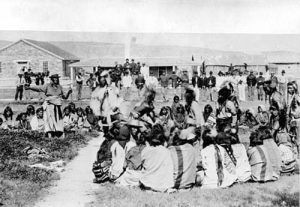 Fort Washakie, Wyoming, first known as Camp Augur, was a sub-post of Fort Bridger. It was established by Lieutenant Patrick Henry Breslin and troops from the 4th U.S. Infantry on June 28, 1869, where Lander now sits. Less than a year later, it was reorganized as a separate post on March 28, 1870, and renamed Camp Brown after Captain Frederick H. Brown, who was killed in the Fetterman Massacre.

The original site was abandoned in 1871 and moved 15 miles northwest of Lander onto the Wind River Indian Reservation. It continued to be called Camp Brown until December 1878, when it was renamed to Fort Washakie in honor of the last chief of the Eastern Shoshone tribe, Chief Washakie. It continued to serve as a military post until 1909. In 1913, it was transferred to the Shoshone. 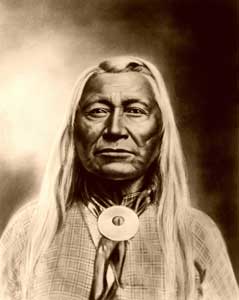 Listed on the National Register of Historic Places, the reservation continues to utilize some of the buildings today. Fort Washakie is also known as the final resting place for Chief Washakie and Sacagawea, the Shoshone woman who guided the Lewis and Clark Expedition. 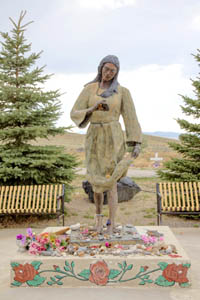 Statue of Sacagawea at the Shoshone Tribal Cemetery at Fort Washakie, Wyoming by Carol Highsmith.