Fording of the Osage River at Warsaw, by General Fremont, October 1861. Frank Leslie’s Illustrated History of the Civil War, 1895.

Violence would continue in the county, as Missouri was enmeshed in the Civil War. Despite the fact that Missouri was actively a slave-holding state, it would not succeed from the Union, creating a great deal of conflict within its own borders. On April 23rd, 1861, a crowd of citizens raised a rebel flag on the east side of the courthouse lawn. However, two months later, the State of Missouri would join the conflict on the side of the Union. 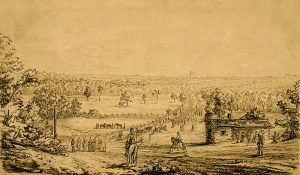 General Fremont’s Army on the march through southwestern Missouri by Harper’s Weekly, 1861.

Quickly, a regiment of Union soldiers called the Benton County Missouri Home Guards was established on June 13, 1861. Made up of a number of Missourians primarily German descent, they would see combat just six days later at the Battle of Cole Camp. The battle resulted in a Confederate victory, with some 34 Union soldiers killed, another 60 wounded, and 25 made prisoners. The Benton County Home Guards officially lasted for only 90 days, after which its members either returned home or joined other regiments.

But, for Warsaw, the worst was yet to come. From October 17-21, 1861, Union General John C. Fremont’s troops, perceiving Warsaw as a “treasonous” city, fairly devastated the town, taking over its supplies and homes for their own needs. The next month, on November 22nd, as Union Army stragglers followed Fremont’s troops, they burned much of what had not already been destroyed.

On February 13, 1862, Major Ed Price, son of Confederate General Sterling Price, was captured. A few months later, in April, there were a number of nearby skirmishes, as well as more fighting in Warsaw that October. Before the war was over, what was left of the town would be burned again on November 7-9, 1863 by Confederate Colonel Shelby’s troops as they march through the town on their way to Cole Camp. 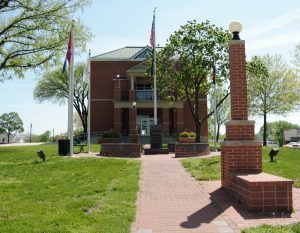 War-torn and bitter, Warsaw residents would survive and rebuild. Navigation and trading on the Osage River returned and merchants once again began to prosper.

In 1874, Warsaw reported a population of about 500, two churches, a hotel, a school, a bank, 15 retail establishments, two newspapers, a flour mill, and a sawmill.

The first train arrived in Warsaw from Sedalia in November 1880, which ceased the need for riverboat traffic on the Osage River. The Homer C. Wright was the last steamer to work on the Osage River. After its years of usefulness were over, it eventually sank during a winter ice storm. 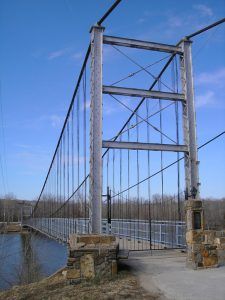 In 1881, the Benton County Courthouse was found to have severe foundation problems and was ordered condemned. Plans for a third and final courthouse were made, but it wouldn’t be until 1886 that it was completed.

That next year, a railroad disaster took place on November 2, 1897, when a narrow-gauge train plunged off its trestle 2 ½ miles northeast of Warsaw, killing engineer, John Minnier.

By the turn of the century, automobiles were quickly replacing horses and buggies, and there was a need for new bridges.

The first suspension bridge in the Lake Area was built in Warsaw in 1895, devised and financed by D.M. Eddy, a Warsaw physician with an interest in bridge design. To offset the financing costs, a toll was charged to cross the bridge. Eddy’s construction foreman was Joe Dice, also of Warsaw. Dice, along with another bridge contractor by the name of Charles Bibb, would build the vast majority of the Ozark River bridges in the early 1900s. Called the Drake Bridge, and later referred to as the “Middle Bridge,” the toll was lifted in 1904 when money was raised to turn it over to the county. 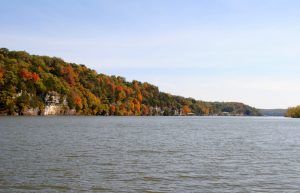 Lake of the Ozarks near Warsaw, Missouri by Kathy Weiser-Alexander.

Over the years, the bridge would suffer a number of tragedies, beginning with a collapse in March 1913, under the weight of a stampeding cattle herd. A replacement suspension bridge was built in 1927 but was condemned due to flooding in 1936. It was repaired and reopened in 1943, only to close once again in 1955, also due to flooding. Condemned once again, the bridge stood silent until 1975 when it was demolished.

Another suspension bridge was built in Warsaw just two years after the first one. Also referred to as the Hackberry Bridge or the Lower Bridge. It, however, was destroyed by fire in 1926 and never rebuilt. 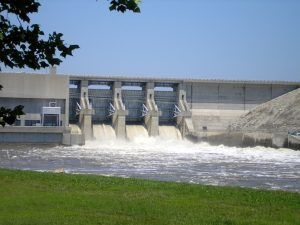 A third bridge was also built in 1904 at a cost of $5,500. When opened, it too was a toll bridge. However, in June 1924, it was destroyed by a tornado. A replacement bridge was then built in 1927 by Joe Dice, the same foreman who had helped construct Warsaw’s first bridge. Referred to as the Upper Bridge, the 600-foot pathway across the river continued to serve automotive traffic until 1979, at which time it was closed to vehicles. Today, renamed “The Joe Dice Swinging Bridge,” it is the last of 15 swinging bridges that once crossed the Osage River. Listed on the National Register of Historic Places, the bridge now serves pedestrians.

In August 1929, construction on the Lake of the Ozarks began, impounding the Osage River, as well as smaller tributaries, including the Niangua River, Grandglaize Creek, and Gravois Creek. Construction of the 2,543-foot long Bagnell Dam was undertaken by the Union Electric Company of St. Louis, Missouri.

Two years later, the dam was completed in April 1931. The lake that formed was at first referred to as Osage Reservoir or Lake Osage, but everyone always called it the Lake of the Ozarks. At the time of construction, it was one of the largest man-made lakes in the world and the largest in the United States. It quickly became a major Missouri tourist destination. Today, it has a surface area of some 55,000 acres, over 1,150 miles of shoreline, and its main channel stretches 92 miles from end to end. Unlike flood-control lakes constructed by the Corps of Engineers, the vast majority of the shoreline is privately owned. 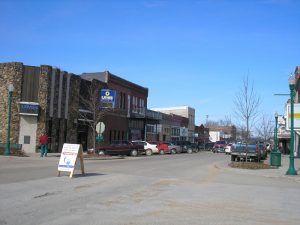 Located at the headwaters of the Lake of the Ozarks, the Warsaw area began to develop resorts and businesses along the shoreline of the channel. Warsaw, as a resort destination, increased when the Harry S. Truman Dam and Reservoir was completed in 1979. Developed by the U.S. Army Corps of Engineers, the lake’s primary mission is flood control, but it also serves power generation, recreation and wildlife management.

Today, cabins and homes dot the roads and lakeshores around Warsaw for miles, and visitors and locals enjoy sitting in the very center of two of Missouri’s largest lakes. Warsaw has become a popular retirement community, as well as a tourist destination, as visitors enjoy water sports, fishing, and camping, and antique shopping in Warsaw’s quaint downtown district. 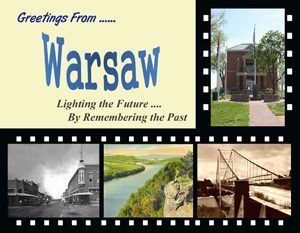 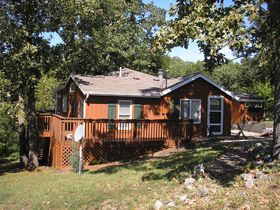 Note: Warsaw, Missouri is Legends of America’s official home and headquarters. Relocated from the Kansas City area in June 2010, we have expanded our part-time cabin into a full-time home and office, by adding a garage and an additional cabin. We love our new home in Warsaw, Missouri.

See views taken from around our home in our “Sitting on the Dock at the Lake” Photo gallery.