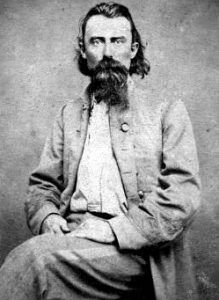 Joseph Orville Shelby, or “Jo” Shelby, as he was often known, was one of the most remarkable cavalry commanders of the Civil War. He was so impressive, that Union General Alfred Pleasonton, who fought against both Shelby and the renowned cavalry commander General JEB Stuart, would later remark, “Shelby was the best cavalry general of the South. Under other conditions, he would have been one of the best in the world”

What makes this praise even more remarkable is the fact that Shelby had no military education when the war began. Rather, he was a natural warrior who, as one biographer put it, “…fought like a man who invented fighting…” One of his greatest feats during the war was what is remembered as Shelby’s Great Raid.

In the fall of 1863, Colonel Jo Shelby left Arkadelphia, Arkansas, on September 22, crossing behind Union lines to begin his raid against the forces then holding his home state of Missouri. Shelby characterized those Union troops as the “…terror to the country, the insulters of unprotected women, and the murderers of old and infirm men.”

Shelby and his men, known popularly as the “Iron Brigade,” moved into Missouri on October 2, and it was just a couple days before they started making some noise…

He made his first strike at Neosho, Missouri, where he knew there was a detachment of Union forces. Shelby ordered his men to spread out and surround the town, and then they quickly dashed in on the attack:

“…the doomed enemy were encompassed by a cordon of steel before they knew of a foeman near. Thorp, with his usual dash, drove their pickets into town, where they, with the main body, took refuge in a strong brick court-house, pierced and loop-holed for musketry, where they kept up a hot fire upon our advancing columns. … I ordered my cannon into position and sent two balls crashing through the walls. This was followed by an immediate demand for unconditional surrender, which… they agreed to.”

After resting at Neosho, Jo Shelby and his men moved on. They passed through the war-ravaged town of Sarcoxie, which Shelby described as being, “…blackened and desolate…” Further on they came upon and took the town of Bowers’ Mill.

Moving on from there, they took the towns of Greenfield and Stockton. Here they “appropriated” food and arms from the Union stores, and destroyed a fort in Stockton.

From Stockton, Shelby headed for the town of Warsaw. He captured 30 Union supply wagons and a number of men on his way. At Warsaw, they met with resistance, but they outnumbered their enemy and defeated them easily. Warsaw proved to be a good capture, but the ease with which the raid had progressed so far was soon to be a thing of the past:

“Vast quantities of all kinds of stores were captured here, with some arms and prisoners, and a strong and well-provisioned fort. Thus far I had traveled ahead of all information, but now the telegraph flashed out its view-halloo, and the railroads groaned under the dire preparations to meet me, and the thunderer of Saint Louis threatened vengeance as dark as death and terrible as the grave.”

Shelby and his men took a more leisurely pace over the next several days, as they moved through the towns of Cole Camp, Florence, Tipton, and Syracuse. Along the way, they captured a good quantity of supplies and arms, burned and destroyed many bridges and railroads, and cut up as many telegraph lines as they could.

Finally, Jo Shelby and his men reached the Missouri River at Boonville. By now, “vengeance” was on its way in the form of a large force of Union troops led by General Egbert Brown. Shelby moved on towards the town of Marshall, but Brown split his force and moved to surround Shelby. 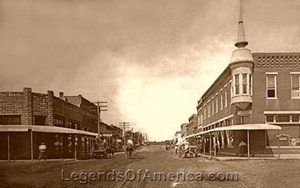 With Brown’s men now at both his front and his rear, Shelby also split his force and made a desperate bid to escape. The now separated Iron Brigade managed to break through the Union lines in two different places, and the two units retreated southward independently.

They were hotly pursued and pressed by their enemy for the duration of their retreat. Finally, on October 26, Jo Shelby and the Iron Brigade made their way back into Arkansas and headed back to safety behind the Confederate lines.

In his final report of the raid, Shelby claimed to have killed, wounded, and captured more than 1,000 Union troops; captured and destroyed ten forts; and captured, used, and destroyed more than $2 million worth of Union supplies, property, and railroads. He was promoted to Brigadier General in recognition of his success, and a saying soon became popular in the Confederate Army of the Trans-Mississippi: “You’ve heard of JEB Stuart’s ride around McClellan? Hell brother, Jo Shelby rode around Missouri!”

General Jo Shelby served with distinction through the rest of the Civil War, but when it came to an end, he and several hundred members of the Iron Brigade were not yet ready to surrender. Instead, they headed to Mexico where they established a “Gringo” colony. Unfortunately for them, the Mexican government was overthrown after just two years.

Shelby then returned to Missouri where he spent many years farming, before serving as a US Marshal for the last four years of his life. Before he became a Marshall, Shelby’s testimony was believed to have played an important role in the acquittal of famous outlaw Frank James.

Jo Shelby was one of the most interesting characters of the Civil War. He was an untrained officer who rose to be regarded as one of the best cavalry commanders of the war, and his legend still lives in modern times. He and the men he took to Mexico are often remembered as “The Undefeated,” with a John Wayne movie of that name supposedly based on Shelby’s story. His impact was remembered for many years, especially by the men who served with him, as is evidenced by the following verse:

Ho Boys! Make a Noise!
The Yankees are afraid!
The river’s up, hell’s to pay—
Shelby’s on a Raid! 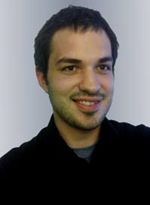 About the Author:  I’m Mark, and I have a website called American Civil War Story. Many people don’t realize how many fascinating Civil War stories they may be missing out on. My goal is to find as many of those great stories as I can, and bring them together in one place for everyone to enjoy. On my site, you will find stories of Heroes, Spies, Battle, and Conspiracy. Don’t miss out!