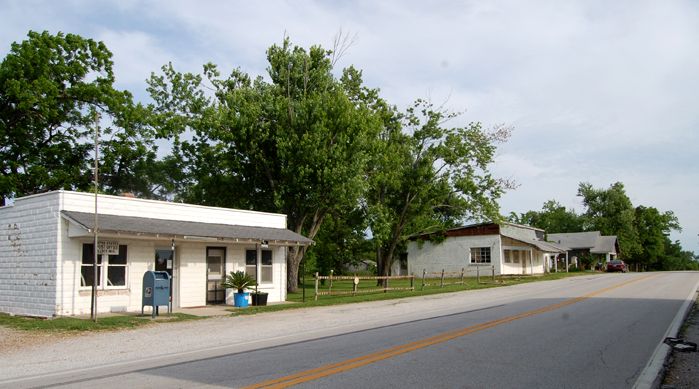 In the old fashion tradition of a Hatfield and McCoy type feud was the “Slicker War” of Benton and Polk Counties in the 1840s. The feud was between Hiram Turk and his three sons against Andy Jones and his four sons. What started as a family affair eventually drew more people into the “war” that would last several years.

Migrating from Tennessee around 1839, Colonel Hiram Turk and his family set up a store and a saloon south of Warsaw around Judy’s Gap (now Quincy, MO) along the Butterfield Trail. Though the family was described as well-educated and courteous, they were also known to never back down from a fight. Also moving to Missouri in the 1830s was the Andy Jones family from Kentucky.  The Jones family settled along the Pomme de Terre River, and before long, their gambling and horse racing habits were well known. They were also suspected of counterfeiting.

The whole affair began on Election Day of 1840, when Turk’s store served as one of the local polling places. When Andy Jones came in, he and one of Hiram’s sons, Jim, got into an argument. The dispute soon escalated into a fight involving Hiram Turk and his other son, Tom, pulling a knife. Though no one was seriously injured in the scuffle, the Turks were charged with assault and starting a riot.

Witnessing the entire skirmish was a neighbor named Abraham Nowell. However, when the Turks were to face a judge, Jim Turk threatened Nowell with a six-shooter if he were to testify against them. When gunplay erupted, Jim Turk lay dead on the ground, and Abraham Nowell soon disappeared from the area.

A relative of Andy Jones, named James Morton, also lived in the area. Morton was an Alabama fugitive, and when a bounty hunter came looking for him, the Turk family was only too happy to help. They soon abducted Morton, delivering him over to the bounty hunter, who returned with the fugitive to Alabama. However, Morton was acquitted and returned to Missouri. In the meantime, Hiram Turk was charged with kidnapping, but the charge was later dropped. 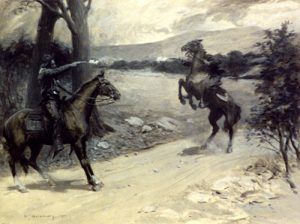 Infuriated, the Jones family and Morton and their friends swore revenge upon the Turks. On July 17, 1841, Andy Jones shot and killed Hiram Turk when returning to his home from the post office. Though Jones was charged with murder, he was later acquitted. With the elder Turk’s death and Jones’ acquittal, the ‘war’ began fully.

Taking vigilante-like action, Turk’s sons publicly announced that they and their allies were going to drive out the seedier elements of the area, including thieves, counterfeiters, and murderers. This included the Joneses. Area residents of Benton and Polk Counties (Hickory County was later formed from southern Benton and northern Polk County) began to ally themselves with the two factions.

The Turk “Posse” was quick to make unwelcome visits to anyone allied with the Joneses, often tying them to trees and whipping them with hickory switches. These beatings were known at the time as “slickings,” hence the “Slicker War.” So bad were these whippings that a couple of the targets later died from their wounds. The Jones faction retaliated with other violent actions. The revenge-driven acts of frontier justice spread across much of the Missouri Ozarks in no time.

In April 1842, Abraham Nowell made the mistake of returning to Benton County. He was quickly arrested for the murder of Jim Turk but was later acquitted. But this was not “ok” with the Turk faction, who shot and killed Nowell in October. The vigilantes then went after Andy Jones, nearly killing an innocent farmer named Samuel Yates. 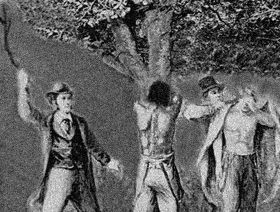 In the meantime, Benton County’s Justice of the Peace, a man named DeWitt Ballou, had made efforts to return the “peace” to the county, with very little success. Commanding a military-like force, he tried to restore law and order, but the Missouri Governor was called in to help when his efforts failed.

Before the reign of terror was over, the Governor was forced to call out the state militia to control the violence in Benton County. In the end, 38 of the Turk men were charged with almost killing the innocent farmer, Samuel Yates, but the case never went to trial.

Later, Tom Turk was killed by one of his own “posse” members. Andy Jones fled to Texas and was followed by Nathan Turk. When Jones was arrested for stealing horses, Nathan testified against him, and Jones was found guilty and hanged.

Sometime later, Nathan Turk would be killed in a Louisiana gunfight. Mrs. Turk, with her one surviving son, returned to Tennessee. The rest of the Jones clan also moved from the area. Though the family feud was finally over, vigilante violence continued for more than a decade.

Interestingly, Benton and Polk Counties weren’t the only areas with a “Slicker War.” From 1843 to 1845, Lincoln County in the eastern portion of the state borrowed the term and had its own vigilante-motivated chaos. When Lincoln County residents also began to suffer the depredations of horse thieves and counterfeiters, they too organized to protect their property.

These vigilantes, however, were more organized. Electing a “captain” and instituting a constitution and by-laws, the group counted some of the most influential men in the county as its members. When area residents were found guilty by the organized group, the offender was either “slicked,” ordered to leave the county or both. If the offender refused to leave or continued with his illegal ways, he was threatened with death. Over the three years of the “war,” several men were killed or wounded, but when the vigilante group felt it had achieved its goal and subdued or driven out the seedier elements of the county, the group disbanded. 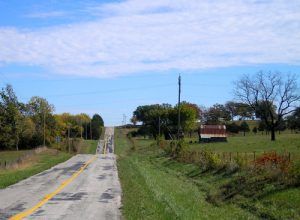 Slicker organizations also operated in St. Charles and McDonald Counties in Missouri and several other areas throughout the state. Though most began with the intention of punishing or ridding themselves of outlaws, in some instances, the “bad men” became members of the societies, maliciously using the groups for their own agendas. This often led to the organization of opposing groups called the “Anti-Slickers.” All across the state, men were killed and wounded in numerous small and large “Slicker Wars.”