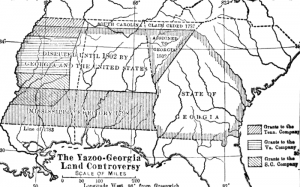 The Yazoo Land Scandal, also known as the Yazoo Land Fraud, was one of the most significant events following the American Revolution in Georgia’s history.

The event occurred after the governor and every member of the Georgia Legislature, except for one man, accepted bribes in 1795 to sell 35 million acres of western land to four companies for $500,000, which amounted to about 1.5¢ per acre. The land, called Yazoo, which is now located in Mississippi and Alabama, was sold at a price far below its potential market value. One of the most corrupt deals in American History, the scandal strained relations with the federal government for a generation.

After the American Revolution, Georgia was too weak and too poor to defend its western land claims. It was called the “Yazoo Lands,” named for the Native American Yazoo tribe that lived along the lower Yazoo River. Because of this, the Georgia Legislature was eager to hear proposals from land speculators who planned to establish settlements. The state tried to establish counties in the western territory twice in the 1780s but was unsuccessful. In 1788, they tried to cede a portion of those lands to Congress, but this was also unsuccessful. 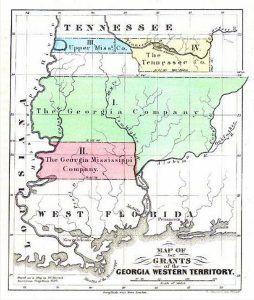 In 1789, Georgia agreed to sell about 20 million acres to three companies who wanted to make money by land speculation. The price was $207,000, or about 1¢ per acre of land located north of the mouth of the Yazoo River and extended eastward from the Mississippi River. However, the sale fell through when Georgia insisted that payment be made in gold and silver rather than depreciated old paper currency.

By 1794, almost all the legislators favored selling the western territory and were feeling pressure to act. That year, four new companies were formed, including the Georgia Company, the Georgia-Mississippi Company, the Upper Mississippi Company, and the new Tennessee Company. These companies included individuals who had tried to make the real estate purchase in 1789 and several leading Georgia politicians such as James Gunn and Justice James Wilson of the United States Supreme Court. To secure the sale of 35 million acres for $500,000, these companies offered shares or bribes to legislators, state officials, newspaper editors, and other influential Georgians. Though Georgia citizens made cries of bribery and corruption, Georgia governor George Mathews signed the Yazoo Act on January 7, 1795, which transferred 35 million acres in present-day Alabama and Mississippi to the four companies.

After the Yazoo Act was passed, angry Georgians protested the sale by circulating petitions and making street demonstrations. When U.S. Senator James Jackson, a Republican from Georgia, learned of the circumstances surrounding the sale of the land, he resigned his seat in Congress. He returned home to run for a seat in the Georgia Legislature in 1795. He also helped other anti-Yazoo candidates to win legislative seats to gain control of the Georgia Legislature. Jackson and several other men took over the seats of the corrupt politicians in 1796, and a new governor was elected — Jared Irwin, who was also appalled by the Yazoo Act. The new politicians manipulated grand jury presentments and newspapers and worked hard to overturn the sale. 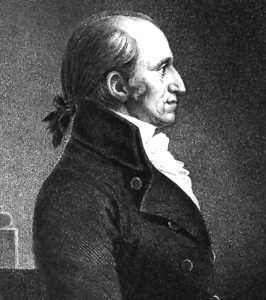 After holding hearings that substantiated the corruption charges, Jackson dictated the terms of the 1796 Rescinding Act, which was signed by Governor Irwin, who made a public statement by burning a copy of the Yazoo Act on the grounds of the capitol. Jackson then arranged the public destruction of records associated with the sale and ensured that state officials tainted by the Yazoo scandal were denied reelection. Only one copy of the original Yazoo Act was kept, and that was sent to President George Washington.

In 1798, Jackson won the election for governor and proceeded to implement the legislation required to follow through with the Rescinding Act by revising the state constitution. In the meantime, the four companies who had purchased the land in 1795 had sold the vast majority of the acreage to both people who wanted it or had already settled the land, as well as land speculators. The state refunded the money to people that had purchased acreage, but many refused to accept it, preferring to keep it. Over the following years, the case would end up in the courts when numerous lawsuits were brought.

Because of the ongoing controversy, Georgia ceded all of its claims to lands west of its modern-day border to the U.S. Government in exchange for $1,250,000 and a release of all legal liability regarding the acreage. The government then established Mississippi Territory, and all Native American titles to reserved lands were extinguished. At this time, the Yazoo Land Fraud became a national issue. 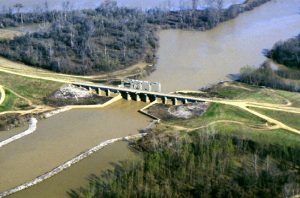 Washington D.C. was soon swarmed with claims and petitions from all over the country, as individuals involved in the companies that bought the land in 1795 often resold the acreage to buyers in other parts of the country who were not aware of the troubles in Georgia that surrounded the whole affair. Unfortunately, representatives from Georgia, including James Jackson, who had rejoined the U.S. Senate in 1801, and other politicians in Congress, firmly opposed any appropriation to settle the claims.

However, the Federal Government formed a commission to look into the Yazoo matter in 1803, which reported that all the lands had passed out of the hands of the original 1795 speculators and that provisions of the deeds declared that purchasers would have no claim against the speculators “by reason of any defect in their title from the State of Georgia,” which made their claims invalid. But, the commission was concerned about the buyers, so they recommended that $5,000,000 be appropriated to settle the claims and end the controversy. However, Congress refused to appropriate the funds.

Unfortunately, the Supreme Court made a similar finding in 1810 that ruled that the Rescinding Act of 1796 had been an unconstitutional violation of the right of contract and that the state could not retroactively invalidate the earlier land sales. It was one of the first Supreme Court decisions that overturned a state law.  Finally, Congress passed an act in 1814 that appropriated $5,000,000 to settle all Yazoo claims, raising the money from selling unclaimed land in the new territory. It would take until 1816 to fully resolve many of the claims filed by third-party owners who had innocently purchased land from the original companies.

The shadow of the scandal continued for decades as Georgia politicians used the “Yazoo” label to beat their opponents. Another legacy of the fraud was the removal of the Indians from the area as the cotton culture spread across the region. Hungry for land, white settlers laid claim to large tracts of land and fueled Georgia’s leaders to push the U.S. Government to complete the process of Indian removal in the 1820s and 1830s, which led to the Indian Removal Act of 1830, and the Cherokee “Trail of Tears” in 1838.