From our 2013 Mississippi Adventure 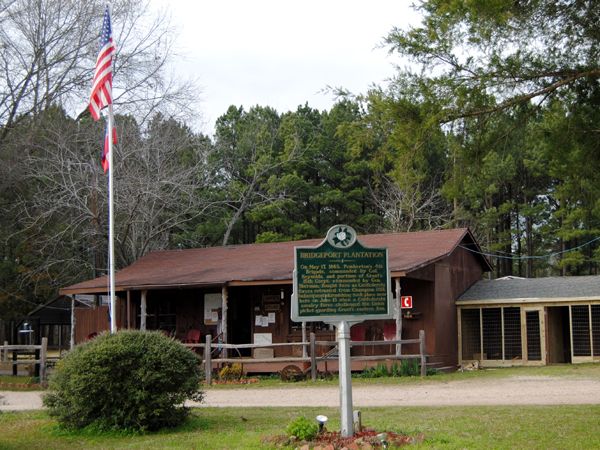 A little known historic gem that was once a southern plantation, involved in a skirmish during the Vicksburg Campaign of the Civil War, and is still held by the same family, intrigued our interest. Always looking for those out-of-the-way places with fascinating history, we accidentally stumbled onto the historic Bridgeport Plantation near Edwards, Mississippi.

Located near the Big Black River the plantation was established by Duklet Askew in 1859. He and his brother traveled from North Carolina to Mississippi searching for land to build a cotton plantation. Duklet bought 2,000 acres northeast of Edwards along the old Bridgeport Road. He began by clearing more than 500 acres, farmed cotton, and built and operated a ferry across the Big Black River. Sometime later, he built a cotton gin and operated a general store close to the ferry.

Life on Bridgeport Plantation was interrupted on May 17, 1863, when Confederates were fleeing after the Battle of Champion Hill back towards Vicksburg. Portions of Lieutenant General John C. Pemberton’s 4th Brigade, commanded by Colonel Alex W. Reynolds, were being pursued by soldiers of General Ulysses S. Grant’s 15th Corps, commanded by General William T. Sherman, when skirmishing broke out at the plantation. The Confederates continued to flee using Askew’s Ferry to cross the Big Black River. 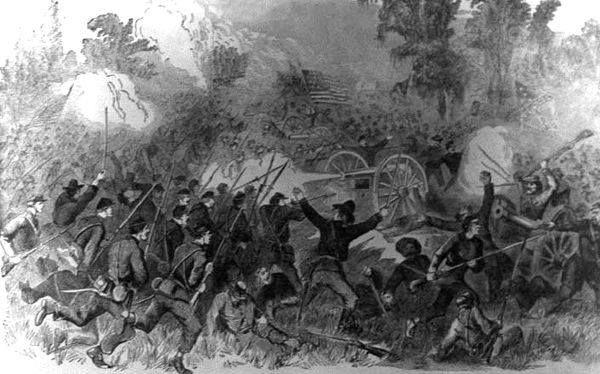 The Battle of Champion Hill near Bolton, Mississippi

Afterward, the Rebels destroyed the ferry so that the pursuing Union troops couldn’t also use it to cross the river. Nearly a month later, during the Operations in Northeast Mississippi (June 13-22, 1863), another skirmish took place at the plantation when a Confederate cavalry force unsuccessfully challenged the Union picket guarding General Grant’s eastern line.

After having been destroyed in the 1863 skirmishing, the Askews rebuilt the ferry across the Big Black River, and the family continued to operate it until a bridge was built in 1904. Called the Askew Bridge, it was located near the Bridgeport Plantation, connecting Askew Ferry Road on the east, to Freetown Road on the west. (These roads were once part of the old Bridgeport Road.)

The first bridge to connect Hinds and Warren Counties for vehicle traffic, it was built by the Virginia Bridge Company of Roanoke, Virginia. The one-lane bridge, spanning 380 feet across the river, was built at a time that area cotton planters were still hoping for a return of the steamboat days. Therefore, its middle span was made high enough to allow the passage of boats. However, the big boats would never return to the Big Black River.

By the early 1970s, its one-lane surface was lined with patches over patches, its old iron trusses were rusted and corroded, and some rods were completely missing, leaving little left to weld together. It was closed forever in 1973, its access blocked by gates, and its surface removed to keep people from walking across what had become a dangerous crossing. Since that time, its iron skeleton has totally collapsed. However, memories of the old bridge still remind the locals of its once important presence, when iron remnants can still be glimpsed during low water. 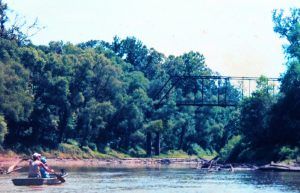 Vintage view of the Askew Bridge and Big Black River

Over the years, Bridgeport Plantation was reduced in size when acreage was divided among heirs, sold, and some lost during the Depression. However, 300 acres still remain in the Askew family. The old plantation home, the Askew Bridge, and the old Cotton Gin are long gone, though its old foundations can still be seen. However, there are two original plantation buildings that continue to stand on Askew property. In addition, just down Askew Ferry Road where it dead-ends today, are two extant grain silos that were once utilized to store grain for cattle that ran on the Bridgeport plantation.

Fourth generation, Sidney Knox Askew, Jr. and, his brother, Thomas, grew up in the original plantation house; but, by the early 1950s, the Askews had moved off the old plantation. Thomas made his way to Greenwood, Mississippi, while Sidney moved to nearby Edwards. Sidney Knox Askew, known to the locals as “Knocky”, married Roma Hubbard Askew and raised his family in Edwards. After his military service, he became a self-employed cattleman and merchant. For years, he ran a grocery store in Edwards, while at the same time, grazing cattle on what was once the Askew Plantation. Later, some of the original plantation buildings, as well as the land itself, was rented and, over time, all but two buildings deteriorated and were lost. However, during this time, Askew bartered with a tenant farmer who was working on his land, to build the earthwork dam that sits on the property today. Situated in a shallow hollow, a small pond had existed for decades; but, Knocky wanted a lake. The dam enlarged the existing pond into what is now Askew Lake – a 15-acre paradise for avid anglers. 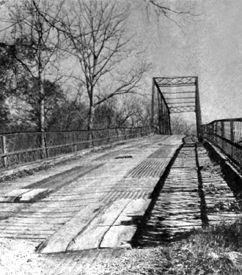 In the late 1970s, Sidney sold the grocery store that he had run for years and put his children to work in, checking out customers, stocking goods, and making deliveries. Unfortunately, there is no trace of the old mercantile in Edwards today, other than a foundation on a vacant lot. Afterward, Knox and Roma, who had a life-long love of camping, pursued their passion, becoming involved with members of the local Good Sam camping club in Vicksburg. With the Bridgeport Plantation and its inviting lake nearby, they soon invited other members to the old Bridgeport Plantation to enjoy the nature and the lake. In 1983, the members, including a plumber and electrician began to make improvements to the camping sites. As more and more people showed an interest, this soon developed into the idea of opening a campground.

In 1994, Sidney’s son, Dan, returned to his hometown after having attended college and worked in government for several years. He soon purchased the property and began to further develop it into the site that it is today. Called Askew’s Landing, it now includes a full-service RV park featuring all the modern conveniences such as over 50 full and partial hook-up sites, two modern bathhouses, a laundry, swimming pool, large covered pavilion, on-site management, and Wi-Fi access.

This hidden jewel is advertised as “Mississippi’s Best Kept Secret”, and they aren’t kidding. The property is listed on the National Register of Historic Places with the RV Park sitting in the center of 300 wooded acres. Located two miles north of I-20, it is easy to access; but, yet, far enough away to shield its visitors from the sounds of nearby traffic or passers-through. 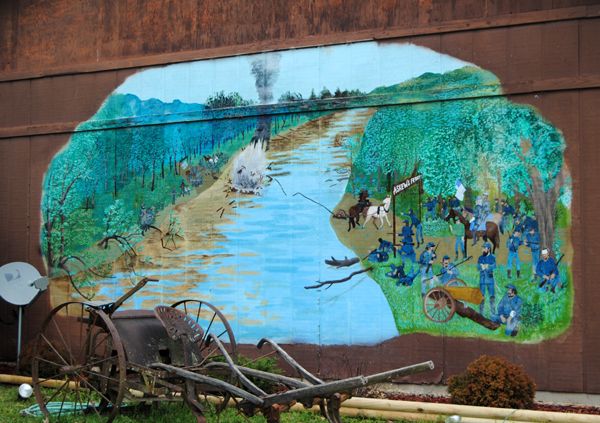 At the entrance to the property sits an old barn, which is original to the plantation and once served as a seed house to the steam-operated cotton gin. Though the cotton gin is gone, the old piers which it once stood upon, can still be seen near the barn. Further in, the campground office/store is located in a historic building that once served as the plantation commissary. The side of the Pavilion features a large mural depicting the skirmish that took place at the Askew Ferry on May 17, 1863, during the Civil War. The mural was painted by a Wisconsin woman who was a guest at the campground some 15 years ago.

The 15-acre fishing lake is stocked with bream and catfish, and surrounded by ducks, geese, and an occasional turkey. On the grounds are two miles of nature trails, some of which are portions of the old Bridgeport Road, built in 1829. One of the nature trails meanders to the bank of the Civil War skirmish took place, the ferry was burned, and the old Askew Bridge once stood.

Surrounded by nature, bird watchers and wildlife photographers are sure to enjoy the variety of species that are abundant on the property. In addition to this beautiful, spacious, and quiet natural environment, you are sure to be met with a dose of friendly, old-fashioned Southern hospitality. 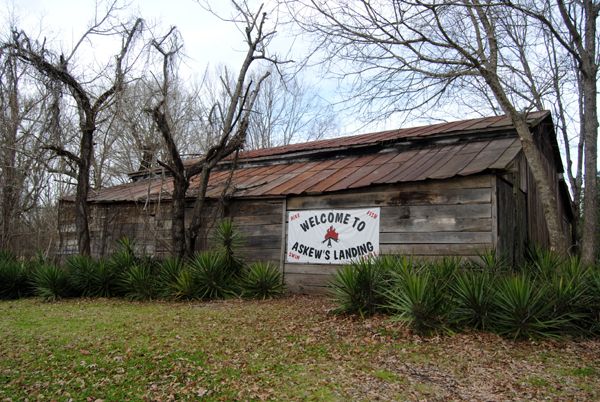 Original barn at the Bridgeport Plantation near Edwards, Mississippi

For RV travelers who may be exploring Civil War sites in west-central Mississippi, this is a great place to rest your head, drop the RV, and venture into Vicksburg, just 15 miles west; Raymond, 17 miles to the southeast; and, Jackson, some 30 miles to the east. Also, in the immediate area, two other not so well known Civil War battles at Champion Hill and the Big Black River Bridge Bridge. Shopping, dining, and more recreational opportunities are available in nearby Vicksburg, and the beautiful and ever-popular Natchez Trace Parkway can be accessed just 18 miles east of Askew’s Landing.

Legends’ Travel Blog for this Area