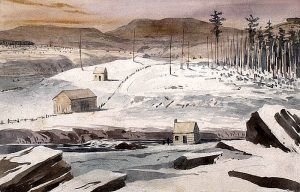 Boundary between Canada and Maine

Fort Kent, Maine was built during the bloodless Aroostook War of 1838-1839 that was a border dispute between Great Britain and the United States. This confrontation, sometimes called the Pork and Beans War, occurred when the military and civilians disagreed on the location of the international boundary between New Brunswick, Canada and the U.S. state of Maine along the upper Saint John River.

No sooner had the 1783 Treaty of Paris been signed following the American Revolution, than the border dispute began. Following the Jay Treaty of 1797, much of the eastern border had been fixed, but the upper area remained disputed. Citizens on both sides of the border began to develop the area to solidify their claims, but this only raised the tension on both sides. By the 1820s, authorities from each government were acting against the other’s settlers and agents.

As the reoccurring dispute dragged on, it appeared that war was on the horizon and a series of forts were built along the southern banks of the Saint John River. A blockhouse was established at the present-day town of Fort Kent in 1838 by a Maine Civil Posse under the command of Captain Nye and later Captain Stover Rines. It was located at the confluence of the St. John River and the Fish Rivers. The two-story blockhouse measured 23.5 feet square with a second story with a 15-inch overhang on each side. The walls were built from cedar timbers, some 19 inches square placed on a shale rock foundation. A powder magazine was built into the base of the structure. 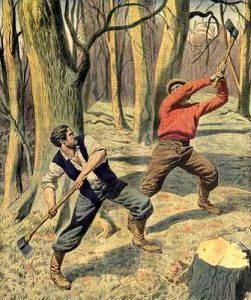 Civilians fighting during the Aroostook War

In 1839 the arrest of a US government agent in New Brunswick prompted Congress to authorize 50,000 federal troops for assignment to northern Maine. Soon, the civil posse garrison was replaced by U.S. troops under the command of Captain John Winder. The blockhouse was enlarged to include barracks, officers’ quarters, and other buildings and named for Maine Governor Edward Kent.

At some point, General Winfield Scott was sent to the area with the power to negotiate a settlement. Scott and New Brunswick Lieutenant Governor John Harvey, who had a long-established friendship, were able to successfully reduce tensions until the Webster-Ashburton Treaty was negotiated in 1842. Now, that the crisis had passed, US troops were removed in 1843 and the post was deactivated. It was officially abandoned in September 1845. The fort never saw any military action.

In 1857 it became the property of the State of Maine for the purpose of establishing a park. However, this didn’t occur, and it was sold to a private individual in 1858. The property was returned to the state in 1891 but was neglected until 1959 when preservation efforts began. During the intervening years, all structures with the exception of the blockhouse deteriorated or were removed. The fort was added to the National Register of Historic Places in 1969 and declared a National Historic Landmark in 1973.

Today, the Fort Kent State Historic Site is a Maine state park in the town of Fort Kent, Maine. The blockhouse is the only surviving American fortification built during border tensions of the Aroostook War.

The original log blockhouse is open to visitors in the summer. Today, the building serves as a museum maintained by the Fort Kent Historical Society. Admission is free but donations are accepted. 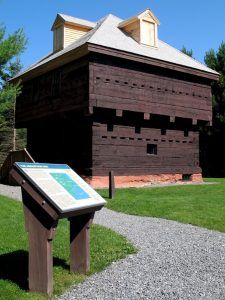