Called the “Crown Jewel of the North Atlantic Coast,” Acadia National Park protects the natural beauty of the highest rocky headlands along the Atlantic coastline, an abundance of habitats, and a rich cultural heritage. At 3.5 million visits annually, it’s one of the top 10 most-visited national parks in the United States. Visitors enjoy 27 miles of historic motor roads, 158 miles of hiking trails, and 45 miles of carriage roads.

The striking scenery and diverse resources of Mount Desert Island have attracted people for thousands of years. The first inhabitants, Native Americans here more than 5,000 years ago, were followed by the French and English. By the 1800s, settlers arrived in large numbers and engaged in fishing, shipbuilding, farming, and lumbering. The island became known to the world in the late 1800s when artists depicted its beauty in paintings.

Deep shell heaps indicate that Native Americans were camping in Acadia, dating back 5,000 years in Acadia. The first written descriptions of Maine coast Indians were recorded 100 years after European trade contacts began describing Native Americans who lived off the land by hunting, fishing, collecting shellfish, and gathering plants and berries.

The Wabanaki people knew Mount Desert Island as Pemetic, “the sloping land.” They built bark-covered conical shelters and traveled in birchbark canoes. Historical records indicate that the Wabanaki wintered in interior forests and spent summers near the coast. Archeological evidence suggests the opposite pattern: to avoid harsh inland winters and take advantage of salmon runs upstream, Native Americans wintered on the coast and summered inland. There may have been two separate groups, one inland and another on the coast. 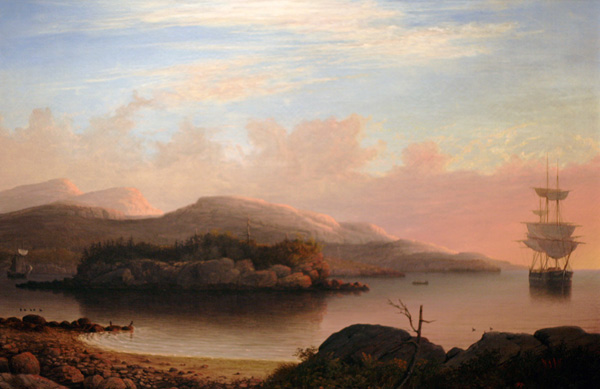 The first meeting between the people of Pemetic and the Europeans is unknown. Still, a Frenchman, Samuel de Champlain, made the first significant contribution to the historical record of Mount Desert Island. He led the expedition that landed on Mount Desert on September 5, 1604, and wrote in his journal, “The mountain summits are all bare and rocky… I name it Isles des Monts Déserts.” Champlain’s visit to the island 16 years before the Pilgrims landed at Plymouth Rock in Massachusetts destined this land to become known as New France before it became New England.

In 1613, French Jesuits, welcomed by the native people, established the first French mission in America on Mount Desert Island. They had just begun building a fort, planting corn, and baptizing the natives when an English ship commanded by Captain Samuel Argall destroyed their mission. The English victory doomed Jesuit ambitions on Mount Desert Island, leaving the land in a state of limbo between the French, firmly entrenched to the north, and the British, whose settlements in Massachusetts and southward were becoming increasingly numerous. Because of this conflict, no one wished to settle in this contested territory. For the next 150 years, the island’s importance was primarily its use as a landmark for seamen. 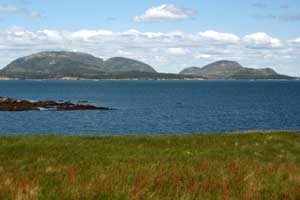 There was a brief period when it seemed Mount Desert would again become a center of French activity. In 1688, Antoine Laumet, an ambitious young man who had immigrated to New France and bestowed upon himself the title Sieur de la Mothe Cadillac, asked for and received 100,000 acres of land along the Maine coast, including all of Mount Desert Island. However, Cadillac’s hopes of establishing a feudal estate in the New World were short-lived. Although he and his bride resided here for a time, they soon abandoned their enterprise, and Cadillac later gained lasting recognition as the founder of Detroit, Michigan.

In 1759, after a century and a half of conflict, British troops triumphed in Quebec, Canada, ending French dominion in Acadia. With Native Americans scattered and the French royalty banished, lands along the Maine coast were opened for an English settlement. Governor Francis Bernard of Massachusetts obtained a royal land grant on Mount Desert Island, and in 1760, he attempted to secure his claim by offering free land to settlers. Abraham Somes and James Richardson accepted the offer and settled their families at Somesville. 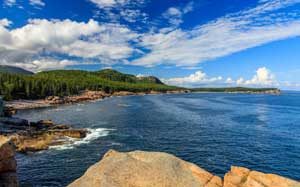 The onset of the American Revolution ended Bernard’s plans for Mount Desert Island. Bernard lost his claim in the aftermath of the war, and the newly created United States of America granted the western half of Mount Desert Island to John Bernard, son of the governor, and the eastern half of the island to Marie Therese de Gregoire, granddaughter of Cadillac. Bernard and de Gregoire soon sold their landholdings to nonresident landlords. Still, their real estate transactions probably made very little difference to the increasing number of settlers homesteading on Mount Desert Island.

By 1820, farming and lumbering vied with fishing and shipbuilding as the significant occupations. Settlers converted hundreds of acres of trees into wood products ranging from schooners and barns to baby cribs and hand tools. Farmers harvested wheat, rye, corn, and potatoes. By 1850, the familiar sights of fishermen and sailors, fish racks, and shipyards revealed a way of life linked to the sea.

The outsiders — artists and journalists — revealed and popularized this island to the world in the mid-1800s. Painters of the Hudson River School, including Thomas Cole and Frederic Church, glorified Mount Desert Island with brushstrokes, inspiring patrons and friends to flock there. These were the “rusticators.” Undaunted by crude accommodations and simple food, they sought local fishermen and farmers to put them up for a modest fee. Summer after summer, the rusticators returned to renew friendships with local islanders and, most of all, to savor the fresh salt air, beautiful scenery, and relaxed pace. Soon the villagers’ cottages and fishermen’s huts filled to overflowing, and by 1880, 30 hotels competed for vacationers’ dollars. Tourism would soon become the primary industry.

During these times, the Wabanaki people came to sell their handmade ash and birchbark baskets to travelers and to harvest precious basket-making resources like sweetgrass. Elaborate Wabanaki dance performances at venues such as Sieur de Monts and the town of Bar Harbor entertained summer tourists and summer residents alike. Led by Wabanaki guides, canoe trips around Frenchman Bay and the Cranberry Islands were a convenient and pleasurable way for visitors to reach the outer islands. 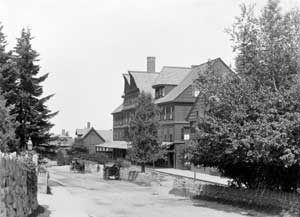 The Malvern Hotel on Desert Island in Maine, by the Detroit Publishing Company, 1901. This was just one of several buildings that would be destroyed in the devastating fire of 1947.

For a select handful of Americans, the 1880s and the “Gay Nineties” meant affluence on a scale without precedent. Mount Desert, still remote from the cities of the east, became a retreat for prominent people of the times. The Rockefellers, Morgans, Fords, Vanderbilts, Carnegies, and Astors spent their summers here. Not content with the simple lodgings available, these families transformed the landscape of Mount Desert Island with elegant estates, euphemistically called “cottages.” Luxury, refinement, and large gatherings replaced the earlier era’s buckboard rides, picnics, and day-long hikes.

Though many new residents and visitors came to the island for social and recreational activities, the affluent of the turn of the century had much to do with preserving the landscape we know today. George B. Dorr, a tireless spokesman for conservation, came from this social strata. He devoted 43 years of his life, energy, and family fortune to preserving the Acadian landscape. In 1901, disturbed by the growing development of the Bar Harbor area and the dangers he foresaw in the newly invented gasoline-powered portable sawmill, Dorr and others established the Hancock County Trustees of Public Reservations. The corporation, whose sole purpose was to preserve land for the perpetual use of the public, acquired 6,000 acres by 1913. Dorr offered the land to the federal government, and in 1916 President Woodrow Wilson announced the creation of the Sieur de Monts National Monument. Dorr continued to acquire property and renewed his efforts to obtain full national park status for his beloved preserve. In 1919, President Wilson signed the act establishing Lafayette National Park. Dorr, whose labors constituted “the greatest of one-man shows in the history of land conservation,” became the first park superintendent. In 1929, the name was changed to Acadia National Park. 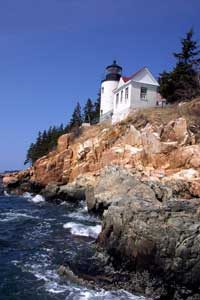 For more than 40 years, the wealthy held sway on Mount Desert, but the Great Depression and World War II ended such extravagance. The final blow came in 1947 when a fire of monumental proportions consumed many of the great estates.

Through the summer and into the fall of that year, Maine received only 50% of its average rainfall, and vegetation became bone dry. After a beautiful Indian summer, the normal autumn rains never came, and by mid-October, Mount Desert Island was experiencing the driest conditions ever recorded. On Friday, October 17, 1947, a fire erupted west of Hulls Cove and burned about 169 acres. On October 21, strong winds fanned the flames, and the blaze spread rapidly and raged out of control, engulfing over 2,000 acres. On the morning of October 23, the wind shifted, sending the inferno directly toward Bar Harbor. The fire swept down Millionaires’ Row, an impressive collection of majestic summer cottages on the shore of Frenchman Bay. Sixty-seven of these seasonal estates were destroyed. The fire skirted the business district but razed 170 permanent homes and five large historic hotels surrounding downtown Bar Harbor.

Though personnel from the Army Air Corps, Navy, Coast Guard, National Park Service, University of Maine forestry program, and Bangor Theological Seminary joined local firefighting crews fought the fire diligently, it wasn’t declared under control until October 27. Some 17,188 acres burned, more than 10,000 of which were in Acadia National Park. Property damage exceeded $23 million. The fall of 1947 was dry throughout Maine, and many severe fires occurred. State-wide, more than 200,000 acres, 851 permanent homes, and 397 seasonal cottages were destroyed in “the year Maine burned.”

The fire changed the town of Bar Harbor. Most permanent residents rebuilt their homes, but many grand summer cottages were not replaced. Many of the seasonal families never returned. Afterward, the estates on Millionaires’ Row were replaced by motels to house the ever-increasing tourist population. 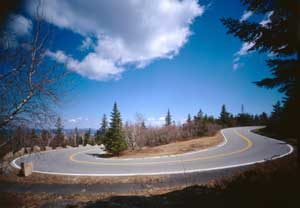 Today Acadia National Park protects and preserves approximately 50,000 acres in Hancock and Knox Counties along the mid-section of the Maine coast. The park consists of portions of Mount Desert Island plus a portion of Isle au Haut to the southwest of Mount Desert Island, the tip of the Schoodic Peninsula on the mainland to the east, and most or portions of 16 smaller outlying islands. The park also preserves more than 13,000 acres in conservation easements across its legislated boundary, which runs from the Penobscot River ship channel to just east of the Schoodic Peninsula.

Other historic resources protected within the boundary of Acadia include 33 miles of scenic motor roads, 120 miles of hiking trails, 45 miles of carriage roads, a hiking trail system noted for its community origins, and a high level of craftsmanship, four lighthouses, and the Islesford Historical Museum. Popular destinations include Cadillac Mountain, Sand Beach, and Jordan Pond. Resource-based recreational activities include viewing the scenery, hiking, bicycling, camping, horseback and carriage riding, sea kayaking, and canoeing. 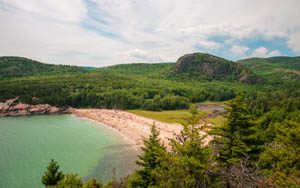