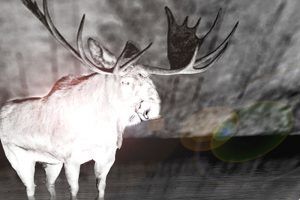 A depiction of a Specter Moose in Maine

“The enormous moose that has been the wonder of the sportsmen in northern Maine since 1891 has again been seen ….. Every story that comes from the north woods concerning this moose makes him a little bigger than before. It is generally believed that no moose ever killed in Maine, or, so far as is known, anywhere else, has approached in stature or weight, much less in spread of antlers, this specter moose of Lobster Lake.”

In 1891, an extremely large white moose was first seen in Maine by Clarence Duffy of Oldtown, a hunting guide who was working around Lobster Lake. Though he did not get near enough to the animal to take a shot, he could see him plainly. Horrified by the encounter, when Duffy told his story, he was laughed at. However, a few months later, a Bangor lumberman named John Ross, who was also at Lobster Lake, also saw the big moose. With this second sighting, some people began to believe. 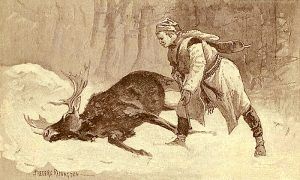 That same year, a New York hunter saw the big moose near Sourdnahunlt Lake and fired several slugs into the animal without the least apparent effect, except for making it angry. The moose then charged the man who took refuge in a bear cave, where he remained for about an hour before the large animal sauntered away.

However, these tales were still mostly discounted until a New York City sportsman, Howard Van Ness, saw the big moose and shot him several times in 1892. This event occurred about 30 miles northeast of Norcross, when Van Ness and three other New York men were hunting. Van Ness was separated from his companions when he shot the moose, which he described as “weighed a ton, and as tall as a camel, with magnificent head and antler.” After his shot hit the animal just above the shoulder, the moose let out a deep bellow and a grunt before coming after Van Ness, who took shelter beneath a tangled mass of fallen trees and branches. The moose then circled the area at tremendous speed and once jumped over his hiding place before finally giving up.

Afterward, many hunters began to look for the great white moose, but it wasn’t seen again until 1895. At that time, a Bangor taxidermist named Granville Gray spied the moose at a distance. A few years later, in 1899, Gilman Brown of West Newbury, Massachusetts, got close enough to the moose on the Roach River to count 22 points on one side of his antlers. Usually, moose antlers rarely have more than 8 to 12 points on a side. Brown also fired five shots at the large animal, which simply glowered at him and stalked majestically away. 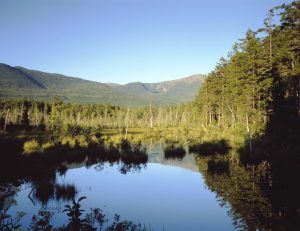 The Specter Moose, called such because of its white or light gray coloring, is said to stand 10 to 15 feet tall, weighs nearly 2,500 pounds, and has an immense set of formidable antlers that stretch from 10 to 12 feet across. In comparison, an average male moose in Maine at the time weighed about 800-900 pounds, stood around six feet tall, and had an antler span of around four to six feet.

The story gained national attention when it was described in a New York Times article in November 1899. More sightings followed in the coming years, with one reported in 1901 when a hunter from Boston, Massachusetts, spotted the beast near Chairback Mountain in the Katahdin region.

In 1906, George Kneeland, of Sherman, Maine, came close to the moose when he was bicycling on the road between Sherman and Macwahoc. At first, he thought it was a horse, but when he stopped to take a closer look, he was surprised to determine that rather, it was a very large white moose. Suddenly the immense beast charged at him, and Kneeland was forced to climb a tree to safety. After investigating the bicycle, the moose vanished into the forest.

In addition to its massive size, many reports also described the moose as glowing faintly, having the ability to simply disappear, and walking through solid objects. Hunters often said they were never able to get near enough to get a shot, and on the few occasions that they did, the animal was unhurt.

In the following years, the moose would appear in waves of sightings, one of which occurred in 1917, only to disappear for years before it would be seen again. 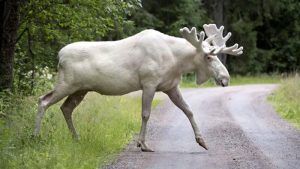 Though albino moose are extremely rare, they do exist and skeptics often attribute these sightings to albinism. In fact, there is an area of Ontario, Canada, that is called the White Moose Forest due to the uncommon number of sightings of white moose, which the locals call “Spirit Moose.”

However, albino moose have eyes that are of a pink hue, and the Specter Moose has brown eyes. Further, the size of these moose is an anomaly in and of itself.

Moose can also suffer from a condition caused by an infestation of winter ticks that causes the lightening of an animal’s coat. However, this condition also causes the Moose to rub off most of its hair, and their bodies are described as skinny and emaciated, which does not fit the description of this giant beast.

Regardless of the skeptics, the locals take this beast quite seriously. 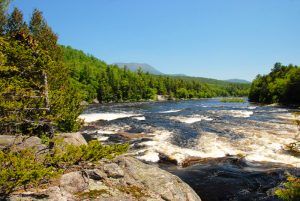 Another rash of sightings occurred in 1932 and then again in 1938. In the latter year, most of the Specter Moose were seen in the forests of the Chesuncook region along the west branch of the Penobscot River. One vivid report came from a hunter by the name of Houston who got a very good look at the beast when he came along a herd of about 16 moose with three males watching over the grazing females grazing in a group with three males watching over them. Two of the males were large healthy moose, but the third was of great size, making the others “look like pygmies” and was of a white luminous coloration. When Houston turned his back for a moment and then turned back around, the large white moose was gone, seemingly having vanished without a trace.

Other stories are even more bizarre. One tells of a group of hunters near the Molunkus Stream in east-central Maine that killed a large white moose. Afterward, they slit its throat and hung it from a tree overnight so they could skin and dress it the next day. However, when they awoke the next morning, the white moose was gone. That night, the dead and vanished moose simply walked into their camp with its throat still cut. The hunters shot at it again but the moose was unfazed and walked away. It was later seen near Ashland, some 90 miles to the north, at which time it was shot again with no effect.

Some tales say that the moose makes an appearance when something bad is about to happen. This allegedly occurred in Franklin, shortly before the town’s restaurant burned down in 2002. 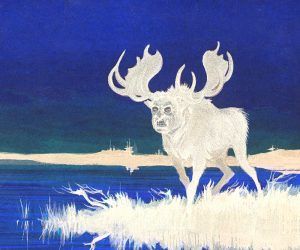 A depiction of the Specter Moose of Maine

Questions about this large creature remain today as to whether it is simply a very large breed of moose with a rare and anomalous color pattern or if it is a mystical ghostly animal that has roamed this region for over a century.

In either case, the creature remains a local legend that has accumulated volumes of local lore over the years.