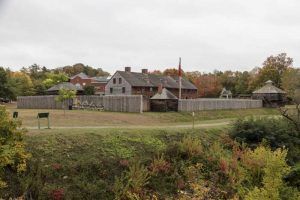 Fort Western, located in Augusta, Maine, is a former British colonial outpost built at the beginning of the French and Indian War in 1754.

It was originally built by Kennebec Proprietors, a Boston-based company seeking to settle the lands along the Kennebec River that had been granted to the Pilgrims more than a century earlier. Both the company and the Province of Massachusetts were interested in expanding their influence in the area, taking political control of North America, and severing the ties between the Abenaki tribes and the French.

The fort was established at the head of navigation on the Kennebec River to serve as a fortified storehouse in Fort Halifax, located 17 miles north. Supplies were shipped on sloops and schooners from Boston, Massachusetts, as many as four times a year, unloaded at Fort Western, and then taken to Fort Halifax.

The fort was a log palisade with blockhouses that protected a store and warehouse. Blockhouses 24 feet square and watch-towers 12 feet square guarded opposite corners, from which the view of the river and its surroundings could be seen for more than a mile. The complex also included a two-story main house. 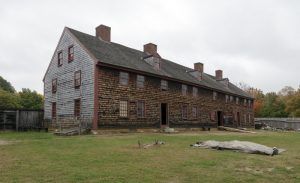 The post was first garrisoned by a Massachusetts provincial unit led by Captain James Howard, which included his sons, Samuel and William, and 15 other men who had been stationed at Fort Richmond about 15 miles below Fort Western.

During the war, Fort Western was protected behind its four-pound cannon. The garrison spent most of its time doing routine duty, including boat repair, cooking, baking, brewing, and getting wood, in addition to helping re-supply Fort Halifax.

The fort was never directly attacked, but Private Edward Whalen was captured in May 1755 as he attempted to deliver dispatches to Fort Halifax. He would spend four years in captivity, first among the Indians, then as a prisoner in France. He was exchanged in 1760. Other members of the garrison were fired upon as they returned a boat to Fort Halifax in 1757.

After the war ended in 1763, the garrison, though reduced in strength, stayed on until late in 1767 to maintain an English presence on the Kennebec River. When the last of the garrison was discharged, Captain Howard made arrangements to acquire the Fort’s buildings and surrounding lands. 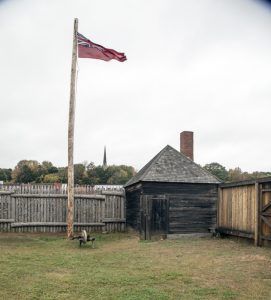 In 1769, Captain Howard purchased Fort Western and about 900 acres of surrounding land for £270. He, along with his sons, remodeled the fort into a house and trading post. His son, William Howard, was the first to take up residence, moving in with his wife, Martha, in about 1770. Soon, his brother John Howard also moved onto the property.

By this time, settlers were making their homes in the area, and public meetings were held at the Fort. Even after the town of Hallowell, located about 2 miles south of the future town of Augusta, was established in 1771, town meetings were generally held at Fort Western until a meeting house was built in 1782.

In the summer of 1775, Fort Western was again brought into prominence during the American Revolution. At this time, Colonel Benedict Arnold conceived the plan of capturing Quebec using an army sent through Maine’s woods by way of the Kennebec and Chaudiere Rivers. His expedition stopped at Fort Western, and Arnold, Daniel Morgan, Roger Enos, Henry Dearborn, and Aaron Burr stayed as guests in the garrison while their force camped outside. He and his men stayed for a week, making repairs to the fort and loading supplies. 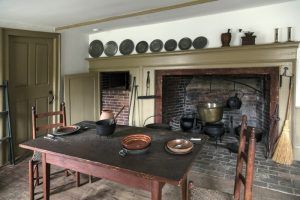 In the meantime, Captain Howard’s sons, Samuel and William, formed a partnership under the firm name of S. & W. Howard and for many years engaged in trade and shipping. This firm supplied an outlet for the area’s growing population by transporting goods to and from Boston.

William Howard lived at the fort until he died in 1810. Afterward, the old fort passed out of the family name and was divided up and occupied as a tenement house. At that time, it was surrounded by several decrepit buildings that eventually became a refuge for the illegal sale of liquor. The neighborhood became an unsavory menace to the city.

Thankfully, it was purchased by Guy P. Gannett of Augusta, a descendant of the Howard family, in 1919. He and his family restored the fort the following year, which included constructing two new blockhouses and a stockade. Afterward, the Gannett family donated it to the city of Augusta.

The sturdy 100 by 32-foot building is America’s oldest surviving wooden fort; it was listed on the National Register of Historic Places in 1969 and was declared a National Historic Landmark in 1973.

Today, it is maintained as a museum and is open from June to October. 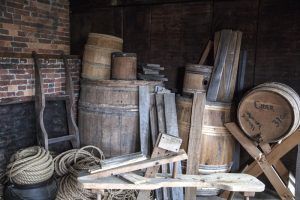