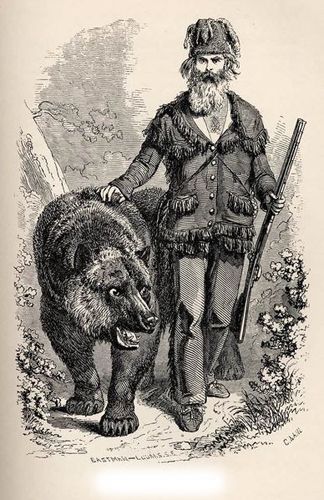 “The mountain air was in my nostrils, the evergreens above and the eternal rocks around; and I seemed to be a part of the vast landscape, a kind of demigod in the glorious and magnificent creation.” – John “Grizzly” Adams

John “Grizzly” Adams was a professional hunter of grizzly bears who became well-known after his involvement in P.T. Barnum’s Circus.

John Boyden Adams was born in Medway, Massachusetts to Eleazer and Sybil Adams on October 12, 1812. He is said to have been related to the famous Adams’ of Massachusetts, including President John Adams and patriot Samuel Adams. He received what was considered a good education for the times. However, by the time he was 14-years-old, he was working as an apprentice in the footwear manufacturing industry.

When he was 21, he left that position and became a hunter in New England’s forests. After signing on with a company of showmen as a zoological collector, John hunted and captured live wild animals in Maine, Vermont, and New Hampshire, honing his skills as a woodsman and marksman. While attempting to train a Bengal tiger for his employers, he received severe back and spine injuries, putting an end to his hunting career. After recuperating for about a year, he returned to the cobbler’s bench in Boston, Massachusetts. In 1836, John married Cylena Drury and the couple would eventually have three children.

During the California Gold Rush, Adams, along with thousands of others, made his way west. He arrived at the California gold fields in late 1849. When he failed to find his fortune in gold, he turned to hunting game to sell to the miners, trading, and finally, ranching and farming.

In late 1852, he lost his ranch near French Camp, California to creditors, and headed into the Sierra Nevada mountains to earn his living by trapping. Around this time, he was calling himself James Capen Adams. 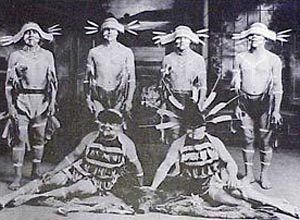 With the help of the local Miwok Indians, Adams built a cabin and stable a few miles away from present-day Pinecrest, California. In addition to trapping and hunting, he also made buckskin clothing, moccasins, harnesses, pack saddles, and snowshoes. By this time, he was 40-years-old and was described as already having long gray hair, a snowy white beard, was of average height but muscular and wiry, and wearing full-dress buckskins.

From the Sierra Mountains, Adams made a number of excursions away from his camp. In 1853, he traveled to Washington Territory, where he caught a female grizzly bear cub that was about a year old. Naming her Lady Washington, he was able to train her to follow him, carry a pack, pull a sled, and eventually, she even allowed John to ride on her back.

In 1854, he and several hunting companions traveled to the Rocky Mountains as far as Fort Bridger, Wyoming. They sold meat, hides, and some live animals to the emigrants along the Oregon Trail. At the end of that same year, he trapped a 1,500-pound grizzly bear in the Sierra. One of the largest grizzlies ever captured alive, he named the beast Samson. He also retrieved a pair of two-week-old male grizzly cubs from the den of their mother near Yosemite Valley, naming one of them Benjamin Franklin. 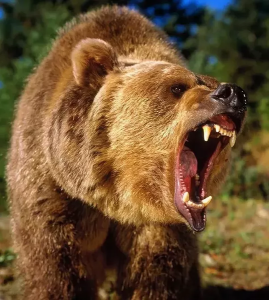 In the spring of 1855, while on a hunting trip in the Sierra, the bear cub, Benjamin Franklin, would save John’s life when a mother grizzly attacked Adams. The she-bear knocked his rifle from his hands, tore his scalp loose and dented his skull in one powerful swipe, and bit into his neck. Then, Ben Franklin, Adams’ “tame” grizzly, distracted the she-bear with a bite to her haunch and Adams climbed a tree. He was soon able to retrieve his rifle and killed the bear. Adams then returned to his camp, where it took him almost a month to recover. John and his bear, Ben, would both bear the scars of that attack the rest of their lives.

After Adams recovered, he and his companions trapped and hunted along the California Coast Range, journeying as far south as the Tejon Pass area. On their way back, they followed the coastal route through San Miguel, San Jose, and then to San Francisco, where they attracted audiences of curious onlookers. Due to their interest, Adams set up a number of impromptu shows of his bears and other animals he had collected on the trip.

In 1856, John retrieved all of his animals from Howard’s Ranch near Stockton, California where he had left them to be cared for while he was absent. He then opened the Mountaineer Museum in a basement on Clay Street in San Francisco, charging 25¢ admission. It was here that he was noticed by a newspaper reporter named Theodore H. Hittell, who promoted the menagerie in articles he wrote for the Daily Evening Bulletin. With the articles and advertising, the museum became so successful that Adams opened the Pacific Museum at a larger site at a better location.

By 1858, Adams was referred to as the “Barnum of the Pacific”, in a San Francisco newspaper. However, by the next year, he had once again overextended himself and lost his museum building to creditors, having to temporarily relocate his animals to another building.

His health was deteriorating, primarily from the head and neck attack he had received from the she-bear in California. While wrestling with and training his animals, the wound had been reopened and re-injured several times. The last time he was injured in 1859, the skull was cracked and the bone torn away, exposing the brain tissue in a silver-dollar-size area on his forehead. 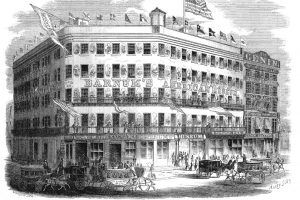 He made arrangements to relocate his menagerie and collections to New York, in hopes of joining P. T. Barnum’s show. On January 7, 1860, Adams and his menagerie departed from San Francisco on the clipper ship Golden Fleece, and after a 3 1⁄2-month voyage via Cape Horn, arrived in New York City. Though his health was much worse by the time he arrived, he immediately sought out P.T. Barnum, who quickly saw the potential of using Adams’ California Menagerie.

He joined with P.T. Barnum to perform his California Menagerie in a canvas tent for six weeks and on opening day, Grizzly Adams, with three of his tamed grizzlies, paraded down Broadway and up to the Bowery on a flat-bed wagon proceeded by a band.

Though his health was continuing to deteriorate, he managed to persuade Barnum to agree to let him perform his animals for another ten weeks for a $500 bonus. By the time the show was done, Adams could hardly walk onto the stage. He sold his menagerie to Barnum and from the proceeds of the show and the sale, was able to provide a comfortable sum for his wife Cylena.

Afterward, he retired to Neponset, Massachusetts with his wife. Just five days later, 48-year-old Adams died on October 25, 1860. Upon hearing of Adams’ death, Barnum was deeply grieved and paid for his tombstone. Adams was interred at the Bay Path Cemetery in Charlton, Massachusetts. 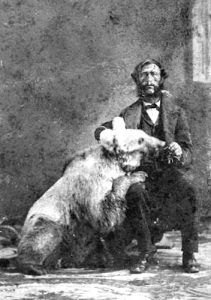 “He was dressed in his hunter’s suit of buckskin, trimmed with skins and bordered with the hanging tails of small Rocky Mountain animals; Old Adams was quite as much of a show as his beasts.” — P.T. Barnum

©Kathy Weiser/Legends of America, updated May 2021.