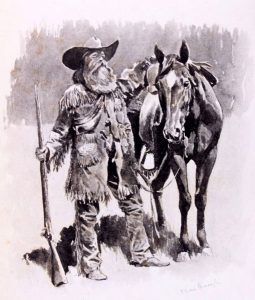 A trader in the Mountains.

He was born about 1810 at St. Charles, Missouri, of French ancestry. Little is known of his early life, but by 1840, he had made his way west and was working as a trapper and trader. In the west, he was better known as “Reshaw,” the French pronunciation of his last name.

In about 1841, he married a woman named Mary Gardiner, who was the mixed-blood daughter of trapper William Gardiner and an Oglala Sioux woman named White Thunder Woman of Chief Red Cloud’s band. The pair would have six children. Richard was called Owasakala by the Sioux.

He worked as a trader at Fort Platte, Wyoming, in the early 1840s, where it was rumored he brought liquor from Taos, New Mexico, to sell to the Indians.

In 1845 he was working with another trader named Joseph Bissonette in establishing a new post called Fort Bernard on the North Platte River in Wyoming. During their partnership, Richard ran the business, and Bissonette visited the Indians in their camps. The fort was also known as Richard’s Post.

In August 1846, while Richard was in Pueblo, Colorado, buying supplies and Bissonette was apparently trading in Indian villages, Fort Bernard was burned to the ground. It was suspected that men at rival Fort John (later Fort Laramie) might have set the fire, but this has never been proved. Bissonnette would later rebuild the fort, but Richard moved on and, for the next six years, continued to trade in the area.

In 1846, author and historian Francis Parkman met John Richard and described him:

“little, swarthy, black-eyed Frenchman… his black curling Hair… parted in the middle of his head, fell below his shoulders… he wore a frock of smoked deerskin, gaily ornamented with porcupine quills and leggings with long fringes down their sides… The small frame of Richard… was in the highest degree athletic and vigorous”.

He constructed the Ash Point Post, a small one-room trading house, in 1850. It was located about ten miles downriver from Fort Bernard, Wyoming. This post was short-lived as Richard sold it in April 1851. 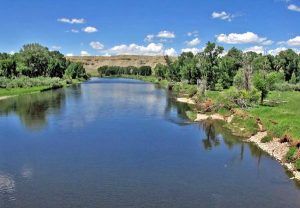 That same year, Richard, along with several partners, constructed two bridge crossings on the Platte River, one at the mouth of Deer Creek and the other near Fort Laramie. Both bridges washed out in 1852, and neither was rebuilt. But Richard didn’t give up.

In the fall of 1852, Richard established a trading post several miles downriver of the Platte River crossing near present-day Casper, Wyoming. Taking advantage of the traffic along the Oregon–California and Mormon Trails, he began to build a bridge a little bit east of the Mormon Ferry. In partnership with Joseph Bissonette, Seth Ward, William Guerrier, Charles Bordeaux, Louis Guinard, and William Kenceleur, he built the first successful bridge to span the North Platte River.

The bridge opened in 1853, and that year, traffic along the trails peaked when some 50,000 emigrants used the bridge. It became known as Reshaw’s Bridge and put the Mormon Ferry out of business. 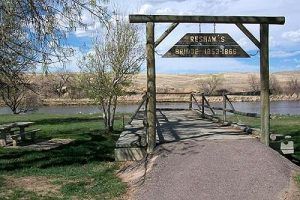 This bridge was constructed from lumber transported from the Caspar Mountains and was held together with iron bolts. The structure was over 800 feet long and 18 feet wide, requiring 23 piers filled with large rocks to span the river. Richard also built several log buildings on the south end of the bridge, which served as residences, a trading house, a grocery, a dry goods store, and a blacksmith shop. He bought out his partners in 1854.

During the Indian unrest of the mid-1850s, Fort Clay was established approximately 750 feet from the south end of the bridge. The military abandoned the camp in November of 1856, ignoring Richard’s request they stay.

However, just two years later, when the army needed to maintain a route to supply troops involved in the Mormon War, soldiers were again stationed at the site in July 1858. This post was called Camp Payne. It, too, was short-lived and closed in May 1859.

In the meantime, gold had been discovered in Colorado, and John Richard and his brother Joseph established a trading post near Cherry Creek, Colorado, in 1858. The post was one of the first permanent buildings constructed in the settlement, which eventually developed into Denver, Colorado. However, Richard’s Cherry Creek Post closed in 1859, and he returned to Wyoming.

That same year, Richard’s old partner, Louis Guinard, started building a newer and better bridge at the site of the old Mormon Ferry crossing. Completed in the spring of 1860, Guinard’s bridge and trading post became the site of a Pony Express Station and, later, a stop of the Overland Mail Company. When the transcontinental telegraph line went through the area in 1861, it literally crossed the North Platte River on Guinard’s bridge, and his trading post now included a Pacific Telegraph Company Office.

At that time, Guinard’s Bridge was referred to as the Upper Platte Bridge, and Richard’s was referred to as the Lower Platte Bridge. Though Richard’s bridge suffered from the competition, he diversified his interests and continued to work in the fur trade. However, with the constant threat of native hostilities and after Louis Guinard lost his son in an Indian attack, he sold the bridge to Richard by 1864.

In the meantime, U.S. troops had occupied Guinard’s buildings for three years during the Civil War and called the site Platte Bridge Station. The soldiers were tasked with protecting emigrants along the trails and the newly established telegraph lines against raids from Lakota and Cheyenne tribes. 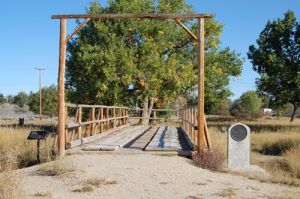 A replica of Guinard’s Bridge at Fort Caspar today

By 1865, with increased native hostilities, as well as legal problems with the United States military, Richard sold his post and bridges to the military. He and his family then relocated to Rock Creek on the new Overland Trail, which by then was carrying most of the transcontinental traffic.

He was gone before the Battle of Platte Bridge occurred on July 26, 1865, between soldiers and the Indians. In the battle, the Reshaw Bridge was partially burned. Soon afterward, Fort Caspar was established at the site of Platte Bridge Station. During the severe winter of 1866-1867, soldiers at the fort dismantled Richard’s Bridge, as well as many nearby buildings for firewood and building materials. Fort Caspar was abandoned in 1867, and almost immediately after the troops were gone, the Indians burned the buildings and the remaining bridge.

Richard finally settled down on a ranch near Bordeaux, Wyoming, where he raised horses and cattle. In November 1875, he, along with a man named Alfred Palladay, were on a trading trip to the Sioux when both men were killed at the Niobrara River crossing. California Joe Milner was implicated, but it was soon concluded that the perpetrators were Cheyenne Indians.