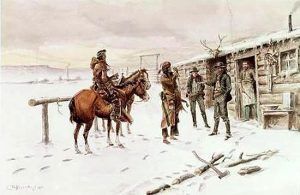 Fort Bernard, Wyoming was a small trading post located along the Oregon Trail about eight miles southeast of Fort John (which later became Fort Laramie). Situated along the along the North Platte River, it was established in 1845 at Sarpy’s Point, which was the site of a short-lived trading post built by Peter Sarpy in 1837. It was first owned by Bernard Pratte and Jean Pierre Cabanne who operated the Pratte & Cabbanne Company. Previously the company had operated Fort Platte from 1843 to 1845 on the west side of Fort John, but abandoned it in 1845 and enlisted Joseph Bissonette to move the operation to the east to attract travelers on the Oregon Trail before they arrived at Fort John.

The new trading post was named Fort Bernard, for either the owner or for his father, General Bernard Pratte, who had been a fur trader in his own time. In December 1845 the fort was sold to the Pierre Chouteau, Jr. and Company and was placed under the control of Joseph Bissonette and another trader named John Baptiste Richard, Sr. Richard ran the business and Bissonette visited Indians in their camps. The fort was also known as Richard’s Post. 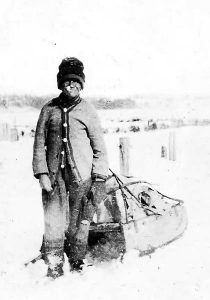 The very presence of Fort Bernard was an irritation to the American Fur Company’s Fort John, just as Fort Platte had been. Making matters worse, Fort Bernard undersold their powerful rival, at times up to 30-40%. It was also located on the Trappers’ Trail which connected it to Bents Fort, Colorado in the south.

On June 26, 1846, the members of the ill-fated Donner Party arrived at Fort Bernard along with members of the William Henry Russell party. The next day a mountain man named James Clyman, who had a long history in the fur trade and knew the country well, came upon James Reed. The two had served in the same regiment in the Black Hawk War. At the time Reed was holding Hastings’ Guide in his hands and Clyman, who had just come across the route with Hastings heading east, warned Reed and the Donner brothers to “stick to the main road.” Unfortunately, Reed was unpersuaded, leading to the Donner tragedy.

In August, while John Richard was in Pueblo, Colorado buying supplies and Joseph Bissonette was apparently trading in Indian villages, Fort Bernard was burned to the ground. It was suspected that men at rival Fort John might have set the fire, but this has never been proved.

The post was not immediately rebuilt, but in 1849, Joseph Bissonette formed a partnership with James Bordeaux and Charles Primeau and built a new post on or near the site of Fort Bernard. The new trading post also went by the name of Fort Bernard.

On August 19, 1854, the Grattan Massacre occurred near the trading post, marking the beginning of 3½ decades of intermittent warfare with Native Americans on the northern Plains.

The fort continued to thrive until 1866 when it burned down again. This time, it was never rebuilt.

Today, the Western History Center, based in Lingle, Wyoming, has been doing archaeological work at the Fort Bernard site.