Jean Pierre Cabanne was a French merchant and trader, who traveled throughout the United States.

Jean Pierre was born to Jean and Jeanne Dutilh Cabanne in Pau, Bearne, France on October 18, 1773. After receiving a good education and training in the merchandise business, he traveled to the United States with considerable capital.

He first established himself in the sugar trade in Charleston, South Carolina. Though he was initially profitable, he met with disaster when he lost two of his trading vessels at sea. He then made his way to New Orleans, Louisiana for a brief time before moving to St. Louis, Missouri, and entering the fur trade business. On April 8, 1799, he married Julia Gratiot, the daughter of a successful area merchant, and the pair would eventually have nine children.

By 1801, he was actively trading with the Kanza Indians and was illegally involved in operations with John Jacob Astor by the following year. Four years later, he obtained the licenses to officially trade with tribes as far north as Sioux country along the Missouri River. Though he remained a permanent resident of St. Louis, he spent part of each year in the wilderness and was associated with a number of well-known fur traders including Bernard Pratt, Pierre Chouteau, Jr., Bartholomew Berthold, Manuel Lisa, and others. 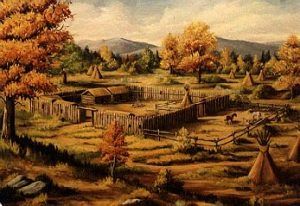 Along with the American Fur Company, he established Cabanne’s Trading Post on the Missouri River between Omaha and Fort Atkinson in 1822. It later became Fort Robidoux near present-day Dodge Park in North Omaha, Nebraska. For several years he was a partner in the Pratt, Chouteau & Co. and entered into a succession of companies, that eventually merged into the American Fur Company in 1826.

During this time he amassed a large fortune in the fur trade business, but by the early 1830s, the fur trade on the lower Missouri River had begun to decline. He then became briefly involved in the Santa Fe trade and retained his interest in the American Fur Company until about 1840, when he and Bernard Pratte formed an opposition company called Pratte and Cabanne.