Immigrants at Ellis Island about 1910

From its beginnings, the United States has been shaped by people from many nations. Some of the men considered today to have been the founders of the United States were born far from the 13 original colonies. Alexander Hamilton, for example, was born on the island of St. Kitts in the British West Indies. Nonetheless, issues surrounding immigration and citizenship have caused debate and controversy since the 1790s. With each new wave of immigration, Americans responded with a spectrum of attitudes ranging from the hostile to the hospitable. 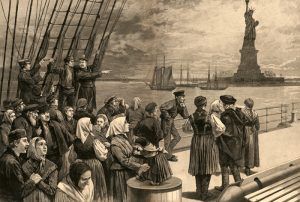 New York – Welcome to the Land of Freedom

Although the United States was founded with the help and inspiration of people and ideas from various countries, some U.S. citizens have voiced suspicions of foreigners and immigrants throughout its history. In 1798, a period of diplomatic tension with France culminated in a series of laws known as the Alien and Sedition Acts. Where immigration was concerned, the bill extended the period of residency required for citizenship from five to 14 years. It also allowed then-President John Adams to deport any “alien” considered to be “dangerous to the peace and safety of the United States.” By 1800, the sentiment behind the acts had diminished but would revive decades later as German and Irish immigrants came to the United States in larger numbers.

German and Irish immigrants left their homes for various reasons, ranging from famine to political repression. However, some native-born Americans resented these new arrivals. In 1849, some organized into an anti-Catholic, anti-immigrant political group famously called the “Know-Nothings,” which derived its name from the secrecy of its members. 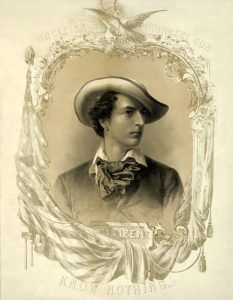 Know-Nothings believed that native-born Americans were superior to the newly arrived immigrant groups on the basis that Irish and German immigrants tended to be poorer and Catholic, which Know-Nothings took as traits of cultural and economic backwardness. The Irish, in particular, became economic scapegoats during periods of economic uncertainty, a pattern that would repeat itself during subsequent waves of immigration.

Resentment toward the Irish began to abate after the Civil War when Irish American communities became more established.

In the late 1800s, people in many parts of the world decided to leave their homes and immigrate to the United States. Fleeing crop failure, land and job shortages, rising taxes, and famine, many came to the U. S. because it was perceived as the land of economic opportunity. Others came seeking personal freedom or relief from political and religious persecution. With hope for a brighter future, nearly 12 million immigrants arrived in the United States between 1870 and 1900. During the 1870s and 1880s, the vast majority of these people were from Germany, Ireland, and England–the principal sources of immigration before the Civil War. That would change drastically in the next three decades.

Immigrants entered the United States through several ports. Those from Europe generally came through East Coast facilities, while those from Asia generally entered through West Coast centers. More than 70 percent of all immigrants, however, entered through New York City, which came to be known as the “Golden Door.” Throughout the late 1800s, most immigrants arriving in New York entered at the Castle Garden depot near the tip of Manhattan. In 1892, the federal government opened a new immigration processing center on Ellis Island in New York harbor. 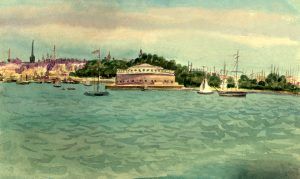 Although immigrants often settled near ports of entry, a large number did find their way inland. Many states, especially those with sparse populations, actively sought to attract immigrants by offering jobs or land for farming. Many immigrants wanted to move to communities established by previous settlers from their homelands.

Once settled, immigrants looked for work. There were never enough jobs, and employers often took advantage of the immigrants. Men were generally paid less than other workers, and women less than men. Social tensions were also part of the immigrant experience. Often stereotyped and discriminated against, many immigrants suffered verbal and physical abuse because they were “different.” While large-scale immigration created many social tensions, it also produced a new vitality in the cities and states in which the immigrants settled. The newcomers helped transform American society and culture, demonstrating that diversity and unity are a source of national strength. 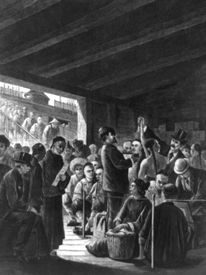 Chinese immigrants at the San Francisco custom-house, by P. Frenzeny 1877

During the industrial era, immigrants from various parts of Asia and Eastern and Southern Europe came in even greater numbers than those from Western Europe. Tales of the gold rush in the American West drew thousands of Chinese immigrants into North America beginning in the 1850s, as Irish immigration peaked in the East. Like thousands of disappointed Americans, they found that their opportunities were not as bright as the gold they were seeking. Many early Chinese immigrants became laborers in mines and railroads, helping to construct the Central Pacific Railroad. Others became agricultural laborers.

A major downturn in the American economy during the 1870s caused a backlash against Chinese immigrants in the workforce. Coercion and violence were used to eliminate competition by Chinese laborers and businesses. This outburst influenced government action, leading to the 1882 Chinese Exclusion Act, which excluded Chinese laborers from entering the country and barred all immigrants of Chinese descent from obtaining citizenship. It was the first legislation of its kind in American history.

Between 1880 and 1920, an estimated 4 million Italian immigrants entered the United States. Many of them passed through the cramped processing center at Ellis Island just outside of New York City; Ellis Island would become a symbol of immigration during these decades. This generation of Italian immigrants hailed from rural and less developed areas and performed unskilled labor. Like other immigrant groups, Italians faced harsh conditions in these unskilled jobs. Italians who tried to fight these conditions by joining unions found that many established unions would not accept foreign-born workers. Like the Irish before them, Italians became scapegoats for economic difficulties as jobs became fiercely contested. 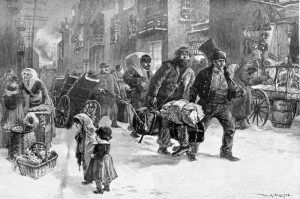 Italian Immigrants in New York by William A. Rogers, 1890

Some people derided them as inferior to Northern and Western Europeans because of their “Mediterranean” blood, and Nativist elements blamed them for everything from domestic radicalism to organized crime. Italians living and working in towns and cities across the United States were subject to physical attacks by anti-immigrant mobs or organized groups such as the Ku Klux Klan.

The area now known as Poland was not an independent country during the 19th century. Divided between three Empires – Prussia, Austro-Hungary, and Russia – Poles confronted economic difficulties and political and religious repression. By 1910, an estimated 900,000 Polish immigrants had entered the United States from both the East and West coasts. The Poles spread throughout many different regions and contributed to the growth of Midwestern states such as Illinois, Wisconsin, and Michigan. Others remained in New England. Polish immigrants established themselves in heavy industries such as mining. They encountered the same workplace difficulties as other immigrants struggling with low wages and anti-immigrant prejudices. 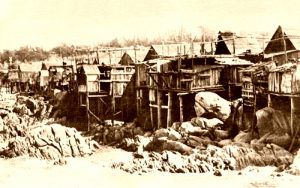 Anti-immigrant sentiment peaked again after the end of World War I. New immigration restrictions put into place by Congress established quotas limiting most immigration by groups outside Western Europe. The era of immigration ended for the time being. Many who were already living in the United States built lasting communities and contributed to their new country. Many recently arrived groups made great strides in American society, but some found it more difficult. Chinese immigrants maintained strong support networks in what became known as “Chinatowns” – Chinese American communities in major urban areas throughout the country. Nonetheless, Chinese immigrants would continue to struggle with negative stereotypes. Italian and Polish immigrants also maintained strong support networks, and their children adapted to the new environment. Irish Americans steadily made inroads into American life and even fielded presidential candidates.

Several American soldiers who served during World War II were descended from recent immigrants, such as the nearly one million Italian Americans who served in the Armed Forces. In many ways, integration became the catchword for foreign-born Americans and their children during the postwar era. Despite recurring fears that immigration would stain the fabric of American society, these immigrant groups became uniquely American while also preserving their own traditions. As a new generation of immigrants enters American life, many controversies and tensions evident in previous periods might again become apparent.

Today, the majority of Americans trace their family origins to a country other than the United States. Many of our forebearers came to this country seeking greater freedom or an opportunity for a better life. Some of us can trace our roots to ancestors who came against their will and were forced to provide the labor that helped build the nation. Whether they were the native inhabitants of this continent or came from distant shores, the citizens of the United States brought to this nation a pride in their heritage and distinctive cultural traditions and values.

Ellis Island – The Island of Hope