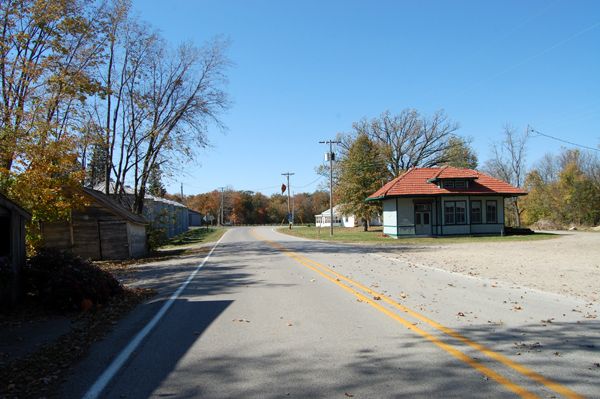 Funks Grove, Illinois got its start, along with nearby Shirley, Illinois by the Funk family. The unincorporated community is located on Route 66 in McLean County southwest of Bloomington.

The grove was first settled by brothers Isaac and Absalom Funk, who came to the region from Kentucky in 1824. Choosing the location for its water supply, fertile soil, and timber, they were soon joined by Robert and Dorothy Funk Stubblefield who followed from Ohio. Though the Funks may not be household names in Illinois history, they were a very influential family in this area. Isaac Funk soon amassed some 25,000 acres of land and was the first to start cattle-feeding operations in the Midwest. He and his brother Absalom built the meat-packing house in Chicago – then known as Fort Dearborn.

None other than Abraham Lincoln served as the family attorney and he and Isaac Funk were largely responsible for bringing the Chicago & Alton Railroad through the region, sidetracking it from its planned route through Peoria. he would also serve as an Illinois State Representative, Senator, and one of the founders of the Illinois Wesleyan University in Bloomington. Isaac and his wife Cassandra would have ten children, all of which would have important leadership roles in government, banks, universities, and private ventures. 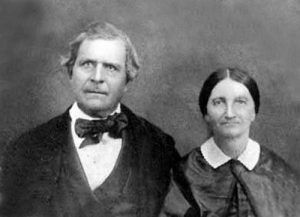 Isaac’s son, LaFayette would play a major role in the cattle business, was the co-founder and boss of the Chicago Union Stockyards, and an Illinois State Senator. In 1863, he built a home for his wife, Elizabeth, in nearby Shirley, Illinois. The couple was known to have harbored escaped slaves on their farm during the Civil War. The home still stands in Shirley today and is open for tours.

LaFayette’s son, DeLoss would create a power plant for the homestead in 1905 and would later wire all the Funk farms for telephone service. Another of LaFayette’s sons, Eugene, along with 11 other Funk family members, founded Funk Bros Seeds in Bloomington in 1901. It still operates today under the name of Ciba Seeds.

The family was also responsible for bringing the first modern soybean crushing plant to the Midwest, the development of hybrid corn, and other improvements to the region. 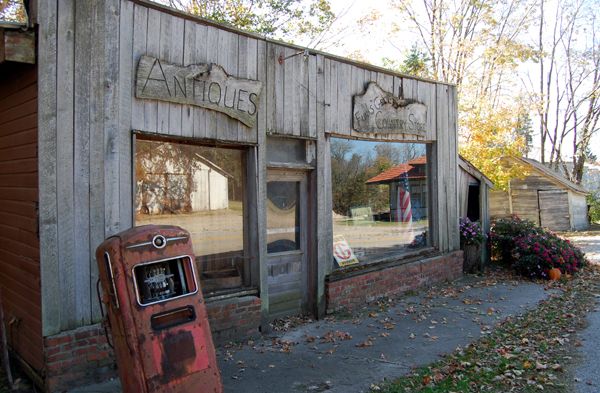 This building once served as a grocery store and gas station in Funk’s Grove. Later it was utilized as Antique Store. It too is closed today, Kathy Weiser-Alexander.

While I daresay that most people don’t know about the rich contributions made by the Funk Family to the area, they do know that Funk’s Grove is home to “Maple Sirup.” Upon nearing this old community, a rustic sign stands on a grassy embankment with the simple words “Maple Sirup.” Here, amongst the prairie, sits a natural maple grove dominating the landscape and filled with sugar and black maples of record size. The actual site of the syrup operation is about ¼ mile to the south.

At the sign, situated at Funks Grove Road, turn west to the sleepy little hamlet of Funk’s Grove. Here sits the old Walker Store which once operated as a grocery store and gas station. Later, it was utilized as an antique store, and though still filled with dusty relics, it is closed today. The historic depot that stands in the middle of the clearing was actually the passenger depot in nearby Shirley before it was moved to Funk’s Grove. The original Funk’s Grove Depot is located at the Funk’s Grove Camp to the south.

Passing by still utilized grain silos, the road continues westward about a mile to the old cemetery and Funk’s Grove Church which dates back to 1845. Adam Funk, Isaac’s father, chose the location of the cemetery and in 1830, he was the first to be buried there.

When the Funk and Stubblefield families first came to the area church services were first held in their private homes before a log school building was constructed in 1827, at which time they were held there. Though the building is gone, it is marked with a large stone just west of the still-standing church building. However, Robert Stubblefield would later insist on building a “real” church building and he, along with Isaac and their sons erected the building in 1864-65. The church, an outdoor “chapel,” and the cemetery are now owned and managed by the Funk’s Grove Cemetery Association. The church, which still features its original walnut pulpit and altar rail, white pine pews, and original glass is open year-round and can be rented for weddings. 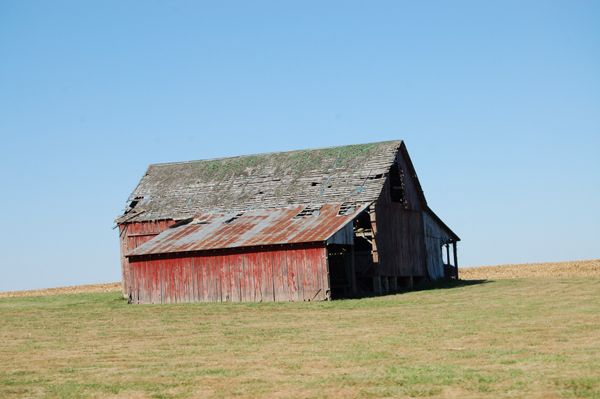 This old barn that sits about two miles west of Funk’s Grove was the original Stubblefield homestead by Kathy Weiser-Alexander.

On down the road about another mile is the original homestead site of Robert Stubblefield. All that’s left today is a rustic barn sitting in the middle of a field. Near here also was once the Burger Sawmill and Farm. There is nothing left of the sawmill, but a sign marks the spot.

The Sugar Grove Nature Center, which protects over 1,000 acres of the largest remaining intact prairie grove in Illinois, is just south of the old townsite of Funk’s Grove. It includes over five miles of trails and hosts various events throughout the year.

After having visited the sites of Funk’s Grove, return to Route 66 and continue ¼ mile south to Funk’s Grove Camp, the site where maple sirup is made. For generations, the Funk family used the many maple trees to make syrup and maple sugar for their personal use. Years later, Arthur Funk, Isaac’s grandson, capitalized on this when he opened the first commercial sirup camp in 1891. In 1896 Arthur’s brother, Lawrence took over the operation and in the 1920s the sirup operation was passed to Hazel Funk Holmes.

When Route 66 came through about this time, the Maple Sirup business boomed, and hardly could the sirup be made for the season when it was already sold out.

When Aunt Hazel was ready to retire she asked her nephew, Stephen Funk, and his wife, Glaida, to take over the grove and the surrounding farm in 1947. However, before transferring the operation, she arranged for a trust insuring that Funk’s Grove Pure Maple Sirup would be around for generations to come. Although the trees are worth millions, the trust stipulated that it would never be used for anything other than making maple sirup. The trust also stipulated that the spelling of the word “Sirup” remain the same. 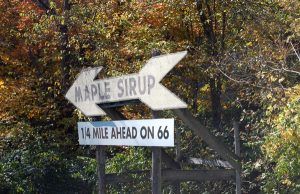 As to the spelling of the word, a sign at Funk’s Grove had this to say:

Historically, according to Webster’s Dictionary, “sirup” was the preferred spelling when referring to the product made by boiling sap. “Syrup” with a “y”, however, was defined as the end product of adding sugar to fruit juice. Though the “I” spelling is no longer commonly used, the United States Department of Agriculture and Canada also still use it when referring to pure maple sirup. Hazel Funk Holmes, whose trust continues to preserve and protect this timber for maple sirup production insisted on the “I” spelling during her lifetime. It’s another tradition that will continue at Funks Grove.

In 1988, Stephen Funk retired and his son Michael and wife, Debby took over the business.

Today, a seventh-generation of Funks continue to make sirup at this historic place that feels as though it stepped right out a century ago, yet is just miles off of busy Interstate 55.

The Funk family also still continues to farm about 2,000 acres of the original homestead and manages about 1,000 head of cattle

Continue your journey down Route 66 for more vintage peeks of the Mother Road at McLean, Atlanta, and Springfield, Illinois. 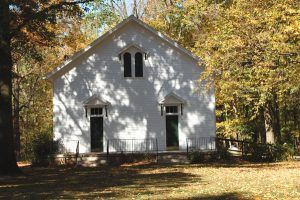 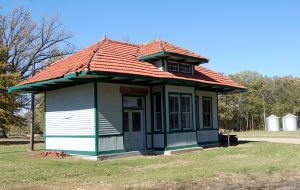 The old depot that sits in the clearing in Funk’s Grove was actually moved from Shirley, by Kathy Weiser-Alexander.