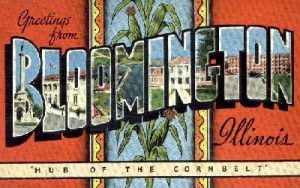 Before entering Bloomington, you will first travel through Normal, Illinois, though the two cities have virtually merged over the years. As you travel Route 66, you’ll have to watch carefully to observe where Normal ends and Bloomington begins.

In 1854 the town of North Bloomington was platted in an area commonly known as “The Junction,” at the intersection of the Illinois Central and the Chicago & Alton railroads. This parcel of land belonged to Joseph Parkinson, after whom Parkinson Street was named. Though platted, the town was not developed until three years later when Jesse Fell began to build in an area northeast of the original plat. Fell is referred to as the “founding father” of Normal, who soon became a central figure in the town’s development. Early industries in the town included nurseries, horse breeders, and canneries.

In 1857, Governor William Bissell signed a bill to create a “normal” school, the term used for schools established as teachers’ colleges. Jesse Fell took up the campaign for Bloomington and obtained financial backing for the school. Abraham Lincoln, as an attorney, drew up the bond guaranteeing that Bloomington citizens would fulfill their financial commitments. The University first held classes in Bloomington while the campus was built north of the town. 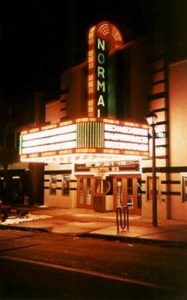 Old Main, the all-purpose building for the University, was completed in 1861, and the state’s first college was established. Four years later, in 1865, the town was officially incorporated utilizing the name of Normal. This same year, legislation was passed to establish the Civil War Orphans Home in Normal. Two years later, the Civil War Orphans’ Home was opened, later known as the Illinois Soldiers’ and Sailors’ Children’s School.

The first successful canning business was started in the 1870s, and the town became a shipping center for berries, small fruits, and vegetables in the next decade.

On August 4, 1890, a grocery store caught fire, destroying several downtown businesses. As a result, much of the downtown area was rebuilt into two-story brick buildings still in use today. This fire, along with another in 1896, led to the purchase of fire extinguishing equipment and the establishment of a volunteer fire department.

In the 1920s, buses began to replace the streetcar lines in Normal and Bloomington. When Route 66 was designated, the area began to sprout up new businesses to accommodate the many travelers on the road. Gus and Edith Belt attached a dining room to the side of their Shell Gas Station and called it Shell’s Chicken. However, Gus soon realized that central Illinois had plenty of chicken restaurants and wanted to do something different. With a bit of help from his friends, Gus began to sell a unique product to the many travelers of the Mother Road – the steak burger. In February 1934, the first Steak ‘n’ Shake was opened in Normal, Illinois. 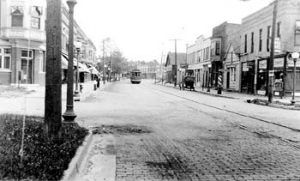 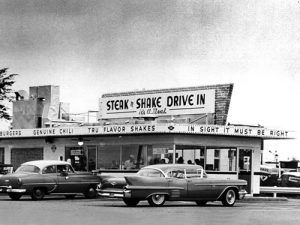 Seamlessly, you enter Bloomington, a city founded decades before the town of Normal was born. In its early years, the settlement was formed near a large grove of trees utilized by the Kickapoo Indians before white settlers began to arrive in the early 1820s. Before a settlement was established here, several trappers hid a keg of liquor in the grove. However, when the Indians found it, they drank it, and the stand of trees took on the name Keg Grove. However, when the first settlers began to build upon the land, they changed the name to Blooming Grove due to the many flowers in the area. 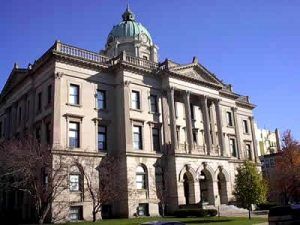 The McLean County Museum of History is housed in the historic 1903 courthouse, photo courtesy City of Bloomington.

When the County of McLean was incorporated on December 25, 1830, James Allen donated 60 acres for a new town to hold the county seat. The place once referred to as Keg Grove and Blooming Grove became Bloomington. The town was laid out, and on July 4, 1831, lots were sold at a festive event. Before long, the county’s rich soil attracted farmers, and Bloomington’s downtown district was born.

During these early years, Abraham Lincoln often rode the circuit to Bloomington, conducting business from the now-restored Miller-Davis building at 101 N Main Street. Lincoln met many lawyers and prominent businessmen here, including Jesse Fell, who first encouraged Lincoln to run for president.

The meeting resulted in Lincoln writing his autobiography that Fell distributed to the Eastern press, introducing Lincoln to the national political scene. Another man who was instrumental in Lincoln’s win of the 1860 presidential nomination was Judge David Davis of Bloomington. In 1872, Davis and his wife Sarah built an elegant Victorian Mansion at 1000 E. Monroe Drive, which continues to stand today, furnished with opulent European fixtures and serving as a museum.

At the turn of the century, a disastrous fire claimed much of Bloomington’s downtown area; however, agriculture, highways, railroads, and insurance continued to influence the city’s growth. When Route 66 came through in 1926 along the Chicago & Alton Railroad corridor, numerous businesses sprouted up along the route and in the heart of Bloomington’s downtown district.

When superhighway I-55 replaced Route 66, it bypassed downtown Bloomington, and its historic businesses began a quick decline.

Today, this city of some 65,000 people has dedicatedly restored its historic downtown area, which continues to display much of its nineteenth-century charm in its restaurants, shops, and galleries.

While in Bloomington, don’t miss the McLean County Museum of History, housed in the historic 1903 courthouse at 200 N. Main Street. Listed on the National Register of Historic Sites, the museum displays items from early settlers, Abraham Lincoln, and a glimpse into the lives of Bloomington’s early residents. For a view of the Route 66 era, Cotton’s Village Inn continues to stand at 410 N. Main in Bloomington.

Continue your journey down old Route 66 to the ghost town of Funks Grove and more vintage-era sites at McLean and Atlanta, Illinois.