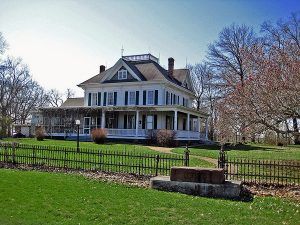 Shirley, Illinois, located on Route 66 in southwestern McLean County, got its start in 1854 as a farm and railroad settlement. However, it would be years before an “official” town was laid out.

The first pioneers of the area were brothers Isaac and Absalom Funk, who came to the region in 1824, amassed a huge cattle ranch of 25,000 acres, and established Funk’s Grove just about four miles to the south. Isaac Funk, along with his attorney and friend, Abraham Lincoln, were responsible for bringing the Chicago & Alton Railroad through the region, sidetracking it from its planned route through Peoria.

LaFayette Funk, son of Isaac Funk, cattleman, co-founder, and boss of the Chicago Union Stockyards, and Illinois State Senator built a home for his wife in Shirley in 1863. The home was state of the art at the time of its construction, containing both hot and cold running water, and over the years was updated to include the first-ever electric kitchen island and a lighted tennis court. Called the Prairie Home today, the mansion has been preserved and is open for tours, featuring 13 rooms of original furnishings, as well as memorabilia and antiques collected by several generations of the Funk family. 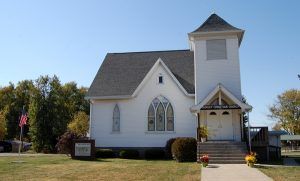 The Shirley Christian Church has been serving the area since 1839. Photo by Kathy Weiser-Alexander.

Another early pioneer was a man named John M. Foster who came to the area from New Hampshire. He and others soon built homes near the switch of the Chicago & Alton Railroad. In 1866 Foster laid out a townsite. Consisting of just ten small blocks, Foster’s home, a store, and the railroad station was located on the south side of the railroad tracks. A warehouse and mill were situated on the north side. Later, a hotel was built in the small town as well as a Methodist and Christian Church. By 1895, there were about 20 homes in the town.

Unincorporated today, Shirley boasts a population of about 375 people. While visiting this historic community, be sure to visit the Funk Prairie Home at 10875 Prairie Home Lane. Next to the mansion is the Funk Gem and Mineral Museum, which houses a large display of rare gems, minerals, fossils, petrified wood, and lapidary art in Illinois. Collected by Lafayette Funk II, the grandson of the Senator who built the mansion, he amassed the unusual collection for years before his death at the age of 95 in 1992. The museum bills itself as the largest one-man mineral collection in the world. It also features Native American artifacts collected from the Funk farmstead, interprets the Funk Brothers Seed Company, and other items collected by the Funk Family.

Route 66 continues southward for just about four miles before it comes to Funk’s Grove, home of Maple Sirup.