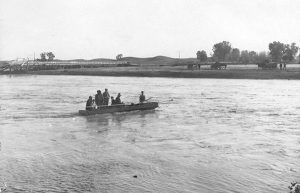 The Santa Fe Trail continued into Hamilton County, Kansas passing near the present-day towns of Kendall, Syracuse, and Coolidge before making its way into Colorado.

Old Fort Aubrey was once situated about four miles southeast of Syracuse. This fort was established to protect pioneers from Indian raids in 1865. It was only active for nine months and was abandoned. The remains of the fort today consist only of three clusters of dugout depressions. 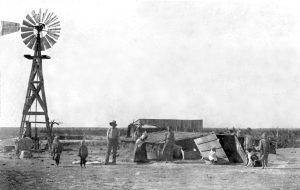 The Aubry Crossing of the Arkansas River, approximately three miles downstream from the site of Fort Aubry, was used more than the Upper Crossing near Lakin, Kansas, and it rivaled the traffic at the Middle Crossings for about ten years.

The route was first opened in 1850 and became an important path from the Arkansas River to the Oklahoma Panhandle because water supplies were more reliable along this route than along La Jornada portion of the Cimarron Route. The importance of this route led to the establishment of two military posts in 1865, Fort Aubry and Camp Nichols in the Oklahoma Panhandle. Though the Aubry Crossing has long since disappeared, wagon ruts can still be seen in the area and a spring still exists near the old fort site.

The trail passed out of the county and the state near the present town of Coolidge and ran on up the Arkansas River to where it turned southwest to Santa Fe via Trinidad, Colorado, and Raton Pass, New Mexico.