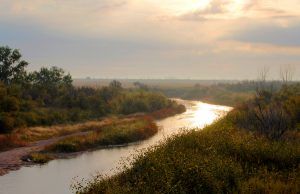 The Mountain Branch of the Santa Fe Trail followed the north side of the Arkansas River from Finney County into Kearny County, Kansas snaking its way through present-day site of Deerfield. About three miles west of Deerfield on the north side of US Highway 50, a set of parallel ruts can still be seen ascending a hill to the east. Known as Charlie’s Ruts or Bentrup’s Ruts, these 12 intact swales span approximately 800 feet. 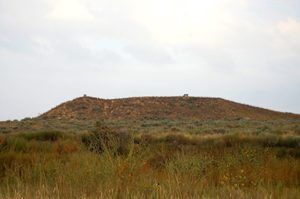 Indian Mound near Lakin, Kansas on the Santa Fe Trail by Kathy Weiser-Alexander.

The trail continued southwest towards present-day Lakin, Kansas. About six miles southwest of this community, on the north side of the river road, is a place called Indian Mound. Even before the Santa Fe Trail was established, this naturally-occurring rock formation was used as a way-finder for nearby Chouteau’s Island. After the establishment of trade with Santa Fe, this mound was used to also denote the location of the Upper Arkansas River crossings and the last major opportunity to choose between the Mountain or Cimarron routes of the Santa Fe Trail.

During the trail’s active days, the mound was much bigger, once being visible from Lakin. However, over the years, people looking for relics have hastened its erosion, though the view from atop the mound is still impressive today.

Somewhere in this area was a place called Bluff Station, which was thought to have been built by Major Bennett Riley’s troops in 1829. It was later used in the mid 19th century by stage companies as a relay station. Though remains of the walls of the station were said to have visible as late as 1900, its location remains a mystery today.

Located due south of Indian Mound was once a place called Chouteau’s Island. Though it has long since disappeared due to erosion by the Arkansas River, it was once an important landmark on the trail. It was near here, in the spring of 1816 that Auguste P. Chouteau’s hunting party was traveling east with a winter’s catch of furs when they were attacked near the river by 200 Pawnee Indians. The men retreated to Chouteau’s Island to resist the attack and beat off the Indians. In the Battle of Chouteau’s Island, the trappers lost one man and three were wounded. Seven of the Indians were killed. 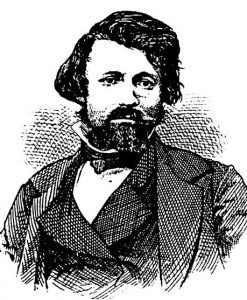 In 1825 increased travel on the Santa Fe Trail brought a government survey and Chouteau’s Island was listed as a turning off place for the trek to the Cimarron River and southward on the Cimarron Branch to Santa Fe. This route was sometimes called the “Aubry Route” since Francis X. Aubry was known to have partially followed it on at least one of his famous rides between Santa Fe, New Mexico, and Independence, Missouri. It was a much better-watered route than the one by way of Cimarron Crossing.

It was also here in 1829 that the first military escort on the Trail camped while the trader caravan proceeded to Santa Fe. At that time, the Arkansas River was the international boundary. But, it wasn’t Mexicans the soldiers needed to worry about, rather, they spent the summer fighting off Indians, losing several men and part of their oxen. The return from Santa Fe of the caravan with a Mexican escort was much celebrated.

Beyond Chouteau’s Island, as the wagon trains turned south to go down to the Cimarron River, they skirted the west side of a small, very deep lake called Clear Lake. It was about 50 feet in diameter, and, at one time, it was sounded to the depth of 250 feet without finding any bottom. When the wagons passed this point they followed Bear Creek Pass through the sandhills.

This section of the trail was abandoned by March 1870 when the Kansas Pacific Railroad came through to Kit Carson, Colorado.