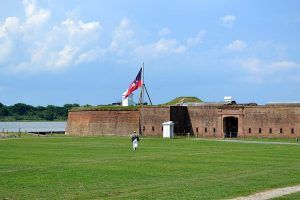 The oldest standing brick fortification in Georgia and a National Historic Landmark, Old Fort Jackson not only provides a wealth of history but is also allegedly haunted.

Officially called Fort James Jackson, this restored 19th-century fort was built when President Thomas Jefferson authorized the construction of eight forts in the area to defend the Savannah area. One of these fortifications included Fort Jackson who was named for James Jackson, a British native who fought In the American Revolution and rose to the rank of colonel. When he was just 25 years old, he accepted the surrender of the British in Savannah at the close of the revolution. He was later a U.S. Representative, U.S. Senator, and Governor of Georgia.

The fort was built between 1808 and 1812 over a 1776 earthen battery from the American Revolution. It was initially built as a six-gun fort with three two gun batteries facing the water. The back of the fort was open and unfortified. 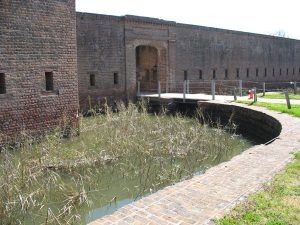 In the War of 1812, local militias and U.S. troops saw active duty at Fort Jackson. After the war, two periods of construction followed at the fort. A moat, drawbridge, brick barracks, privies, a rear wall, and another powder magazine were added.

During the Civil War, Fort Jackson and nearby Fort McAllister and Fort Pulaski defended Savannah from Union attack. In 1862, Fort Jackson was shelled from a ship captained by an escaped slave named Robert Smalls. The fort was commanded by Colonel Edward Clifford Anderson and would become the Confederate Headquarters for the Savannah River defenses, including the Confederate Navy. The Confederates held the fort until December 1864, when it was evacuated as General Sherman approached. The departing Confederates set the fort afire, spiked the guns, and destroyed everything of military value. Union troops occupied the fort until the end of the war. The Confederate forces retreated to South Carolina, where they joined other forces and continued to fight until April 26, 1865, when they surrendered to General Sherman’s army at Durham, North Carolina.

After the Civil War, the fort was placed in caretaker status and was renamed Fort Oglethorpe in 1884 and carried that name until it was decommissioned in 1905. It was purchased by the city of Savannah in 1924 for park purposes but was not fully restored until the 1970s.

As to the ghosts of Old Fort Jackson, the one most often sighted is thought to be that of a Confederate private by the name of Patrick Garrity. Garrity had a problem with his superior, Lieutenant George Dickerson. One night when Garrity was on guard duty near the drawbridge, he was approached by Lieutenant Dickerson, and for reasons unknown, the private bludgeoned his superior with his musket, breaking both his musket and the officer’s skull in four places. Private Garrity then fled the scene by jumping into the moat, but his escape was ineffective, as he drowned in the moat. Lieutenant Dickerson survived the beating but was unable to remember the attack. He never fully recovered and was forced to step down from his command.

Today, a ghostly specter is often spied at the site of the attack, believed to be that of Patrick Garrity. Said to be dressed in a Confederate uniform, the soldier walks along the parade ground or stands near the drawbridge. Some reports say that the apparition appears only from the waist up.

Garrity is not alone; another silhouette of a soldier has been reported standing on the casement walls above the parade ground. Other fallen soldiers are also seen in various areas, some strolling and others intensely manning their posts with a watchful eye. On one occasion, when a cleaning lady reportedly heard strange noises, she turned around to come face to face with a Confederate soldier standing in a doorway. After glaring at her, the spirit vanished.

Many who visit the old post describe feeling nervous energy or eerie feelings just before they glimpse a darting shadow or a full-fledged apparition of a historic soldier. Others report hearing phantom footsteps and other strange sounds.

Situated on the Savannah River, two miles east of the city of Savannah, Fort Jackson is located at 1 Fort Jackson Road. The old fort is owned by the state of Georgia and operated as a museum by the Coastal Heritage Society. Fee for admission. 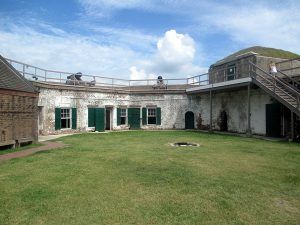