Spain settled Georgia’s Sea Islands in the second half of the 16th century and quickly established Catholic missionary provinces among the indigenous tribes. Cumberland Island, the largest of Georgia’s isles, was the site of a large Spanish fort and several Catholic missions where members of the island’s large Timucua tribe learned the Spanish language and converted to Catholicism. The Spanish occupation of the island lasted almost a century, ending only when pressure from other European and American Indian competitors and raids by pirates forced them to abandon the Georgia Sea Islands and move south to St. Augustine, Florida. In the 18th century, Britain and then the United States owned the island, and it passed into private ownership. Today, its natural beauty and historic features are preserved by the Cumberland Island National Seashore.

During the early decades of Spanish Florida, the colonial territory stretched from South Carolina to the Gulf of Mexico. In 1565, Florida governor Pedro Menéndez de Avilés led the first successful colonizing expedition of civilians, priests, and soldiers to the colony. Upon arrival, Menéndez forced a small party of French settlers from the region and then established missions, towns, and forts along the eastern coast, including St. Augustine, the oldest surviving European city in the United States. The Spanish colonized the Georgia coast at that time and settled on its defensible barrier islands. In 1569, colonial soldiers built a large fort and garrison on Cumberland Island, which they called San Pedro Island, in present-day southeast Georgia. European and Native American traders had already known the island for its profitable sassafras tree production, and the Timucua Indians called the island “Wissoo,” which means sassafras. In 1587, Franciscan priest Baltazar Lopéz arrived on the island and established the San Pedro de Tacatacuru mission.

At the island and throughout inland Georgia and northern Florida, the Spanish made contact with the Timucua, an American Indian group that lived in present-day Georgia and Florida during Spanish colonization. The Timucua included many tribes that spoke different dialects of the Timucua language, including the Tacatacuru tribe that lived on Cumberland Island and spoke the Mocama dialect. The San Pedro missionaries’ goal was to convert the Tacatacuru tribe to Catholicism and persuade the Indians to adopt Spanish culture. In exchange for the benefits of living at the mission, the Tacatacuru labored to support the Spanish.

The mission system dramatically altered the lives of the Tacatacuru at Cumberland Island. Before the Spanish arrived, the Tacatacuru moved seasonally between the island and the mainland. Afterward, the tribe lived permanently on the island and adopted a sedentary lifestyle based on European animal husbandry and agriculture that kept them close to the mission year-round. Spanish missionaries taught the Tacatacuru Christians to speak the Spanish language and some to read and write it. The missionaries also learned to speak the Timucuan dialects and created a written form of Timucuan, which some of the indigenous people learned and used to communicate with each other. In the early 17th century, Franciscan missionary Francisco Pareja wrote several Catholic primers in Timucuan.

The missionaries oversaw the construction of the first San Pedro de Tacatacuru church in 1587. Though there are no records left describing what the first mission looked like, it is possible to speculate. Other similar Spanish mission churches in the region were built from wattle and daub, which is woven wooden branches or strips plastered with a simple mixture of mud, clay, or animal dung, and they had roofs of thatched palmetto leaves. 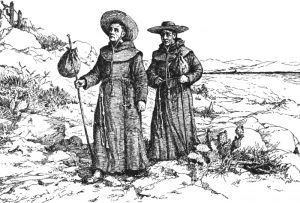 In 1597, Guale Indians from the north attacked the island and destroyed the Spanish mission buildings. Led by chief “Don Juan,” the island’s Tacatacuru Catholics defended the island against the attack. They replaced the first church with a second in 1603, called San Pedro de Mocama. According to reports, it was more impressive than the first mission church, with walls of wooden slats instead of branches and mud. The Franciscans also built a second adjacent mission, San Pedro y San Pablo de Porturibo, on the island’s north end. They founded another mission, San Felipe de Athulteca, in 1675, and the Spanish intended to continue building on the island. Still, outside threats forced them and the Catholic Timucua to abandon their missions by 1684.

When England officially settled Carolina in 1670, its English and Scottish colonists put pressure on Spanish Florida’s northern border to force the Spanish to move south. At Cumberland Island, Spanish and Timucua Catholics lived in fear of raids and enslavement by the British and the unconverted American Indian tribes. In 1684, the colonists were planning to abandon their settlements when two separate attacks by English and French pirates destroyed the remaining Cumberland Island missions and drove out the island’s Spanish inhabitants. The French attacked first and raided two of the island’s mission churches. The second attack came after an English pirate, Captain Thomas Jingle, led a failed attempt to take the colonial capital at St. Augustine and brought his six remaining ships to the harbor at Cumberland Island. The Spanish and Timucua fled from their homes, and those who escaped the raids eventually resettled at St. Augustine. 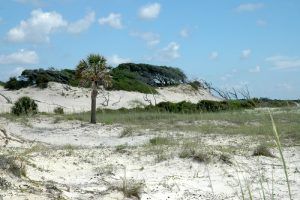 Though the Spanish did abandon Cumberland Island, Spain did not formally give up its claim to the island after the missions closed. Native Americans and independent mestizos occupied the island until James Oglethorpe, the founder of the British colony of Georgia, arrived at the island in 1736. Oglethorpe renamed the island after the Duke of Cumberland, and his colonists built two forts there: Fort St. Andrew and Fort Prince William. The Spanish attacked the forts and attempted to recapture Cumberland Island in 1742 but failed. Spain and England fought over ownership of the coastal region until the Treaty of Paris in 1763 when Spain ceded Spanish Florida to England. Georgia became a U.S. State in 1787, and the United States annexed the rest of Florida after the Adams-Onís Treaty of 1819. 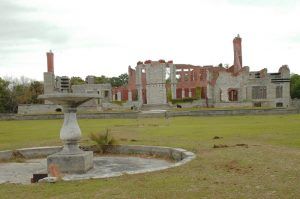 The ruins of the Carnegie Dungeness Mansion, Cumberland Island, Georgia by the National Park Service

Northern industrialist Thomas Carnegie and his wife, Lucy, bought an estate of 1,891 acres on the island after the post-Civil War collapse of Cumberland’s plantation system. Over the years, the Carnegie family bought additional property until they owned 90% of the island. In 1884 the couple began building a mansion for a winter retreat on the site of a former hunting lodge called Dungeness. Thomas Carnegie didn’t live to see the completion of the mansion, but Lucy and her nine children continued to live on the island and named the mansion Dungeness. The mansion was designed like a Scottish castle and contained 59 rooms. The estate also included pools, a golf course, and 40 smaller buildings to house the 200 servants. The last time the mansion was used was for the 1929 wedding of a Carnegie daughter. After the Stockmarket Crash in 1929 and the Great Depression, the family left the island, and the mansion stood vacant for the next 30 years. It burned in 1959. Today, the ruins of the mansion remain on the southern end of the island.

Other elite American families purchased land on the island in the late 19th and 20th centuries and kept private estates there. 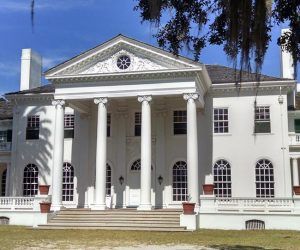 The National Park Service acquired the island in 1972 and created the Cumberland Island National Seashore to protect the island’s resources. Today, the park encompasses over 9,000 acres made up of the marshes, forests, waters, and shores of the historic island. Though no surface evidence of the 16th and 17th century Spanish and Timucua presence is visible today, their history is part of the island’s rich American heritage.

Only 300 members of the general public can visit the island each day, and the park recommends visitors make reservations ahead of their trip. Visitors can access the island by a ferry, which picks up at the park headquarters in St. Marys, Georgia. On the island, park visitors can board park trams or rent bicycles to tour the historic properties and access the island’s public areas for camping, hiking, fishing, swimming, and wildlife watching. Visitors can also take a walking tour provided by Molly’s Old South Tours, which is the island’s only regularly-offered tour covering the Dungeness Historic Area.