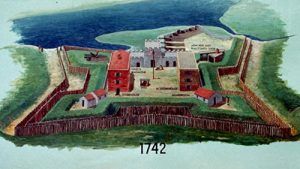 James Oglethorpe built Fort Frederica for the British during the Anglo-Spanish conflict for control of what is now Georgia. Named for Frederick, Prince of Wales (1707-1751), the town housed both a civilian community and British troops between 1736 and 1763. Though a 1758 fire destroyed most of the town, it had been a lively commercial center and military post at the edge of British claims to land adjacent to Spanish territory.

Fort Frederica did more than advance British military interests, however. Under founder James Oglethorpe , the settlement furthered a social agenda that advocated for penal reform and the abolition of slavery. Today, the artifacts and ruins at Fort Frederica National Monument are reminders of both the idealism of this community and the Anglo-Spanish struggle for control in the New World.

The settlement at Fort Frederica was one of several in the colony of Georgia headed by James Oglethorpe. At Fort Frederica, Oglethorpe envisioned a place of employment for people then trapped in British debtors’ prisons. Fort Frederica was to be a community of the “worthy poor” who would tend their own land, using what they produced to support themselves. The emphasis on enabling the poor to support themselves was in response to the mass of landless poor who were ill-served by the British system of marginalization or imprisonment. Oglethorpe also welcomed religious reformers, accepting Protestants fleeing Germany and the Methodists John and Charles Wesley. Oglethorpe was also careful to ensure that the town had people of diverse occupations. For a small community in the British colonies, the town at Fort Frederica had a number of artisans practicing specialized crafts to meet the needs of colonists. In addition to being the home of skilled laborers and farmers, the fort was a defensive structure and active garrison posted with regiments of British troops.

The location of Fort Frederica, in what is today southeastern Georgia, was important to both the British and the Spanish. Great Britain had established 12 other colonies further north and had made definite claims on land as far north as Maine. To the south, the Spanish sought control over the territory between St. Augustine, Florida and Charleston, South Carolina. Georgia lay in disputed territory, often called the Debatable Land by the Europeans.

From 1739 until 1742, the British and the Spanish fought many battles with each other in what became known as the War of Jenkins’ Ear. Expecting invasions by the Spanish, Oglethorpe built a defensive wall that surrounded the entire town and helped to give it a fort-like appearance. The actual fort itself was a smaller building set partially within this wall. The fort was made of tabby, a kind of concrete composed of oyster shells that were used throughout the southeastern United States. Many of the other buildings in the town were constructed at least partially of tabby because it was less expensive and more readily available than bricks. Barracks on the northern edge of town served as quarters for approximately 200 troops and as a hospital and prison for captured Spanish soldiers.

Fort Frederica National Monument was the site of frequent battles between the British and Spanish. Just five miles from the fort town, visitors can see the site that commemorates the Battle of Bloody Marsh, which was fought in July of 1742. Under the command of Manual de Montiano, the governor of Florida, the Spanish launched an attempt to seize British land from Georgia up to South Carolina and sent two thousand troops to Fort Frederica. Led by Oglethorpe, the British ambushed the Spanish troops marching single file through the marsh and routed them from the island, preventing them from taking Fort Frederica. The origin of the name came from the marsh supposedly “running red with the blood of Spaniard.” However, official Spanish records indicate that only seven grenadiers died during this battle. The Battle of Bloody marsh forced the Spanish to abandon efforts to take land in the colony of Georgia and marked the end of the Spanish efforts to invade Georgia during the War of Jenkins’ Ear. With the threat from Spain gone, the British had little need to maintain a military presence in Georgia. Oglethorpe returned to England in 1743, and the regiment he commanded disbanded. The removal of British troops from the community in 1749 took away one of the most important sources of income for the village merchants, and the fort and town fell into decline. A disastrous fire in 1758 left Frederica in ruins.

After more than 275 years, the fort community is now an archeological site with some exposed building foundations and other remains such as portions of the King’s Magazine and the entrance to the barracks. The buildings used by residents of the city included the Calwell House, home of the town’s chandler and soap maker, and the Hawkins-Davison duplex. The Hawkins-Davison houses belonged to Dr. Thomas Hawkins, a surgeon and apothecary, and Samuel Davison, owner of a tavern. The town burial ground has also been partially preserved. During their time at Fort Frederica, John and Charles Wesley preached at services held at the burial ground. Visitors can explore the archeological site on their own or with a digital tour, view the artifacts in the museum, and see a film at the visitor center on how this history was uncovered. These give a sense of how the people of the fort lived, fought, and worked during an important moment in both British and Spanish history.

As a social experiment, the community at the fort demonstrated the need for British penal reform as well as the alternative reform systems contemporary religious and social groups proposed. As a military installation, the Anglo-Spanish clash and ultimate British victory shaped the geography and composition of North America. The artifacts and other objects at the fort tell this unique story.

Fort Frederica National Monument, a unit of the National Park System, is located at 6515 Frederica Rd. on St. Simon’s Island, Georgia. The Bloody Marsh Unit is at 1810 Demere Road.