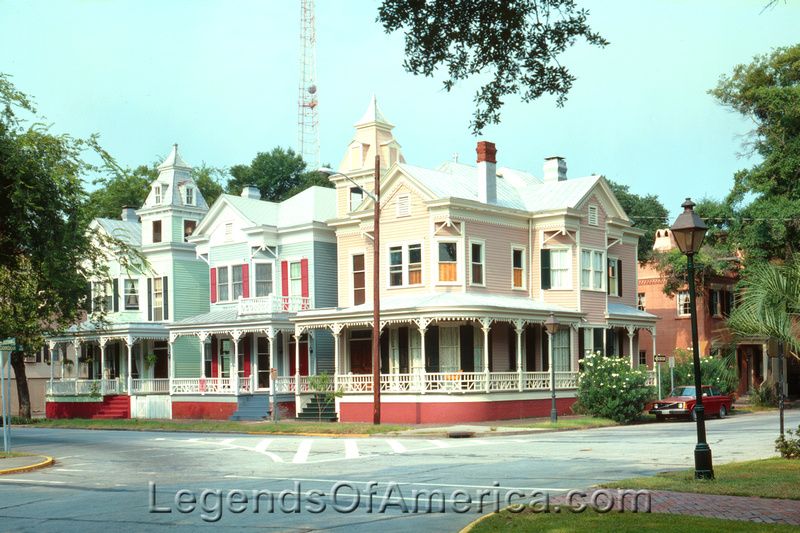 Of all the places in the United States, Savannah, Georgia, has long been considered one of the most haunted and has some of the best must-see historical attractions in the land. If you are interested in historic attractions and love a good, old-fashioned ghost story, then haunted Savannah is just the place you may want to visit. You already know there are different types of ghosts out there, from the apparitions to anniversary ghosts, but did you know they may haunt many of the historical sites of Savannah? Savannah has long been referred to as a “Southern belle” who features a tragic, haunted past. From the cobblestone sidewalks to the moss-ridden trees, the streets of Savannah are gorgeous and reported to be haunted by visitors from the afterlife. Read on for a few of the most haunted historical sites in Savannah and listen in on the stories they have to tell.

The beauty of the 1892 Kehoe House is only marred by the tragic incident that occurred there. The house was originally built for William Kehoe, his wife, and their 10 children. The house rang with laughter until the tragic day; the Kehoe twins were killed while playing in the home’s fireplace. Cherubs that grace the fireplaces now are said to be a monument to the young twins. Guests report hearing children laughing when no children are present, and guests in rooms 201 and 203 of the house report someone sitting on the beds, leaving warm indentations behind. While still not as haunted as some of the other Savannah locations, guests love to visit the Kehoe House for the gorgeous atmosphere and helpful staff. If you’re an avid photographer looking to enter a photo contest, you might be able to catch a shot of the twins playing in the hallway to secure the win of your entry. 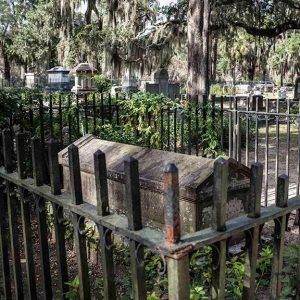 You can’t be an avid ghost lover or enjoy visiting historic sites without visiting a historic cemetery or two. One such graveyard is the Bonaventure Cemetery.  While not the oldest cemetery in Savannah, this is one of the oldest and has its fair share of restless spirits. One of the saddest stories to come out of this historic cemetery is the tale of six-year-old Gracie Watson, who was laid to rest there in 1889. All loved Gracie, but sadly she died of pneumonia two days before Easter Sunday. Her father had a huge statue built of the child. It’s that same statue that visitors to the cemetery have reported walking around the graveyard. There have also been reports of visitors seeing Gracie playing in the streets in front of her home. When touring the cemetery during your trip, make sure to watch out for Little Gracie and any other spirits who might be wandering the grounds.

The Gribble House is one of the most haunted houses in Savannah, maybe even in all of Georgia. The house was the scene of a tragic murder involving three young women in 1909. The women’s killer was never found, and it is said that the spirits of the victims roam the grounds to this day, seeking justice for their brutal murders. Lovers of the paranormal can view the site of the murders with a tour through the warehouse that stands there today, though the house was torn down long ago. Reported occurrences include shadowy figures running through the building, strange lights, and your classic woman in a white apparition. 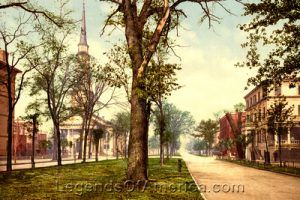 Oglethorpe Avenue in Savannah, Georgia, 1900, by the Detroit Photographic Co.

In the heart of downtown Savannah rests the 17Hundred90 Inn & Restaurant. Having been in business for over 100 years, it comes as no surprise that the inn is haunted and has many tales to tell. The inn is so haunted; in fact, the owners have decided to publish some of the guests’ experiences on their own website for the viewing pleasure of all the paranormal buffs out there. The inn was built in the year 1820, and tragedy occurred rather quickly; after all, yellow fever was rampant in Savannah at the time, and fires were breaking out everywhere. Perhaps, the worst and the saddest story was that of Anne Powell, who, after being seduced by the charms of a sailor on leave, jumped to her death from the window of room 204. Anne is said to rub the cheeks of male guests, lay out nightclothes for the women, and take small trinkets as her own. If you want to see if you can photograph Anne in room 204, do it now because guests book this room months ahead because it is so popular!

Perhaps you have already heard of the Hamilton-Turner Inn, as it was made famous by Midnight in the Garden of Good and Evil. Staying here, guests have heard billiard balls bouncing along the upper floors, seen a man smoking a cigar on the roof, and heard the sounds of children running through the inn playing and laughing when there were no children known to be visiting there. 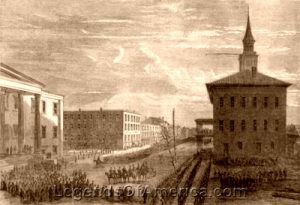 Depiction of General William T. Sherman and his troops enter Savannah,
Georgia in the Civil War.

Perhaps the most haunted and saddest historical site in all of Savannah is The Moon River Brewing Company. It is indeed billed as one of the most haunted locations in the area by many. This famous site has been visited by the team from the popular TV shows; Ghost Hunters and Ghost Adventures. Built in 1821, the building was originally the city hotel. It played host to many famous people and was the popular place for Savannah’s high society to gather.

After the Civil War, the building was also used as a hospital and treated many, many Savannah residents who were struck down by yellow fever. Many ghosts haunt The Moon River Brewing Company’s halls and rooms, some of them friendly and some of them not so much. The most frequent spirits seen are those of the children that possibly died there during the yellow fever outbreak. Also seen is Toby, a not-so-friendly ghost who taunts and haunts anyone who ventures into the downstairs part of the building, and a woman in old-fashioned attire, who will stand at the top of stairs and glare down at the guests below. Not only are spirits seen here, but they are also felt by some people when they are bumped or prodded by something that isn’t there.

These are just a few of the most haunted historical sites in Savannah, Georgia, that you will want to see on a trip to this Southern city. Whether it’s the spirits at The Moon River Brewing Company or the ghosts that haunt the halls of The Kehoe House, if you love history and ghosts alike, Savannah, Georgia, is the place you can visit to find both.

The Founding of Savannah, Georgia

Sherman’s Famous March to the Sea