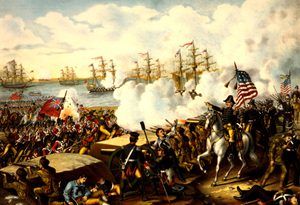 Battle of New Orleans during the War of 1812

A fur trader, Chardon was born in Philadelphia, Pennsylvania. By 1815 he was living in Louisiana, where he fought in the Battle of New Orleans, the final major battle of the War of 1812. In 1817 he was working for Bartholomew Berthold, a prominent fur trader in St. Louis, Missouri. Working with the Osage Indians, he learned their language, took a wife in the tribe, and fathered a son.

He was transferred to the upper Missouri River in 1827, where he became part of the Upper Missouri Outfit of the American Fur Company. There, he went through a series of Indian wives, including an Arikara woman with whom he had two children. Next, he married a 15-year-old Sioux girl, and then another Sioux woman. All left him within short periods.

Chardon remained in the upper Missouri River area for the rest of his life, becoming one of the best known and best-paid fur traders in history. He worked out of various trading posts, including Fort Pierre, Fort Union, Fort Clark, and in 1833 built and ran Fort Jackson. In 1843, he was working out of Fort McKenzie. However, by this time, he had also begun to drink heavily and often left the operation of the post to Alexander Harvey, a callous and violent man.

In late 1843, a band of Blackfoot stole some cattle from the post and killed a black servant. In retaliation, Harvey killed an innocent band of Blackfoot Indians in February of the following year in a cannon ambush, while Chardon was too drunk to pay attention. Before long, the Blackfoot took their revenge and burned Fort McKenzie to the ground.

Later, he built Fort Chardon at the mouth of the Judith River in Montana to take its place. Chardon then moved on to Fort Clark and then helped to establish Fort Berthold, North Dakota, where he was ordered out of the Indian country for selling liquor to the natives. He died, purportedly of rheumatism on April 21, 1848, and was buried at Fort Pierre, South Dakota.