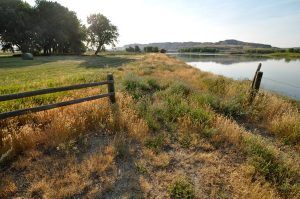 After a fight with the Blackfoot Indians at Fort McKenzie, Montana near the mouth of the Marias River on February 19, 1844, Francois Auguste Chardon of the American Fur Company, in strict secrecy, moved far downriver and constructed a trading post on the north bank of the Missouri River, directly opposite the mouth of the Judith River.

He named it Fort Chardon in his own honor. Francois Chardon was an unscrupulous trader, hated both by whites and Indians, and as a result, the fort was an unsuccessful venture as it was constantly in a state of siege by Indians. In the summer of 1845, Chardon and his partner Alexander Harvey left and were replaced by Alexander Culbertson, a kindly trader with an Indian wife who restored a good business. A short time later, however, the post was abandoned and burnt by Culbertson, so the trading post had a life of only one year.