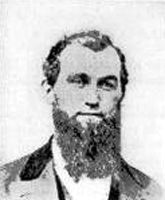 Charles C. Haynes was one of the most prominent drivers on the Overland Stage Line, Haynes was born in Ohio in 1837. He began his staging career in Ohio in 1855, working on the Columbus Pike, which ran between Cleveland and Medina. The next year, he was in Michigan working on the Grand Rapids, Detroit and Allegan Roads. When the Overland Mail Company was organized, Haynes went to Missouri in 1858, first driving on Independence Road.

The following year, he was driving for the Kansas Stage Company on the old Fort Leavenworth and Fort Riley military road. When the Civil War erupted in 1861, the Overland Mail route moved north and Haynes drove a number of routes between Atchison, Kansas and the Rocky Mountains until 1865.

In 1866, he was in California, working for Wells-Fargo. Two years later, he was in Salt Lake City, driving the Montana Road for Wells-Fargo and in 1869, was working the road between Salt Lake City and Austin, Nevada. In the Fall of 1870, he went to work for the Northwestern Stage Company as a division agent for the 275-mile route between Elko, Nevada to Boise City, Idaho. In 1872, he was working as a Division Agent on the Overland Stage line between Boise City to Kelton, Idaho, a position he retained until 1875. After several more transfers to California, Nevada, and Idaho and operating a few small routes on his own, he retired to a ranch on Goose Creek in Idaho. He then bought an old Concord coach built by the Abbot-Downing Company, which he drove for tourists to the Falls of Shoshone, Idaho.

Haynes also served as a U.S. Deputy Marshal under Fred T. Du Boise and Joseph Rinkhaus, was a constable of Shoshone, Idaho for many years, and acted as the first sheriff of Lincoln County, Idaho. 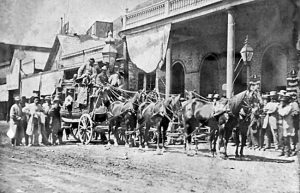