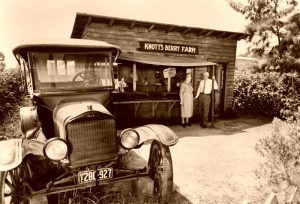 Walter and Cordelia Knott in front of their 1920’s berry stand at Knott’s Berry Farm in Buena Park, California.

The U.S. entered World War I in 1917 and in 1919 there was a victory parade celebrating the end of World War I held at the Orange County Park which later became Irvine. In 1917 the City of Brea was established. The population of Orange County in 1920 according to the US Census was 61,375. Walter Knott set up his first farm in 1920, which is now the spot for a famous theme park known as Knott’s Berry Farm. Women were also allowed to sit on the Grand Jury in the same year. In 1921 the Orange County Library, County Health Department and Eddie Martin Airport had their first opening. In 1922 Duke Kahanamoku brought the sport of surfing to Orange County and KFAW was the first county radio station. Midway City was developed in 1922, halfway between Santa Ana and Long Beach to house people who worked on the oil fields. Dana Point became a recognized development in 1924, La Habra incorporated in 1925 and in the same year San Clemente was recognized but did not incorporate until 1928. San Clemente was referred to as the “Spanish Village of the Sea”. Placentia formed in 1926 along with the Pacific Coast Highway which opened between Huntington Beach and Newport Beach. Tustin and Laguna Beach incorporated in 1927. Nuns from the Sisters of St. Joseph of Orange opened St. Josephs Hospital in 1929 and Ortega Highway construction began the same year. 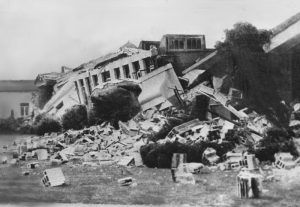 The population of Orange County doubled from 1920 to 1940. In 1920 it was 61,375, and rose to 118,674 in 1930 and 130,760 in 1940. The Doheny Beach State Park was established after the death of Edward Doheny Jr. in 1931 and the first Laguna Beach Arts Festival took place in 1932. In 1933 the Long Beach Earthquake hit and devastated Orange County real estate. Bower’s Museum was opened in Santa Ana in 1936. Great changes took place in Orange County from the time the US entered World War II in 1941 to the end of the 1940s. Two Air bases were built, the Los Alamitos Naval Air Station and the Santa Ana Army Air Base. Colorado River aqueducts provided drinking water to Orange County in 1941. 2,000 Japanese were deported out of Orange County into the Poston War Relocation Center in Arizona. In 1943 the El Toro Marine Base opened. The first county public defender’s office arrived in 1944 In 1946 school segregation ceased and in 1948 Orange Coast College opened. 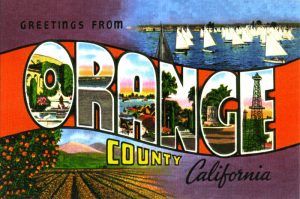 In the 1950s and ’60s, many new cities emerged. The Orange County population increased to 216,224 in 1950 according to the US Census. The California missions were given over to the Catholic Church by the United States in the 1950s and 1960s

Interstate 5 began construction in 1950. Southern California Bible College, currently known as Vanguard University, became the first four-year degree school in Orange County in 1950 after moving from Pasadena to Costa Mesa. The Tustin Navy based reopened in 1951 to support US troops in the Korean War. Buena Park and Costa Mesa incorporated in 1953. Garden Grove, Stanton, and Dairy City, later named Cypress, incorporated in 1956. In 1957, Westminster and Fountain Valley emerge as cities. Orange County State College, later named California State University Fullerton, opened in 1959 in the same year that the San Diego 405 Freeway was built. 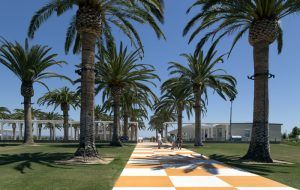 In 1960 the Orange County population increased to 703,925. The City of Los Alamitos established in 1960, San Juan incorporated the following year, and Villa Park became a city in 1962. The University of California Irvine began in 1964. La Palma originated from a former area known as Dairlyland in 1965, and a year later Mission Viejo was founded. Yorba Linda incorporated in 1967 and the same year, Fashion Island, South Coast Plaza, the Orange County Airport, named the John Wayne Airport in 1978 after Newport Beach resident John Wayne died, and the 22 Freeway was built.

Municipalities and commerce grew in the 1970s and 1980s in Orange County. In 1970 the Orange County population rose to 1,420,386 according to the US Census. Irvine incorporated in 1971. In the same year, Rockwell International constructed a one of a kind building called “Ziggurat” in Laguna Niguel, which, in 1974 became the headquarters for numerous federal agencies including the Federal Records Center. The concept for the Irvine Business Spectrum came about in 1975 and 50,000 Vietnamese refugees fleeing the Vietnam War were admitted into Orange County. In 1976 the Orange Freeway 57 was finished and in 1979 the Corona Del Mar Freeway 73 was also completed. In the 1980s cities grew and new centers for culture and commerce emerged. In 1980 the population in Orange County reached 1,931,570 according to the US Census. 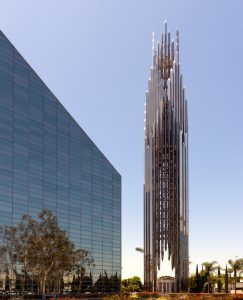 The largest religious structure in the state, the Crystal Cathedral, opened in 1980 and the first nuclear emergency drill was practiced in 1981. A famous writer, Kim Stanley Robinson scribed the first of his series Three Californias Trilogy (or the Orange County Trilogy) titled The Wild Shore in 1984, The Gold Coast in 1988, and Pacific Edge in 1990. The books depicted possible futures for Orange County. The Costa Mesa 55 commuter lane opened in 1985. The Performing Arts Center opened in Costa Mesa in 1986. Dana Point and Laguna Niguel incorporated in 1989.

During the 1990s Orange County experienced a rise in commercial growth and political corruption. In 1990 the population of Orange County reached 2,410,556. Laguna Hills and Lake Forest incorporated in 1991. Orange County filed Chapter 9 Bankruptcy after municipalities gambled the county’s money away in the stock market. In 1994 the Richard Nixon Library (Former President of the United States) opened in Yorba Linda in memory of his death. The Irvine Spectrum Center was built in 1995. In the same year, Republican Assemblyman Scott Baugh from Huntington Beach was indicted on four felony and eighteen misdemeanor counts related to campaign contribution misrepresentation. The most famous political party voted on by the people of Orange County was “none of the above”. In 1998, the “Block,” a shopping center, opened in Orange and a public relations specialist was hired for the first time in history to promote District Attorney Tony Rackauckas of Orange County. In 1999, the El Toro and Marine Corps Air Stations both closed, Laguna Woods incorporated, and Highway 261 was completed.

The New Millennium in Orange County was followed by an upswing in California real estate and government budget cuts mandated by the State. In 2000, according to the US Census, Orange County’s population rose to 2,846,289. In 2000, the Orange County High School of the Arts located in Santa Ana was founded. Rancho Santa Margarita and Aliso Viejo incorporated the following year. Orange County voters agree to have El Toro Air Base turned into a park in 2002. In 2003 Governor Gray Davis was recalled and American action film star Arnold Schwarzenegger took his place. In 2004 and 2005 Orange County residents packed and moved to Riverside and San Bernardino Counties to buy more affordable homes. Now those counties are in a boom and development stage. In 2005, the Visitor’s Bureau of Huntington Beach trademarked the term “Surf City USA.” 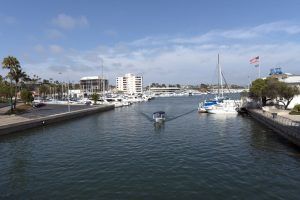 Santa Monica at the End of Route 66