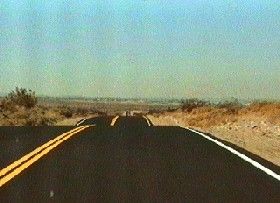 Along the National Old Trails Highway, old Route 66 continues on for some 30 miles from Barstow, California to Victorville. Along this slate-colored stretch, travelers will pass through the small towns of Lenwood, Helendale, and Oro Grande. There was once another little town called Hodge between Lenwood and Helendale, but today, nothing is left of this one time supply center. You’ll know you’re nearing Los Angeles by the gang-style tattooed graffiti upon the remnants of buildings, testifying to better times along this old stretch of the road.

As you leave Barstow on West Main Street, you’ll hardly notice as you enter Lenwood, as buildings continue to dot the road. About 18 miles further down the road, you’ll see a sign that says you’ve reached Helendale; however, you’ll look around wondering where it is.

Unfortunately, Helendale is really not a town anymore, just a smattering of buildings spread among the sagebrush of the desert. Here you can see the remains of the old Burden’s Store and Post Office, which once served as the center of activity in this small community.

Soon, you will come to Oro Grande, a town built on the dreams of early prospectors. Gold never panned out in this old town, but limestone soon became its economic base. Supported today by large Cement Company, there are several old Route 66 buildings here including the Iron Hog Saloon and the abandoned Mohawk Mini-Mart. You’ll also find the largest antique mall in the high desert here – the Antique Station, as well as an old cemetery that dates back to the early days of the miners. 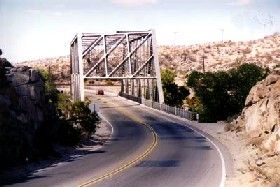 Continuing on the old road, you will cross the Mojave River on a 1930s steel truss bridge as you enter Victorville. Beginning in the mid-1880s, this town was first known as Victor, named for Jacob Nash Victor, a construction superintendent for the California Southern Railroad. An abundance of good water and rich bottomlands soon attracted agricultural development. In 1901 the post office changed the town’s name to Victorville in order to not confuse it with Victor, Colorado. It was about this time that rich deposits of limestone and granite were discovered in the area, which soon led to the cement manufacturing industry, which remains the largest economic focus of the town. 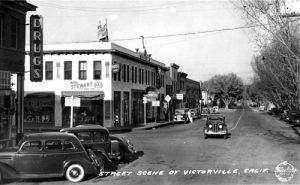 When Route 66 was established through town in 1926, numerous businesses sprang up to serve the hungry and thirsty travelers of the old road. It was during the popular days of the Mother Road, that Hollywood filmed several old western movies in the Victorville area.

During World War II the city became home to Victorville Army Airfield, which later became George Air Force Base. Completed in 1943, the base supported two Tactical Fighter Wings of the Tactical Air Command and employed up to 6,000. Despite all the growth and residents, the City wasn’t incorporated until September of 1962.  The Air Force base was closed in 1992 and was annexed into the city in 1993 as Southern California Logistics Airport. 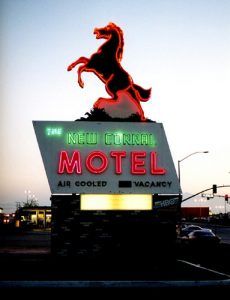 Today this growing town of some 120,000 people still provides vintage looks at its past, at the New Corral Motel at 14643 7th Street, the Best Western Green Tree Inn at 14173 Green Tree Boulevard, and the California Route 66 Museum, housed in the home of the old Red Rooster Café. The California Route 66 Museum established in 1995 maintains a large collection of photographs and artifacts of the history of Route 66. Operating on donations only, the museum is located at 16825 D Street.

Victorville serves as a great get-a-way from the nearby cities, providing area activities including boating, fishing, hiking, and horseback riding.

After touring Victorville, the Route 66 traveler will rejoin I-15 to travel to the Cajon Pass and San Bernardino.