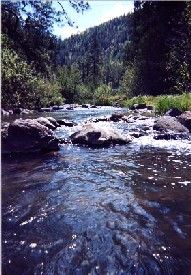 Apache-Sitgreaves National Forests – Diamond Rock Campground – Once called home to the Apache Indians; this campground in the White Mountains sits alongside the East Fork of the Black River. The campsite in a forested valley, shaded by tall ponderosa pines is said to be the site of paranormal activity. According to reports, photographic anomalies of a phantom woman have appeared in photos taken here. Apache-Sitgreaves National Forests, P.O. Box 640, Springerville, Arizona 85938, 928-333-4301.

Bisbee Grand Hotel – Constructed in 1906, the hotel originally was called home to traveling mining executives. In the late 1980’s the entire hotel was closed and renovated to become the elegant Victorian hotel that it is today. Travelers visiting experience rooms and suites appointed with antiques and family heirlooms. They might also experience a couple of resident ghosts. Known as quiet ghosts, a male spirit has often been spied downstairs, while a female is seen on the upper level. But, of these ghosts, all they do is show themselves as they are not known to make a racket or move things around like some many apparitions that tend to lurk about hotels. Bisbee Grand Hotel, 61 Main St. Bisbee, Arizona 85603, 520- 432-5900 or 800- 421-1909.

Clawson House Inn – This former mansion, turned guest inn, has been standing in historic Bisbee since its copper mining heydays. Built by Spencer Clawson, a mine manager in 1895, the inn is said to continue to be haunted by his wife. Also lurking about are the spirits of three miners who were murdered in the late 1890’s. It was during this time that a labor dispute erupted between the miners and the Queen Mine. Outside “scabs” were brought in by the mining company to cross the picket lines. Three of these men who were bunking at the Clawson House were killed by the strikers. Clawson House, 116 Clawson Ave. PO Box 1152, Bisbee, Arizona 85603, 520-432-7434. 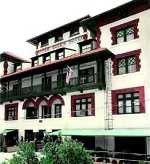 Copper Queen Hotel – Built in 1902, by the Copper Queen Mining Company, the hotel attracted numerous dignitaries and mining executives, as well as flamboyant Old West cowboys and miners during its early heydays. Today, it is said to continue to play host to three resident ghosts. The most famous of its ghosts is a former prostitute by the name of Julia Lowell. Alas, poor Julia made the mistake of falling in love with one of her customers and when he rejected her, she killed herself at the hotel. She, an older gentleman, complete with a top hat, and a young boy have all been seen at this historic inn. Other phenomena includes the aroma of cigar smoke, objects that mysteriously move, the sounds of footsteps running through the halls, and electrical appliances that turn on and off by themselves. Copper Queen Hotel, 11 Howell Avenue, Bisbee, Arizona 85603, 520-432-2216.

Oliver House – Built in 1909 by Edith Ann Oliver, the wife of a local mining official, the house now serves as a 12-room Bed and Breakfast. The building served as a residence, a mining office and a boarding house over the years. According to reports, 27 people died in the house since it was built, including a mass murder and an unsolved murder. Today, it is allegedly haunted by five different spirits. Phenomena includes ghostly footsteps roaming the hallways at night, strange cold spots throughout the building, a rocking chair that moves of its own accord, doors, and shutters that open by themselves, and the sound of water running through pipes that no longer exist. Oliver House, PO Box 1681, 26 Sowle, Bisbee, Arizona 85603, 520-432-1900.

San Marcos Hotel and Golf Resort – Setting the standard for luxury in 1912 and beyond, the San Marcos was the first golf resort in Arizona. Today, a number of strange things are said to occur at this historic resort, including phone calls received to the desk from non-existent extensions, the moaning of man, and the ghostly figure of a woman has been spied.  San Marcos Golf & Conference Resort, One San Marcos Place, Chandler, Arizona 85225,  800-528-8071 or 480-812-0900. 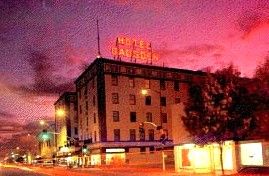 Gadsen Hotel – First built in 1907, the hotel quickly became the home-away-from-home for miners, ranchers, businessmen and dignitaries, including numerous Arizona Governors and Eleanor Roosevelt. Leveled by a fire, it was rebuilt in 1929. Over the years, it slipped into despair until it was rescued in 1988. Today, it is said to be haunted by a headless ghost who some say is Pancho Villa who often spied in the hallways and in the basement. The young spirit of an Indian boy is also been seen on the mezzanine, and an elderly woman called Sara has been seen on the fourth floor. Gadsen Hotel, 1046 G Avenue, Douglas, Arizona 85607, 520-364-4481.

Hotel Weatherford – This historic hotel has been serving guests since its opening on New Year’s Day in 1900, with such visitors as newspaper tycoon William Randolph Hearst, former President Theodore Roosevelt, and lawman Wyatt Earp. Along with its rich history, a couple was reportedly murdered in the hotel in the 1930s. The staff has reported that one employee who was staying in the hotel, awoke in the middle of the night to find a bride and groom sitting at the foot of the bed. In addition, another guest relayed that while taking an early morning stroll through the hotel, he spied the silhouette of a young woman darting from one side of the room to the other in the hotel’s ballroom. Other reports tell of low whispers and voices coming from the empty lounge. Hotel Weatherford, 23 N. Leroux St, Flagstaff, Arizona 86001, 928-779-1919. For the whole story of the Hotel Weatherford, click HERE! 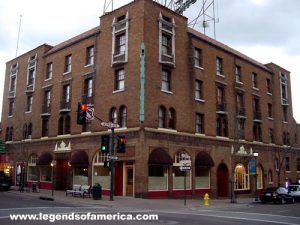 Monte Vista Hotel – Opening on New Year’s Day, 1927, this historic hotel, listed on the National Register of Historic Places has been fully restored to its former glory and continues to serve the traveling public today. Haunted by several ghosts including a phantom bellboy that knocks on doors then disappears, a female ghost has been seen walking the halls, a 1970’s bank robber who died in the lounge, and a long-ago resident of the hotel that can be heard clearing his throat and coughing. Hotel Monte Vista, 100 N. San Francisco St., Flagstaff, Arizona 86001, 928-779-6971 or 800-545-3068. For the whole story of the Monte Vista Hotel, click HERE.

Noftsger Hill Inn – High above the Cobre Valley in the shadow of the Old Dominion mine, this building was built in 1907 as a school. Today the six-room inn, is filled with rustic elegance and framed by mining era houses, stands as a monolithic monument to miners, academics, and architects. Today guests tell of continuing to hear the sounds of ghostly children’s voices at the inn, phantom guests often appear, and footsteps are heard when no one is there. Other phenomena include ghostly spook lights that are said to appear and objects that inexplicably move of their own accord. Noftsger Hill Inn, 425 North Street, Globe, Arizona 85501, 928-425-2260 or 877-780-2479.