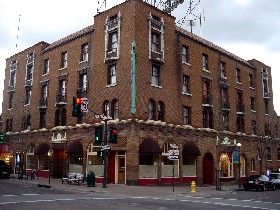 Located along old Route 66 in Flagstaff, Arizona, is the Hotel Monte Vista. Opening on New Year’s Day, 1927, this historic hotel, listed on the National Register of Historic Places, has been fully restored to its former glory and continues to serve the traveling public today. Along with playing host to numerous famous figures over the years, such as John Wayne, Bing Crosby, and Harry Truman, it is apparently home to several unearthly figures.

This old hotel is one of the very few American hotels built entirely from public taxes when, in 1924, a man named V.M. Slipher spearheaded a local fundraising campaign to build the hotel.

In 1924, tourism was a burgeoning business in Flagstaff, where lodging was too scarce to keep visitors in town to spend their hard-earned dollars. Slipher’s efforts resulted in a city-voted ordinance establishing a municipal bond to build the hotel.

After its opening, the hotel was popular not only among the tourists but also a favorite of the locals who quickly coined the phrase, “Meet me at the Monte V.” In its first year, the hotel hosted Mary Costigan’s daily three-hour radio show from room 105. Costigan was the first American woman to be granted a radio broadcasting license.

Opening during the prohibition era, this didn’t stop the Hotel Monte Vista Lounge from ignoring the law and running a profitable bootlegging operation out of Flagstaff’s most popular speakeasy. However, in 1931, the place was raided by local officials and shut down, only to resume business two years later when prohibition finally ended. For five years between 1935 and 1940, the hotel lounge and lobby also offered its many guests a wide range of slot machines to choose from, the only ones ever in Flagstaff. 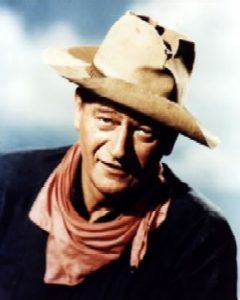 In the 1940s and 1950s, Western movies became the choice of the American public, and more than one hundred movies were filmed in nearby Sedona and Oak Creek Canyon. The Hotel Monte Vista hosted famous guests like Jane Russell, Gary Cooper, Spencer Tracy, John Wayne, and Bing Crosby during these filmings. In one of the hotel rooms, a scene from Casablanca was filmed. In fact, it was John Wayne who reported seeing one of the hotel’s first ghosts in the late 1950s. Describing the spirit as friendly, this benevolent ghost evidently made a brief appearance in the movie star’s room.

In the 1970s, three men robbed a Flagstaff bank near the hotel, where one of the men was shot during their escape from the bank. Lying low and celebrating their successful robbery, the trio stopped in at the Monte Vista Lounge for a drink. However, the wounded man’s gunshot injury was obviously more serious than any of them anticipated. Before he could finish his first drink, he died in the lounge.

Today, staff and guests feel as if this dead bandit is one of the many spirits that haunt the building. One manager reported that he would hear an eerie voice that said “Hello” or “Good Morning” when he opened the bar daily. Others have told stories of feeling a ghostly presence while enjoying a drink in the cocktail lounge. Though this might be the ghost of the gunman, the hotel has such a past of shootings, cowboys on horseback in the lobby, and drunken brawls that they aren’t really sure.

All types of other strange phenomena are reported at the hotel by spirits who make noise, move furniture around, make sudden appearances, ring the lobby telephone, and knock things down. Both employees and guests have heard band music coming from the second-floor lobby when no band is playing. Reportedly, the staff has become so accustomed to the odd occurrences that it has become a joke to them.

In room 210, called the Zane Grey room, many guests have been awakened in the night by a phantom bellboy, who knocks on the door with the statement that room service has arrived. However, when the guests open the door, they see nothing but an empty hallway, not even a glimpse of someone escaping down the long corridor. Others have reported seeing the image of a woman who wanders the halls outside this room. Supposedly, the hotel avoids putting guests with pets in this room because dogs go crazy with fear and tear up the room.

This floor is a hub of ghostly activity, as just down the hall in Room 220, all types of strange activity are reported. Evidently, in the early 1980s, this room played host to an eccentric long-term boarder known to hang raw meat from the chandelier. Sometime later, he died in this room, and his body was not discovered for several days. Today, guests often complain of hearing coughing and other noises from the otherwise empty room. At one time, after a maintenance man had made several repairs to the room, he turned off the light and locked the door. However, returning just five minutes later, the light was back on, the bed linens were stripped, and the television was broadcasting at full blast.

In the Gary Cooper Room, many guests have reported being unnerved by the sure feeling that someone was watching them. Reportedly, two prostitutes were murdered in this room when they were thrown out the window. The two painted ladies have also been reportedly sighted in the pool hall and the lounge.

In yet another room, number 305, the ghost of a female apparition is often reported as sitting in the rocking chair. Further, if the cleaning staff moves the chair, the next day it will always reappear next to the window.

The Hotel Monte Vista is the longest publicly held commercial hotel in the history of America, finally selling to a private individual in the early 1960s. Located at 100 N. San Francisco Street, the old hotel with its tales of scandal and ghost stories, continues to entertain. 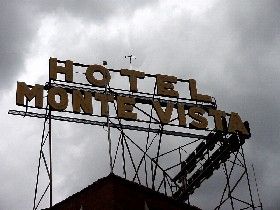